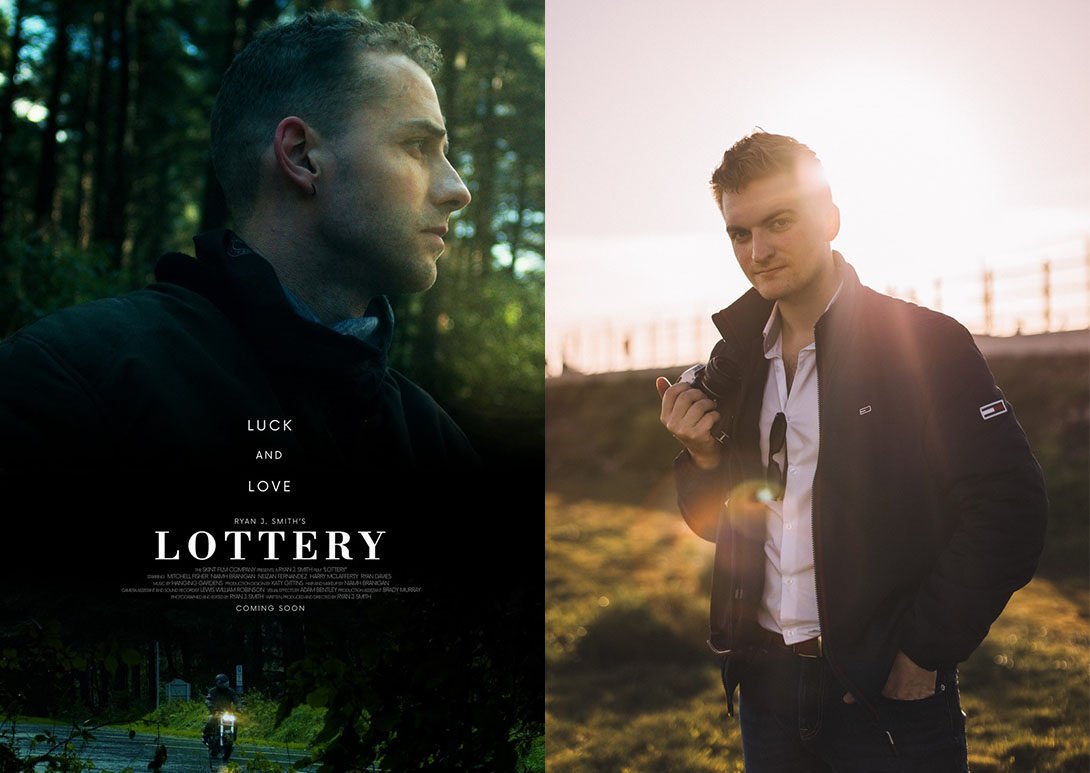 The idea for Ryan J Smith’s debut feature film, Lottery, came to him while he was studying at MetFilm School London.

A graduate of our BA Practical Filmmaking degree, Ryan describes how it took him ‘a couple of years to land on a solid script worth shooting’, but that he ‘got there in the end’. Now, as he prepares for Lottery to hit the big screen at the Regent Cinema Blackpool, we spoke to Ryan about the process of shooting the film, setting up his own film studio, Skint Film Company, and what he considers to be the ‘best part’ of filmmaking.

From documentaries to feature films

Since this project, Ryan described his own evolution as a filmmaker, explaining that he was glad to have waited a couple years to make Lottery.

‘It would’ve been a very different film, much more straight-razored, if I had made it when I was 19 – whereas now, I feel it’s shifted into something much more mature – although my fingerprints from the past are still all over it. It’s more of a tattoo than a film for me’.

Lottery is also the first feature made by Ryan’s own film studio, Skint Film Company, although he is determined not to let the momentum pass him by, having already started work on his next. Talking To Ghosts, a thriller about an arms deal gone wrong, is slated for a Summer 2023 release.

It’s not difficult to work out the meaning behind the name Skint Film Company. ‘Lack of time and resources are always the pitfalls of filmmaking’, says Ryan, ‘there’s never enough of either.’

When we last spoke to him, Ryan described the cost of Red Light Solo as ‘the price of two plane tickets’, and the budgeting of Lottery came from a similar place. After raising the money to make the feature by working as a photographer in a Botox clinic, his goal was to ‘make £7,000 feel like £700,000’ – and in a larger sense, to demonstrate the value of a healthy, self-sufficient studio.

By financing his own movies through his own company, Ryan emphasised the benefits of having control over each stage of the project. ‘It’s all about bang for your buck‘, he added.

‘I spent years trying to get my foot in the door of “the system” alongside well-known companies and producers – and all it did was reveal how scared they all are of change. That’s the reason I decided to set up my own studio.’

However, he is of course not blind to the pressure that comes with being in charge of nearly every stage of the filmmaking process.

‘Making a movie like this will eventually drive you insane, because it’s not a small peak you’re climbing – which is why I’d rather climb it with friends.’

This helps to explain his ‘fun’ attitude to filmmaking: by creating a safe and creative environment, surrounded by trusted cast and crew, ‘the filmmaking process goes from being a clinical affair, to chatting with friends in living rooms and cafes’.

Naming MetFilm School graduates Adam Bentley and Lewis William Robinson as frequent collaborators, Ryan sums up his favourite aspect of filmmaking as ‘being able to work with your friends’:

‘I try to be a good friend first; the whole filmmaking thing comes second.’

The ‘full circle moment’ of Lottery

As Ryan prepares for the first screening of Lottery at the Regent Cinema Blackpool on Friday 18 November, he points out the full circle moment that this represents for his career: his first ever film, a LEGO stop-start animation he created at the age of eight, was screened just twenty minutes away from the Regent Cinema at Blackpool’s Odeon.

Shot in Lytham St. Anne’s, Blackpool, and Garstand, Ryan describes Lottery as a ‘love letter’ to his hometown. ‘I’m very loyal to Lancashire’, he added, ‘and the Regent Cinema is one of Blackpool’s most iconic buildings’.

Ahead of the film’s November screening, Ryan describes early showings as ‘overwhelmingly positive’: ‘Audiences have been picking up on little things here and there that have deepened the story for them and made them want to go back and watch it a second and third time, which is good news for us, the filmmakers.’

‘The goal is always to make something that works differently for everyone’, he concluded. ‘If Lottery is enough to convince one person to roll up their sleeves and make movies – I’m a happy man.’