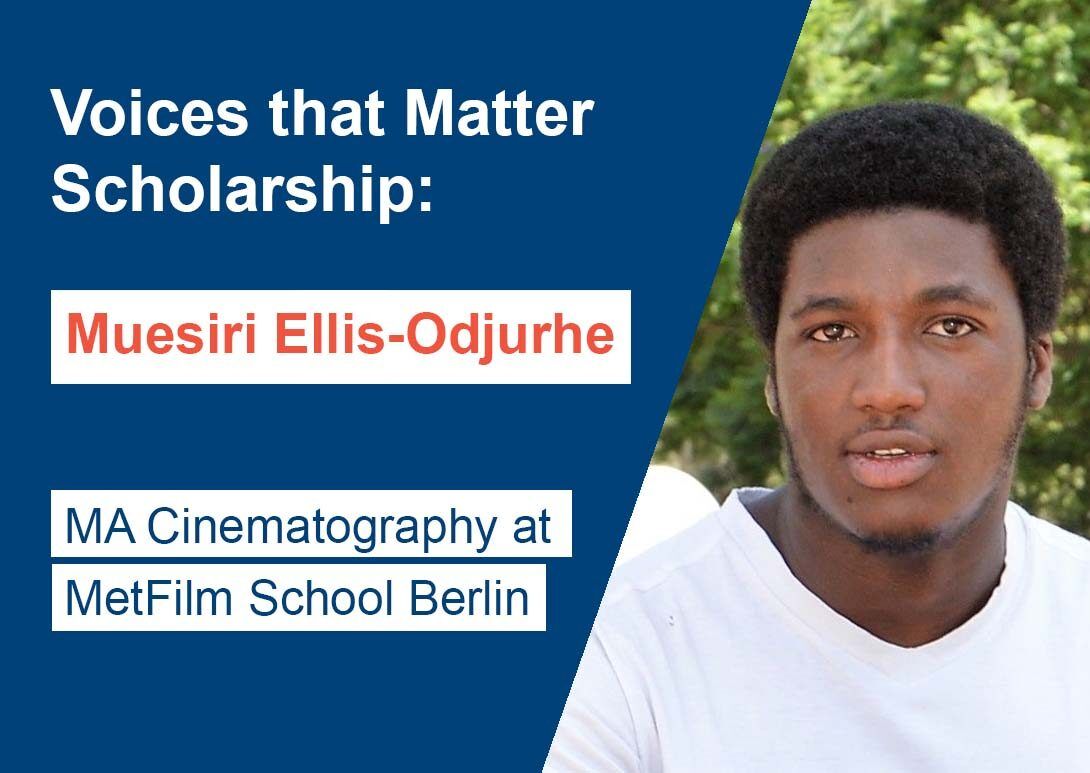 Sunderland University film graduate Muesiri, 22, is Nigerian, but was born in Arusha, Tanzania. He is joining the School’s Berlin campus to pursue a dream career in film.

On receiving the scholarship, Muesiri said: ‘My mum and I currently share a phone, so she was the first person to find out about me winning the scholarship. I was stunned. It took me a while to realise what it meant.’

Afterwards, I was engulfed with excitement, that the months of preparation, worrying, and hoping had finally borne fruit to an amazing outcome. This excitement was eventually accompanied by relief. A relief that I would have the opportunity to continue my education.’

Muesiri has been fascinated by film from an early age. ‘I believe this passion came from being surrounded by VHS tapes and movies from all kinds of genres,’ he said, ‘in addition to being introduced to computers and the internet at around the age of five’.

But Muesiri didn’t consider that he could have a career in the screen industry until he was a few years older. ‘Nearing the end of middle school, I was working on a project where I had to analyse software. I looked at three different pieces of video editing software, and it was while studying these that I realised I had the option to pursue a career in film’.

Muesiri has opted to study MA Cinematography at MetFilm School Berlin. In anticipation of starting the course, he explained: ‘I am excited to specialise in cinematography, I want to build my technical skills. And I am looking forward to connecting with professionals to collaborate on film and creative projects.

I am also curious to see what the art house film scene in Berlin will look like – I’m interested in making short films during my time there.’

Looking to the future

One of Muesiri’s long term goals it to set-up and run his own production company, which he explained is ‘a life goal’ through which he hopes ‘to highlight the stories of underrepresented voices and their experiences through film and media’.

But he’s keeping his options open too: ‘Alternatively, I would love to get some experience working as a producer or editing assistant in the industry. Regardless of which path I end up following, when the time comes, I hope to be in a better position to support my family, and to hopefully encourage other Black youths to pursue their goals and push the boundaries within industries which may not currently fully represent them.’

The Dan Demissie: Voices that Matter Scholarship covers full tuition fees for the selected programme of study, either at undergraduate or postgraduate level, and is assessed based on financial need as well as talent and achievement in the screen industries. The scholarship is worth up to £53,000. Muesiri is the award’s second recipient.

According to the most recent Diamond report, diversity off screen in the British television industry is still lacking. Representation from Black, Asian, and Minority Ethnic groups is particularly low in the roles of Director (9%), Writer (9.6%), Producer (10%), Executive Producer (7.3%), and Head of Production (9.3%).

Learn more about MetFilm School Berlin in this short video