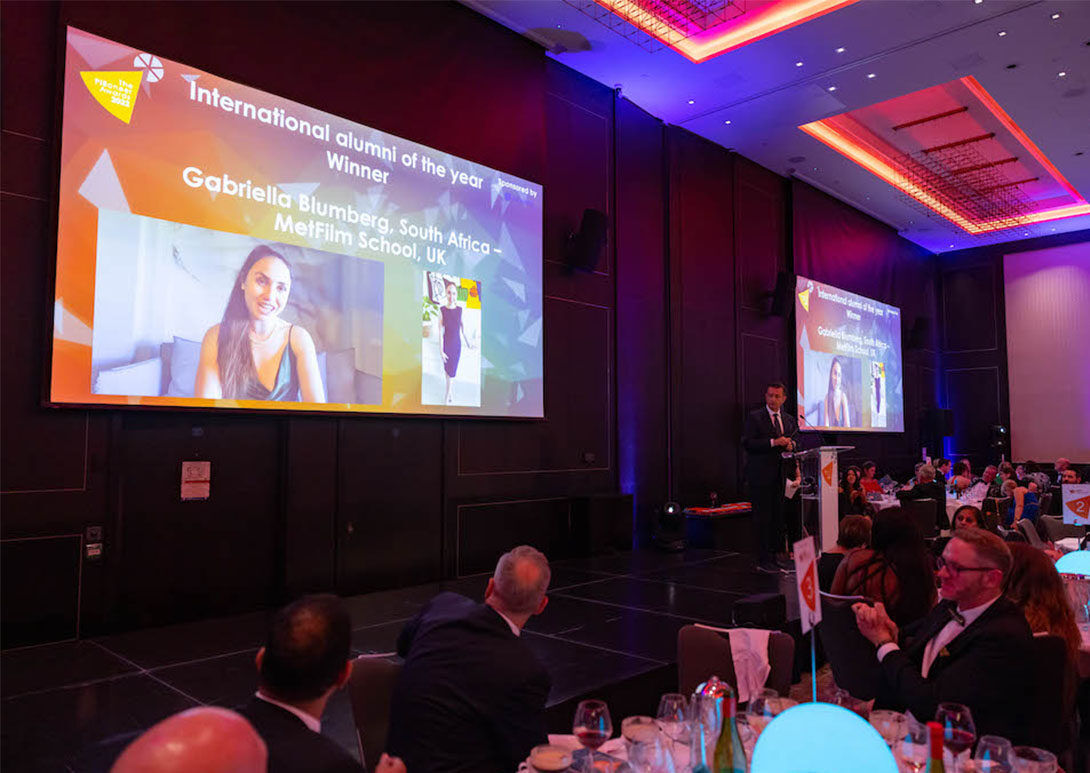 Earlier this year, we shared a blog celebrating the achievements of MA Directing graduate Gabriella Blumberg, who was nominated at the 2022 PIEoneer Awards for ‘International Alumni of the Year’.

When we asked her what this nomination meant, Gabriella shared: ‘It is with great pride that I am nominated for Alumni of the Year, and especially for a film school that both encouraged my creative vision while studying, and continues to stay interested in my career’.

We are proud to announce that at this year’s PIEoneer Awards, Gabriella won International Alumni of the Year, and while she was unable to attend the event in person, MetFilm CEO David Howell and MetFilm School Dean Katharina Koall accepted the award on her behalf.

In our previous blog, we looked through some of the films and projects that had supported Gabriella’s nomination, including her role as producer on Near Not Far, Street Smart, and I Am Here. All three of these films carry important messages promoting change, from Near Not Far inciting change in the South African healthcare system, to I Am Here sharing the story of Ella Blumenthal, a 98-year-old woman who has maintained her feisty, magnetic personality despite facing the horrors of the Holocaust.

How do you find inspiration in your work?

I believe that storytelling is the best way to spark conversation and garner understanding about subject matter that may have stigma attached to it. I am really passionate about making films that have impact and cause.

Can you share any standout memories from the projects you submitted as part of your PIEoneer nomination?

It has been really phenomenal to see how some of the films that I have directed for non-profit breast cancer organisations around the world have been used to create real change. The short documentary “Near Not Far” was presented to the South African Government to encourage better infrustructure for breast health in Limpopo. It is because of this campaign that a breast and cervical screening unit is being set up in the area. This reiterated for me the power of sharing real stories that go straight to the heart.

The PIEoneer Awards honour innovation and achievement across the education industry, and we are thrilled to have been recognised at this years’ awards, just as were in 2019 when MA Directing graduate Juliana Matsubara was nominated for the same Alumni of the Year award.

We are so proud of Gaby, she deserves this – she has used her learning, and her producing and directing skills, to tell stories that will change the way that people look at the world.

Katharina Koall, our Dean, was so pleased for Gaby, as she received the award on her behalf. The event at the Hilton Hotel was a wonderful evening, with over 550 people attending.

The entire community at MetFilm School would also like to congratulate the other nominees in this category, including Yinbo Yu from University College London, and Montita Sowapark from the School of Oriental and African Studies, who were both ‘Highly Commended’ during the awards.

Looking to the future

How does it feel to have won International Alumni of the Year?

It is quite remarkable to be acknowledged in this manner. I am so proud to be associated with MetFilm School who really nurtured my creativity during my time studying there and has continued to stay interested in my progress. The School really helped me understand the industry and opened up my eyes to what is possible.

What type of projects would you like to work on next?

I hope to continue working on films that push boundaries and create positive change. I aim to move into the world of narrative feature films.