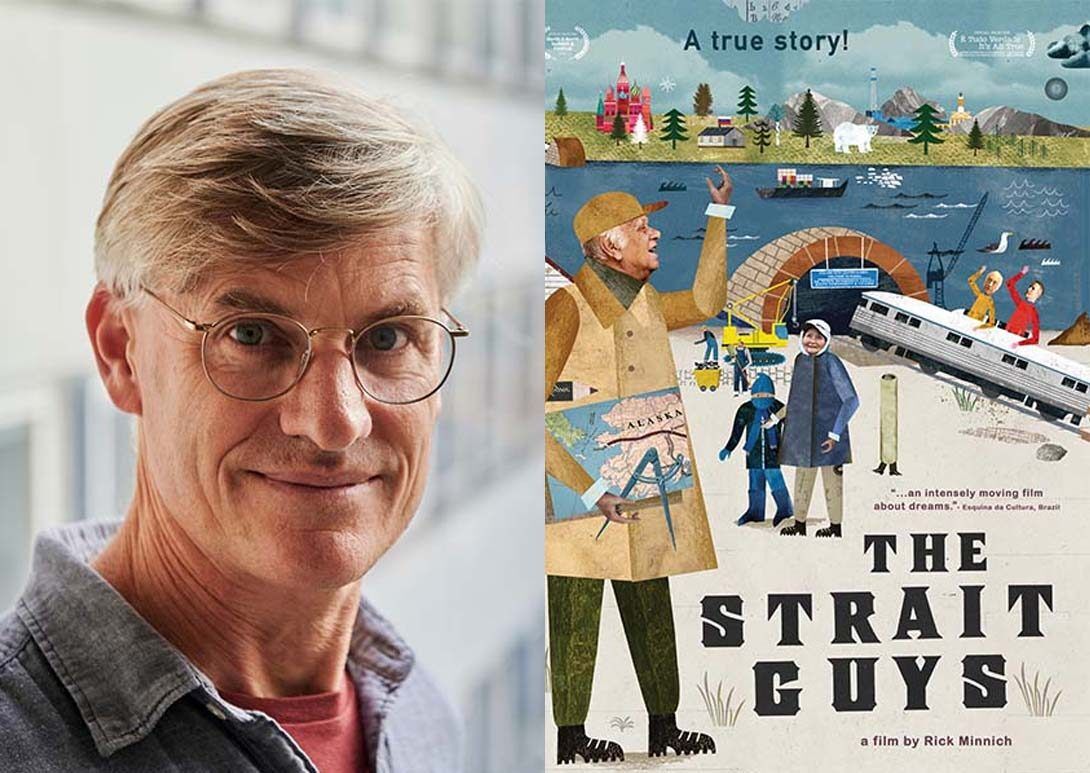 A 76-year-old engineer is on a mission: to connect the United States and Russia in a 100-kilometer long train tunnel beneath the Bering Strait.

This is the summary for The Strait Guys, a new documentary written and directed by MetFilm School Berlin tutor Rick Minnich, who also acted as an additional cinematographer on set. To celebrate the release of the film in cinemas across Berlin (which premiered on June 2 at the Babylon Theater), we spoke to Rick about how he first got involved in this project, what tips he can share about making documentaries, and how his work as a tutor influences his work as a director.

What inspired you to make The Strait Guys?

Sometime during the 1990s, I first heard about the idea of a tunnel connection between the US and Russia – I was intrigued at the concept of linking not only our countries, but also Asia and North America.

Around 2010, I began researching the project more seriously, and that’s when I tracked down George Koumal, a Czech-born mining engineer living in Tuscon, Arizona, who is widely credited for revising the idea of the Bering Strait tunnel (which dates back to the 19th century). Two months after our first call, we met in person at a US-Russian conference in Washington DC, and that’s where I got to know his business partner, Joe Henri.

I sensed that I had stumbled upon a fascinating story, so I spent the next nine years following George and Joe around the world, eventually meeting their Russian partner Victor, their South Korean supporters, and the new Strait Guy, Scott, who ended up playing a major role in the film – and who is now the main engine behind the project, now known as the InterContinental Railway.

Reviews of the film note how well you understand and interact with George, your protagonist. Do you have any tips for aspiring documentary makers?

George Koumal was definitely one of the most difficult protagonists I have ever had. Sadly, I have to speak about him in the past tense, because he died last month. He was an impatient and short-tempered man who could unexpectedly lash out at those around him, including me. This really tested my patience and nerves, and I had to learn not to take his outbursts personally.

Instead, I came to understand them as expressions of his deep passion and vision, and his frustration at the inability to get through to people in positions of power who could make his dream a reality.

As an American expatriate living in Germany, I could also relate to George’s feeling of displacement in the US – so in a sense, I could feel where he was coming from. I think this is key in developing a fruitful relationship between the subject and filmmaker. Even if you disagree with most of what your subject says or believes, as has been the case with other films of mine, you still need to find some kind of common ground, to be able to engage with the person.

How does working on your own projects influence the way you teach students?

I find that teaching at MetFilm School Berlin compliments my filmmaking very nicely. I’m always very curious to see and hear what topics move and inspire young people today, and I try to provide them with the necessary support to tell their stories in the best way possible.

I’ve been making films for thirty years now, and sometimes I fall into old patterns and habits, so it can be inspiring to see how my students often take a completely different approach than I would have anticipated.

At the same time, I often see the pitfalls awaiting them – I try to work through various scenarios with them, to help them see where potential problems could arise, but in the end, it’s vital for them to do it in their own way, and learn from their mistakes. They’ll have enough time after graduating to ‘play by the rules’; I try to encourage them to use their time as students to experiment and risk falling flat on their faces.

What drew you to move to Berlin?

I first visited Berlin in 1989, while doing a semester abroad in Vienna. It was only six months before the Berlin Wall fell, and I was intrigued by the divided city. This was only a couple of years after Wim Wenders’ film Wings of Desire came out, and my buddy and I roamed the city in search of the locations from the film.

After growing up in the US, and spending three months in the USSR (for an internship at Latvian TV in Riga), I had a sense of what life was like on both sides of the Iron Curtain. Living in Berlin gave me the opportunity to experience both worlds within one city, and to witness how the divided Germany slowly reunited.

How has the industry changed since you began making films?

When I graduated from film school in 2001, it was enough to write a two-page exposé to get a film off the ground. Now, broadcasters and funders have become more cautious. It’s a buyers’ market, and they want to see, for example, a pitch teaser to assess how charismatic the protagonists are, and to see some of the locations. This requires spending time and money shooting footage that is good enough to convince funders, and to possibly fit into the final film as well.

I’ve gotten used to this, and have become a decent cameraman and sound recordist as a result, but the multitasking can be a bit overwhelming at times. Fortunately, technological advances have made it much easier to be a one-man band than it was when I was in film school – back then, we were still shooting on film, which was very expensive and difficult to do without a crew!

Finally, what’s one thing you’d like audiences to take away from The Strait Guys?

I would love audiences to leave The Strait Guys understanding that peaceful and productive cooperation between ‘enemies’ is possible – and essential – for survival on our planet. The massive problems of our world can only be solved jointly, not by one nation alone.

We need to learn to work together, despite different ideological, religious, or political beliefs and systems. If we don’t, Mother Nature is going to teach us a lesson we’d rather not learn!

Watch the trailer for The Strait Guys