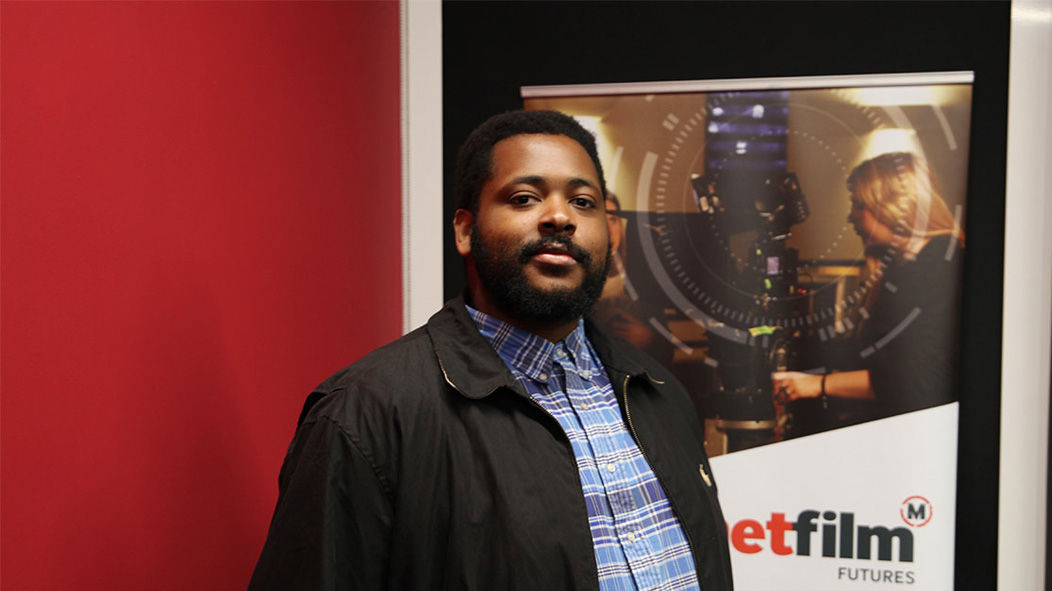 William Alexander Boyd graduated from our two-year BA (Hons) Practical Filmmaking course in 2015, and when on to complete MA Directing here in 2016.

Since then he has gone on to write and direct his own multi-award winning short film ‘The Trespasser’, based on an African folktale told in modern day England, where a grieving man, Emeka (Frank Assi), is trapped in a time loop by a demon known as The Trespasser.

Speaking with Head of MetFilm Futures, Sarah Winstanley, William returned to MetFilm School to take part in a masterclass and Q&A on: ‘what to expect in your first year after graduation’ – sharing his knowledge and experiences with current students, followed by a screening of ‘The Trespasser’.

“When you start out making films, there’s a pyramid. One corner is money, one corner is quality, one corner is time. Unfortunately, in the beginning, you can only have two. Look what you have around you and use that.”

“I use social media a lot! Not as a personal thing, but as a marketing tool.”

“You have to apply to all the festivals. At least 80% send back rejections.”

“To be successful, you have to build a network. The only way to do that is to get out of your house and get talking.”

“When you’re building your network, you have to find people to collaborate with. Remember, a high tide raises all ships. So it doesn’t matter why anyone cares about you; all that matters is that they do and they want to work with you.”

On his time at MetFilm School

“What you don’t realise is that once you’re out of MetFilm School, you don’t get access to the equipment, to the people. You’ve got to make sure that you take full advantage while you are there. You’re only here for a short time, do what you got to do.”

“When you come to film school, you’ve got people all around you that you can connect with on a one to one level. All that support means that you can make a great grad film, and when you leave, you have something to show people.

Watch the trailer for The Trespasser