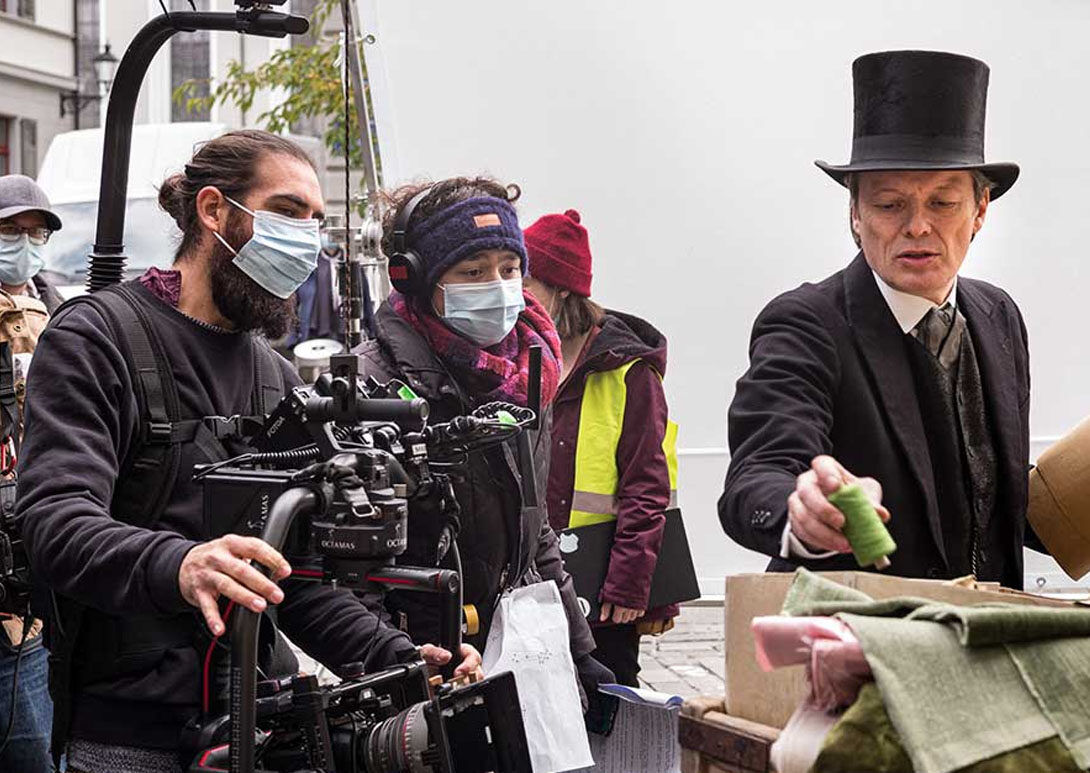 With ambition and imagination in abundance, Swiss filmmaker Raphaela Wagner is the definition of a “one to watch”. Since completing MetFilm School’s Six-Month Practical Filmmaking course three years ago, a lot has been happening. Raphaela has been involved in a number of projects, made a couple of short films, started an MA at Raindance and is now close to finishing her biggest short film to date, the period drama Saitenstich.

The 12-minute short, which is currently in its post-production, was shot last October 2020 in her native Switzerland and is being produced by Ventura Film production company. Set in 1902, it tells the story of a young girl who, despite the curse of having to work in the embroidery industry, tries to realise her dream of playing the violin.

How did you first get involved in the world of filmmaking?

Contrast to most, I rarely went to the cinema as a child and I always wanted to study medicine. But I also loved listening to and telling stories, so I decided to do a gap year after my A-levels to further my creativity and study at MetFilm School. From there I got pulled into the industry and never looked back. I think what I love about filmmaking is the fact that I get to be curious every day. I don’t have to choose a field of study and instead, I get to explore any topic I want.

Tell us about developing Saitenstich! How did your collaboration with Ventura Film begin?

It started with a phone call from one of my MetFilm School friends who happened to be working as an assistant for Ventura Film at the time. They were looking to push new directors and I was asked to attend one of the Swiss film festivals and present them with three projects. With only two weeks to work with, I put most of my effort into the project that I thought had the most potential for the company, which was Saitenstich.

I presented them a little pitch deck with a rough outline of the story, key points of my historical research and why I wanted to make the film. I later learned that my combination of a historical wrong-doing (child work in the textile industry in Switzerland), with the modern and universal theme of believing in your dreams, was what convinced the producers.

Ventura Film commissioned the script and after that, it was down to a lot more research, many script drafts and writing funding applications. At the same time, I was already hunting for locations with my DOP. That was a challenge both because I needed outdoor settings with the right historical architecture, as well as an indoor location with a working stitching machine. To be fair, the development was quite long and draining but totally worth it. Once I got into pre-production, that’s when I got to do all the fun stuff like trying costumes and learning to stitch.

What’s been your favourite project to date?

OnceOne always has a special place in my heart as shooting the short film was such a once in a lifetime experience thanks to the cast and crew. But admittedly it’s a bit of a love-hate relationship. It’s the project with which I took my first steps in the industry and with which I’m learning to make long-format content. So, it tends to be the project with which I make the biggest mistakes but also from which I’ve learnt the most.

That being said, I’m also really excited to finish Saitenstich and get it into the festival run. Keep an eye on my Instagram and website for a teaser trailer shortly!

What is it about the fantasy genre that you find so exciting to write and direct?

The fact that it’s epic? No, I’m joking. I think it’s important to say that, for me, fantasy is not just the big Lord Of The Rings Epic. It can be a small magical moment too, like music. I like to explore the boundary between realism and fantasy and use it to spotlight important themes. That’s really what I love about the fantasy genre, using those magical moments to entertain but also educate to some extent.

Your projects feature strong and determined female characters – do you feel this is something that is lacking in the genre?

I think the genre is changing rapidly in this regard. Personally, the first fantasy book I ever read already had a really strong female protagonist, so that certainly inspired my own work. But aside from female protagonists, I’ve noticed another shift in the fantasy genre recently; stories are starting to move away from the classical European inspired narratives and that, I think, is really really exciting and I can’t wait for those more diverse fantasy stories to be shown on screen.

Which challenges have you encountered in your filmmaking and how do you overcome them?

Saitenstich was challenging in many ways. It was my first entirely Swiss project, meaning I couldn’t work with the fabulous London crew from my previous projects. It is my first time working with child actors and also incredibly expensive to make. It took me over a year to fund it, and I lost count of the rewrites after draft 18. Not to name the countless additional problems thanks to Covid.

However, I think the biggest challenge throughout was living up to my own expectations. I’m well aware of being overly ambitious and can be very hard on myself. When you know just how many people put their trust in you and the money that has been invested in you – you just don’t want to mess it up!

I’m learning to embrace a quote from The Stormlight Archive series by Brandon Sanderson: “‘journey before destination“. Whenever I get into this cycle of questioning my work, I try to concentrate on all the things I get to learn and improve, rather than the finished product and what other people think of it.

What were the steps you took to get into the industry after your short course?

Through MetFilm Futures, I did three weeks of work experience as a runner for the interactive feature Erica, which was a fantastic experience starting out in the industry. The writer actually still teases me today for pestering him with questions on every tube ride home from set – but we stayed friends after that. It’s not every day you get to approach these people on set, but Erica just had a really lovely team. So big shout out to Sara Alves in the Futures team for finding the opportunity.

Other than that, finishing my OnceOne short film was certainly a big one. But also finding new projects, watching Masterclasses, attending film festivals and most of all, talking to lots of people!  You never know who might know the person who’ll make your next film possible.

As someone who has had to get used to juggling multiple projects, what tips do you have on productivity and time management?

Oh dear, I’m still learning that. It’s really easy to get sidetracked, especially when you’re trying to solve something you’re struggling with. But I try to track the hours I work on each project and it also helps me to write down everything I need to do and then split it up so each day is limited to 3-5 things that need doing. That way it feels more doable at the start of the day and it takes less discipline to get started.

Lastly, what three tips do you have for aspiring filmmakers?

I’ll go with three words instead: just do it!

Interested in picking up some new filmmaking skills? Browse our full-time short courses or download a prospectus today!

Watch the official trailer for Saitenstich