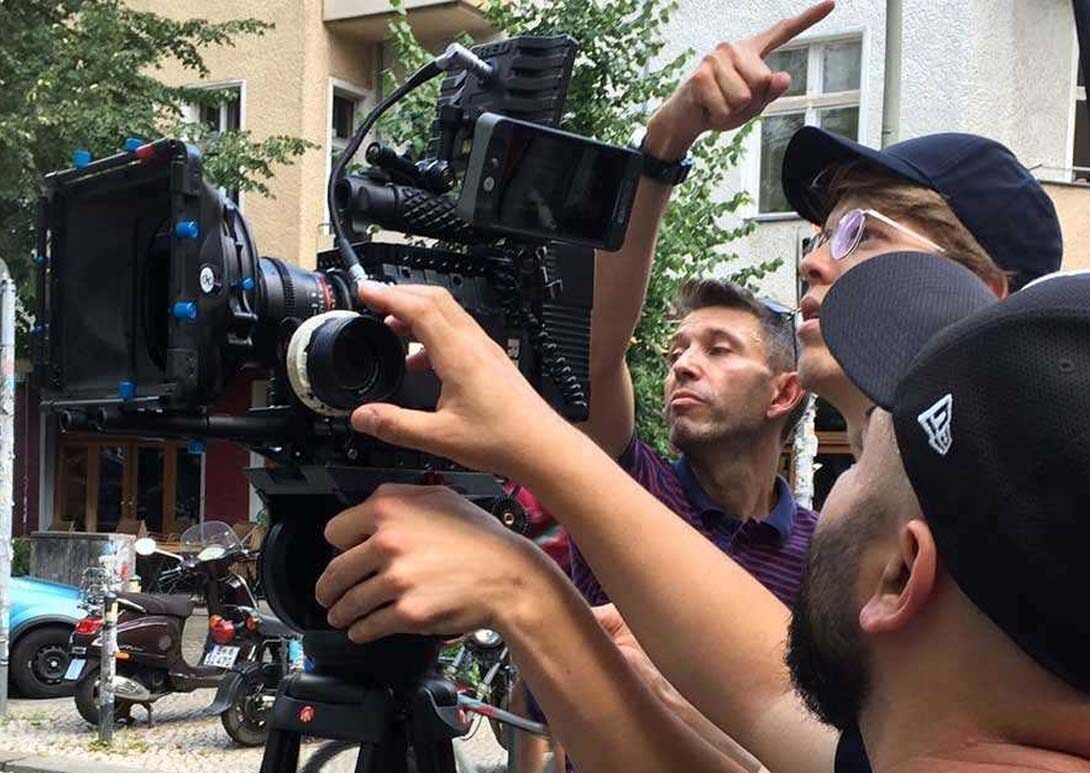 This month, we are sending our congratulations to MA Directing graduate Dean Marriott, whose new short film script, Hold My Hand, has been named a 2021 winner of the highly regarded Pears Short Film Fund at UK Jewish Film. The script was chosen by a panel of industry professionals and has been awarded a £13,500 grant to bring the film to life.

Hold My Hand was one of two winners selected from 62 submitted scripts. The other being Make Me a King, which is set to be directed by Sofia Olins, a filmmaking tutor at MetFilm School.

Dean’s industry background actually began as an actor, having studied at East 15 Acting School. He then joined MetFilm School Berlin as a mature student in 2017 to pick up skills behind the camera that would allow him to explore storytelling on screen.

We caught up with Dean to discuss life in Berlin, working with actors and his award-winning shorts…

As someone who has roots in various parts of the UK & Europe, what for you makes Berlin unique?

The energy of Berlin makes it unique. It’s a capital city, but unlike many other capital cities, it gives you energy rather than drains you of it. It’s young, vibrant and ever-changing.  And change is exciting. It’s literally the heart of Europe, beating hard and fast, day and night, pumping fresh blood and new life into the continent.

Are there particular spots that you find yourself regularly recommending to people?

I’m a little biased here. For the past four years I’ve been living in Simon-Dach-Strasse in Friedrichshain, just off Boxhagener Platz.  It is often referred to as the party mile and attracts both tourists and locals looking for a fun and relatively cheap night out.  There are a huge number of bars and restaurants, and a big vegan community. A stone’s throw away is RAW Gelände: a former railway industrial area which has now become a cultural and creative hub incorporating bars, clubs, artists’ workshops, galleries, restaurants, an open-air cinema, a skateboarding hall and even an open-air swimming-pool.

A 10-minute walk from here is the river with the historical Oberbaumbrücke and the remains of the Berlin Wall at the East Side Gallery.  There are, of course, other must-sees in Berlin: the Brandenburg Gate, the TV Tower, the Reichstag, the Jewish Memorial, a multitude of museums… the list is endless.

You filmed your last short, Next of Kin, in the capital just before lockdown – was it always your intention to shoot here and how did you go about planning your locations?

Yes, I always intended to shoot here. Berlin is an incredibly film-friendly city and it’s very straightforward dealing with people here. Speaking German helps a lot, especially when dealing with the authorities.  When I wrote the script, I already had the external locations in mind. We literally shot these scenes at the end of my street.  For the hospital scenes, I was very lucky to be able to shoot at the largest hospital in Berlin, Charité.  I had to be patient to get the room, but the wait was worth it, and they literally went the extra mile to accommodate me.  Of course, this was a few weeks before lockdown, and the hospital then became out of bounds due to the Covid-19 pandemic.

The project saw success at both Waterford and Raindance Film Festivals. What advice would you give to filmmakers looking to showcase their work through such platforms?

I learnt from my MA graduation short experience that with so many film festivals competing for your submission fees, one has to be selective.  Your film will not suit all festivals, and likewise, all festivals will not be the best platform for your film. Do your research, identify the audience for your film and target the festivals that appeal to such audiences, as they will most likely want to keep them happy.  You want to give your film the best chance of being selected by the most credible film festivals.

Next of Kin is an LGBT-themed short with social justice at its heart. It isn’t a pretty film with British Social Realism as its inspiration. I felt that Raindance would be the perfect fit for this, and fortunately, I was able to premiere there. I mustn’t forget Waterford Film Festival. They were one of the few established European festivals which had a category for short screenplays and offered a great support package to the winner.  I’m a dual national British-Irish, so it made sense for me to apply to this festival in Ireland. Winning the Best Short Screenplay award gave me the endorsement and confidence to push forward with the production.

How would you describe your approach to filmmaking?

I’m a writer/director. I also produced and edited my graduation film, Stolen, and Next of Kin. However, I’m now focusing on writing and directing. I have so many stories and characters fighting for attention in my head. I come from an acting background and have spent my whole life observing others and making use of these references as an actor. I’m now able to combine these with my own life experiences to create scripts which I can then bring to life on screen. I’m often very impulsive when selecting cast and crew. The key things are a personal connection to the narrative, they are conscientious about their job and that we actually get along. This work is intensive, so the last thing you want is to deal with people that you just can’t communicate with.

Do you feel there’s a common thread or goal that links your films together?

Social justice is the backbone of my work. I want my films to raise awareness, generate discussion and hopefully, contribute to society in a positive way. Multilingualism, and not simply multiculturalism on the screen, is also my goal.  I’m fascinated by the use of language in character development and researched code-switching in films as part of my MA thesis.

How has your own background in acting benefitted your work as a director?

I’m a very actor-aware director.  I’ve been in their shoes and know what’s at stake. If an actor feels comfortable with you as a director, you will get the best from them. They need to trust you and be aware that you want the best for them. Actors know their job. They bring a lot to the table. I don’t need to teach them to act. I just need to help them to deliver their best performance.

I want the actors to feel comfortable with every line, every word, to understand the character, the journey, where they are coming from and what their intentions are. So, I make sure we get the time to talk about it before we get to set. Time on set is precious. We are creating a new world and in this new world, I want the actors to live and breathe as their characters.  Nothing more, nothing less.

Congratulations on securing funding for your next project, Hold My Hand. What can you tell us about the project?

Hold My Hand is a bilingual German-English narrative short which examines the concept of memory through the eyes of Esther, an elderly Jewish lady with mild dementia. In 1939, as a child, Esther was evacuated from Berlin to London as part of the Kindertransport programme. After meeting her great-granddaughter’s boyfriend, she has flashbacks to her childhood in Berlin and, finally, the opportunity to fulfil an outstanding promise.

This project is partly inspired by my childhood memories of my Jewish great-grandmother and partly by the reminders of Jewish history that I witness on a daily basis here in Berlin.

How is pre-production going and how are you managing around current lockdown restrictions?

I struggle with the lockdown. I crave tangibility and still feel uncomfortable with this virtual environment we are confined to at the moment. But this is the current reality, so I’ve had to deal with it.  Fortunately, it’s been a positive experience. On the back of Raindance, I teamed up with Steven Jeram of 136 Films, a London-based producer. He was very keen to collaborate on Hold My Hand, and we worked hard to put together a solid pitch for the Pears Short Film Fund at UK Jewish Film. We presented shortlisted locations alongside a stellar provisional cast. Everything has been done online with all meetings via Zoom including our pitch. I still can’t get my head around the fact that I haven’t met anyone involved in this project in the flesh yet!

What do you hope to achieve with the project?

Hold My Hand will premiere at the UK Jewish Film Festival in November 2021. Naturally, I hope that the film promotes discussion and does justice to the Jewish community, especially those with personal connections to the Kindertransport programme. From my research and dealings with numerous Jewish organisations and historians, the issues highlighted are already generating interest.

For me personally, making this short film is another step towards my debut feature film. In order to be taken seriously in any industry you need credibility, and that’s what I’m trying to build at the moment. One step at a time.

Watch the trailer for Next of Kin here