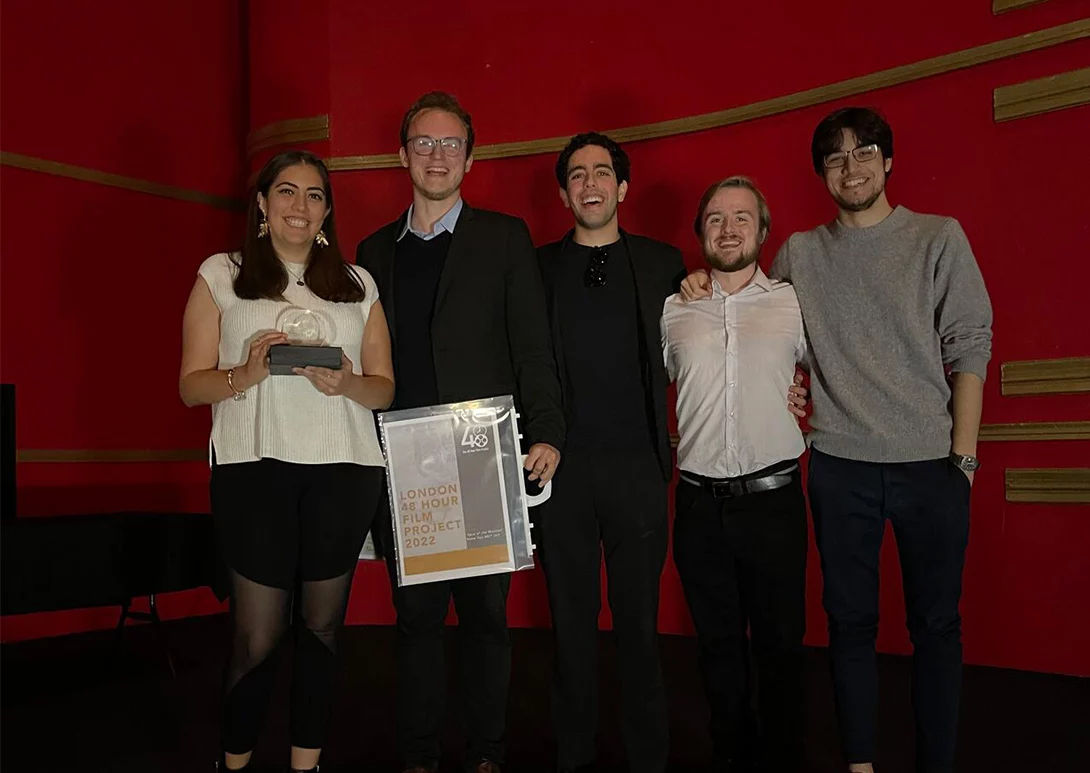 The last few months have been filled with celebration for Max Mir, a graduate of both our BA Practical Filmmaking and MA Directing degrees.

In mid-October, Max Mir, alongside co-director on both projects, Matthew Poole, joined forces with a group of BA & MA students to enter the Straight 8 Competition, which includes the difficult criteria of shooting on a single roll of Super 8 film, with no opportunity to edit. Their final piece, Dead Funny, made the ‘Top 8’ selection.

Following this win, Max took on the 48 Hour Film Project, which true to its name, gives teams two days to write, shoot, and edit a film. Spur of the Moment, their final piece, ended up winning four awards:

In today’s blog, we spoke to Max about these wins, his advice for first-time competition projects, and what he’s working on next…

When did you realise your passion for filmmaking?

As a child, I wanted to act on stage, but everything changed when I watched The Nightmare Before Christmas. I was around 7 or 8, and had actually refused to watch it a few times prior, thinking it would by terrifying. After watching it for the first time, I instantly turned to my father and asked him how I could do something like that.

My first homemade short films were stop-motion, but I slowly transitioned into live-action as I started to learn more.

When you’re coming up with ideas for new projects, what’s your favourite step in the process?

That’s a tricky one! Every time is different. For my latest short film, it started from a really engaging dynamic between two characters, and we built the story around that because – thankfully – it was interesting enough. Usually, though, my ideas come from images that I see in my everyday life.

I’m pretty observant, so I’m always looking out for interesting characters, visuals, little unique moments… They don’t always turn into full ideas but might become moments in a future scene.

My favourite part of the process is definitely prepping for the shoot, working on the visuals and the characters alongside each department. I usually prep a lot: I make floor plans, storyboards, shot references, test shoots, and mood boards that might not even necessarily reflect the final product, but which help the team and I get ready both creatively and mentally.

You were recently one of the winners at the 2022 Straight 8 Competition. How did the competition criteria challenge you as a filmmaker?

I remember finishing the shoot, and all of us just went: ‘We need to make more stuff on film!’

The main thing for us was the amount of prep required from the camera team and directors – but it was really fun having to figure out how to shoot it. I think that working with one roll of film, rather than limiting us, actually benefitted us. It made us think of every decision we made, every frame, shot size, camera move…

We put a lot of work in, and test shot several times on a phone, making sure pacing and comedic timings landed nicely. We also had many conversations with our Cinematographer (Oscar Miño, MA Cinematography) on what might be ‘too risky’, and what did and didn’t work, because we were all really nervous about it.

And in another recent contest, the 48 Hour Film Project, you had just two days to make a film. How did you find keeping to such a short timeframe?

I met with our Producer (Gloria Gzz, MA Producing) several times before, to prep as much as possible. Before the challenge started, she had already lined up our cast, some props, and a few locations. Having to do all of that during the challenge would’ve been impossible!

Regarding the timeframe, we knew we had to divide our time wisely, so we had agreed that on the evening of the kick-off event, we’d brainstorm ideas and begin writing. We mostly followed our schedule, but we definitely got caught up with the brainstorming process.

I think we took around five hours to finally choose a story, and then our superhero of a writer (Enrique Pereira, MA Screenwriting) worked all night on an amazing script. Same thing happened with our editor (Sarah Ashley Ditchfield, MA Post Production) – she stayed up all night to edit, sound mix, sound design, and colour grade, while Matthew Poole and I, as directors, tried (and failed) not to fall asleep.

You mentioned that after your ‘Best Film’ win, you’ll be heading to LA next year for the finals. How did you and the cast/crew celebrate your big win/s?

We completely lost it! There were so many great short films that we were sure we’d be lucky if we made it to the top 10. There was a lot of networking to do, so we all went to the local pub with the other contestants to celebrate together. A lot of people came up to us to say how much they liked the film, which always means so much.

One of my favourite memories was during the ceremony, the team thought they’d seen Enrique’s name in the list of nominated screenwriters. When we saw his name on the screen, we were euphoric! Somehow, we managed to win Best Writing, Actor, and Editing, alongside a Best Soundtrack nomination – and that was all before the final prize!

I can still remember all of us jumping with joy every time our film was nominated.

After these recent wins, do you have any advice for students or filmmakers entering their first competitions?

Just do it. Seriously. With both challenges, there was a lot to worry about, and it was a bit frightening at first – you never know what you’re going to face. But I promise that it will all come together, and in the end, you’ll have made a new film!

After watching so many short films this October, my advice to anyone entering their first competition is to make your ideas simple and straight to the point. You might think you’re not pushing yourself, or that it’s ‘too simple’, but you will definitely stand out amongst the filmmakers who have been too ambitious.

Another thing is to think about how your film stands out – in the Straight 8 contest, we asked ourselves how we were using the camera. And in the 48 Hours, how well were we sticking to our criteria? Or our resources? Making your ideas simpler will also make these questions easier to answer.

Having studied on both our BA Practical Filmmaking and MA Directing courses, how did you find this transition?

The transition was great, especially since I knew how the School worked, and some of the staff. The BA Practical Filmmaking course was so hands-on, and we covered so many departments that I did find myself having a slight advantage. For example, I already knew how to use the sound recorder, or a lot of the camera equipment.

Also, most of the directing lessons from the BA also applied to the MA course, which made it a good foundation to an advanced directing approach. The MA course still had a module to catch everyone up to speed, but having done the BA first, I felt much more confident.

Finally, what are you working on next?

Professionally, I’m currently 3rd AD’ing, directing some corporate work, and soon I’ll be flying to Ibiza as part of the writing team of a Spanish documentary that will air later this year (busy November!).

Regarding my own work, I’m finishing my Graduation Project, Walking Fernando, and working on my next short film. Plus, since we were one of the winners at Straight 8, we get to enter again in 2023, so we’ll be filming that in January!