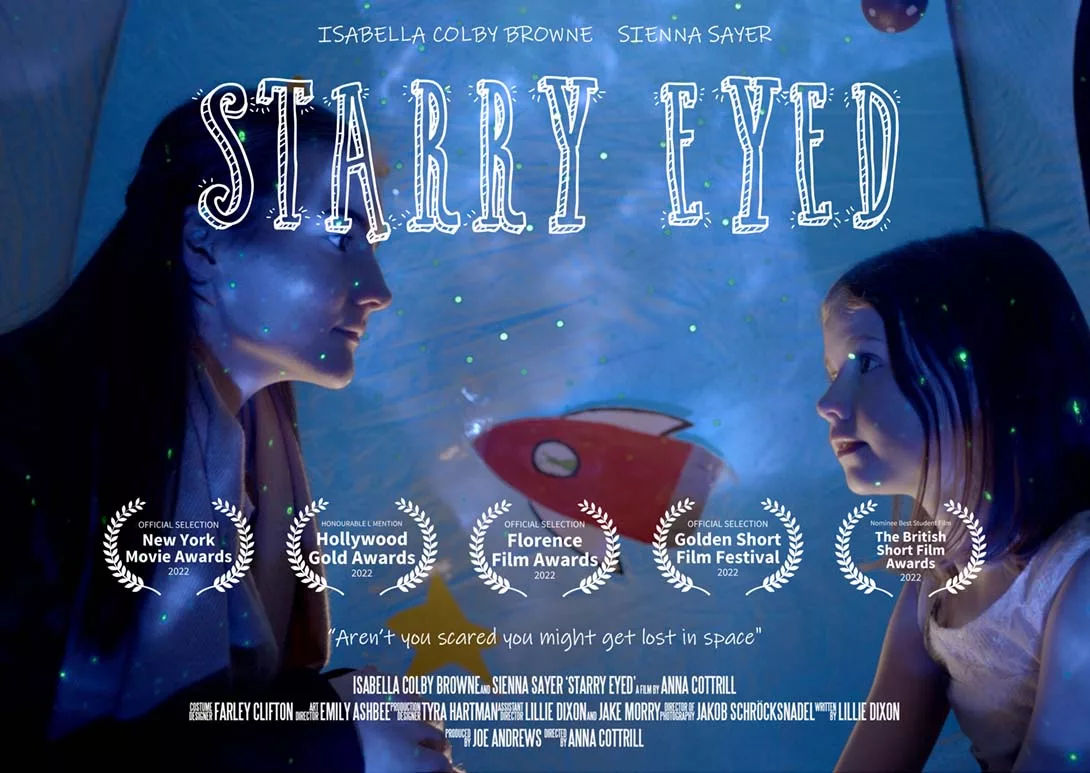 For BA Practical Filmmaking graduate Anna Cottrill, December 31st was not just New Year’s Eve – it also marked the final countdown to Starry Eyed, her latest release. The short film follows Olivia, a cynical adult who, after finding an old aspirational diary from her childhood, is transported back to the mind of her 10-year-old self, and is available to watch now.

Starry Eyed has already seen major success on the festival circuit, receiving an ‘Honourable Mention’ from the Hollywood Gold Awards, as well as making the ‘Official Selection’ at the New York Movie Awards, Golden Short Film Awards, and Florence Film Awards. Not only this, but the film was produced by Parakeet Media, a production company founded by Anna Cottrill and three friends (and MetFilm School BA graduates): Joe Andrews, Peter Lavery, and Jakob Schröcksnadel, who had previously worked together on Peter Lavery’s award-winning short Tequila Dreams.

In today’s blog, hear from Anna Cottrill about the inspiration for Starry Eyed, why she is so drawn to themes of childhood, and her advice for students considering a film degree (perfect for the approaching UCAS Deadline!)…

How did you come up with the story behind Starry Eyed?

Starry Eyed is about reconnecting with your inner child, so to pinpoint the exact moment I had the idea, you’d probably have to talk to my therapist…

Jokes aside, the story comes from a place of genuine truth – when I’m developing a story, I always find that it’s a very introspective journey. One key external spark for the piece came from reading a Picasso quote, ‘Every child is an artist. The problem is how to remain an artist once he grows up’.

I felt quite an emotional reaction to this quote, a strange mix of nostalgia and grief for my younger self, and more specifically for that magical outlook on the world I had as a child. I knew there was something there that I wanted to process, so I did what I always do when I need to figure something out – I started writing.

Were there any stylistic choices you made to help portray the theme of reconnecting with your inner child?

The theme of childhood opened a world of both possibilities and challenges for the film – the main one being that I set most of the film inside a diary (which, unfortunately, is not a location you can rent!).

I wanted the art style of the set to feel grounded in the reality of a child’s mind, despite it being a fantasy location, so to do this, we painted the entire set onto canvas in a simple cartoon style. The aim was that the hand-crafted style, once scaled up, would allow the audience to experience both the awe and the magic Young Olivia feels, while still understanding the hesitancy and realism she has as an adult.

I also chose to express the way that Olivia starts to remember and reconnect with her younger self in a stylised way, such as a flashback portrayed as a high-intensity advert for a ‘Disco Diva Air Chair’, or a musical number about an animal vending machine breaking out. I’m aware this sounds like utter madness… and it kind of was – but that’s what I wanted to go for. Olivia is so disconnected with her inner child that nothing is predictable.

Childhood is a topic you’ve explored a lot – what do you enjoy about this area of storytelling?

Childhood is a theme that really inspires me to my core. I think I enjoy it, on a basic level, because it’s something so universal.

I also think that, at its core, I want to explore childhood to hopefully go through a shared experience with my audience. Each time I explore this theme, I end up connecting with my inner child, and a part of my own self-reflection ends up on the screen. I wanted to explore childhood for the adults, more than the children; to remind everyone who might have forgotten that the excited kid inside of them, the one who dreamed big, is still there.

As with some of your past work, Starry Eyed is produced by Parakeet Media, your own company. How are you finding the role of producer?

Parakeet Media is still in its early days, but so far we’ve done a combination of work, from music videos and promotional videos, to our own shorts. It’s been a valuable learning curve, getting to experience the ups and downs of finding your footing in the industry, but it really helps that Joe, Peter, Jakob, and I are doing it together.

What we’ve found really useful is to focus on the small stuff as much as the big exciting ideas. Communication is vital, and so after every project, big or small, we have a full debrief to highlight our strengths and weaknesses. That way, we can make a better-informed plan for next time, and continue to up our game.

It can be easy to feel like you need to everything perfectly after film school – drop that attitude, it gets in the way of your growth as a creative. Celebrate your wins, analyse your mistakes, and then continue to grow on the next project.

How has your BA Practical Filmmaking degree helped with starting Parakeet Media?

I think the degree being so practical really helped. It means that we all have real life set experience alongside lessons from our tutors, which means we aren’t wandering into the industry blind.

In a way, it’s as though, when we made our films at MetFilm School, we were riding bikes with stabilisers on – now, as a company, we just have to take the stabilisers off, rather than learn to ride the bike from scratch.

Finally, as a film school graduate, and with the UCAS Deadline approaching, can you share any advice for those considering a degree in film?

The benefit of film school is that it gives you the opportunity to put yourself out there, to meet other creatives and to learn and grow. You could sit at home and learn everything you need to know about making films on the internet, for sure, but it takes a village to make a film.

Make connections, go and find that other person who wants to film the horror romance about singing eggs. Film school is a funny place – if you pitch your ideas, collaborators will come, and maybe Love, Death, and Eggs: The Musical will end up as your graduation film… you won’t know until you try.

You have great films inside of you, so don’t be scared to put yourself on the path to making them.