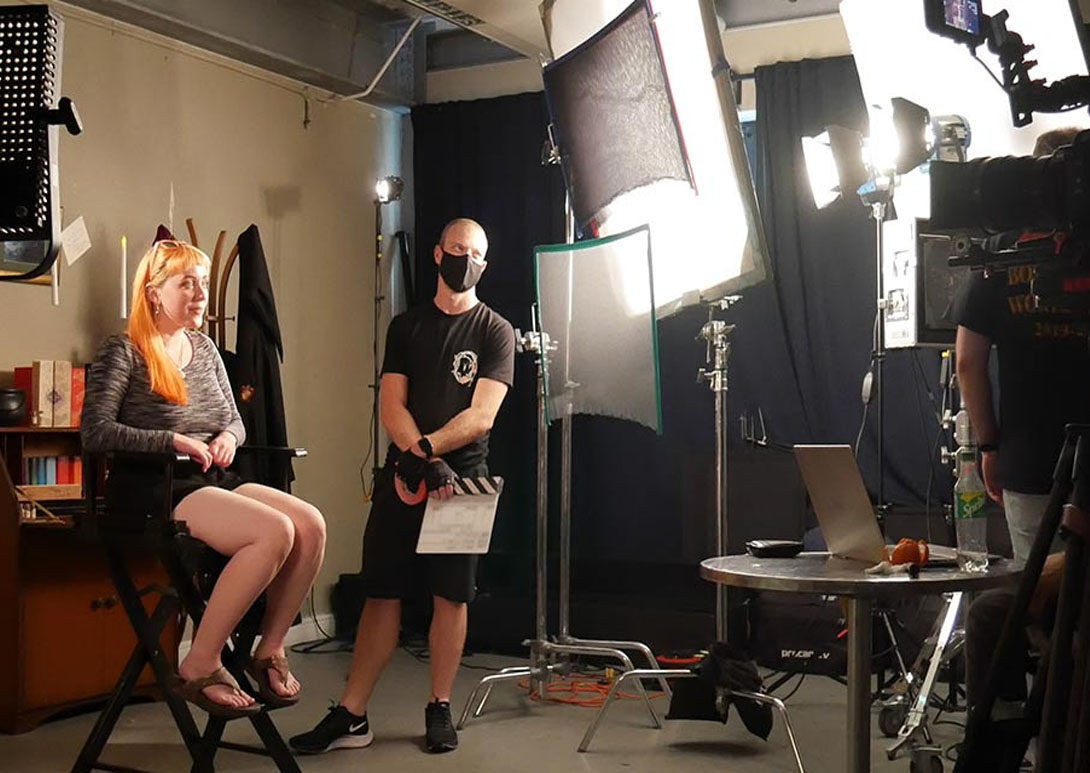 If there’s one thing that unites the MetFilm School community past and present, it’s being a passionate fan of all things popular culture. Now there’s a visual representation of our nerdy obsessions in the form of The Fandom Presents – a new episodic YouTube series made by our students, celebrating some of the world’s most popular film franchises including Harry Potter, Star Wars, Lord of the Rings and Marvel.

Each episode is dedicated to a different film series and sees fellow students go head-to-head in a range of fun, challenging activities to see who truly is the biggest fan. Shot onsite at the School, the sets are lovingly adorned with relevant merch and homemade props that help bring the humorous and snappy show to life.

The project is a truly collaborative effort, with the crew and interviewees made up of students from our three BA courses and six MA courses. Here the series creator and producer Joshua Smith, director Sebastian Zavala, and line-producer Imogen Scawen discuss in their own words, the joys of putting The Fandom Presents together…

Joshua: The motivation was to create a relatively simple concept but to do if effectively; producing a uniquely entertaining and easily replicable project on a cost-friendly budget. Throughout my time studying at MetFilm School, I’ve learnt that one of the defining attributes of the producer’s role is expectation management, so the aim was to be as realistic as possible given the current impact of the pandemic. The project was then ultimately formed out of my personal fascination and consumption of digital media and my passion for popular culture.

Joshua: The next step was actually assembling our crew, which I did through a pitching session. To my surprise, we went from no crew to a full crew within just 24 hours, with the idea attracting quick attention from a range of pop culture fans who wanted to get involved. From this point, we established the simple mantra of the project, being ‘about fans, for fans, by fans’.

The energy, passion, and humour you see on screen was present every day on set, which was a much-needed distraction from the chaos of 2020. Every single member of the hardworking crew invaluably contributed their own unique experiences and I believe we created an entertaining series that we hope will leave a smile on the face of our viewers and a desire to watch more!

Sebastian: I was interested the moment Joshua pitched me the idea. It sounded really fun and something I would enjoy watching in my own time on YouTube. I’m a big fan of cinema – particularly geeky franchises – so developing something that would honour the stories and their fans was irresistible. We managed to put together such a solid crew, so the process of making it happen went without a hitch. It’s a show made by fans for fans that hopefully conveys the joy we feel while watching these films.

Imogen: I was drawn to The Fandom Presents because of the sense of community that is created when people share their unbridled passions and experiences with a particular fandom. My hope for this project is that audiences will find the videos as relatable and as funny as we did when we were filming them!