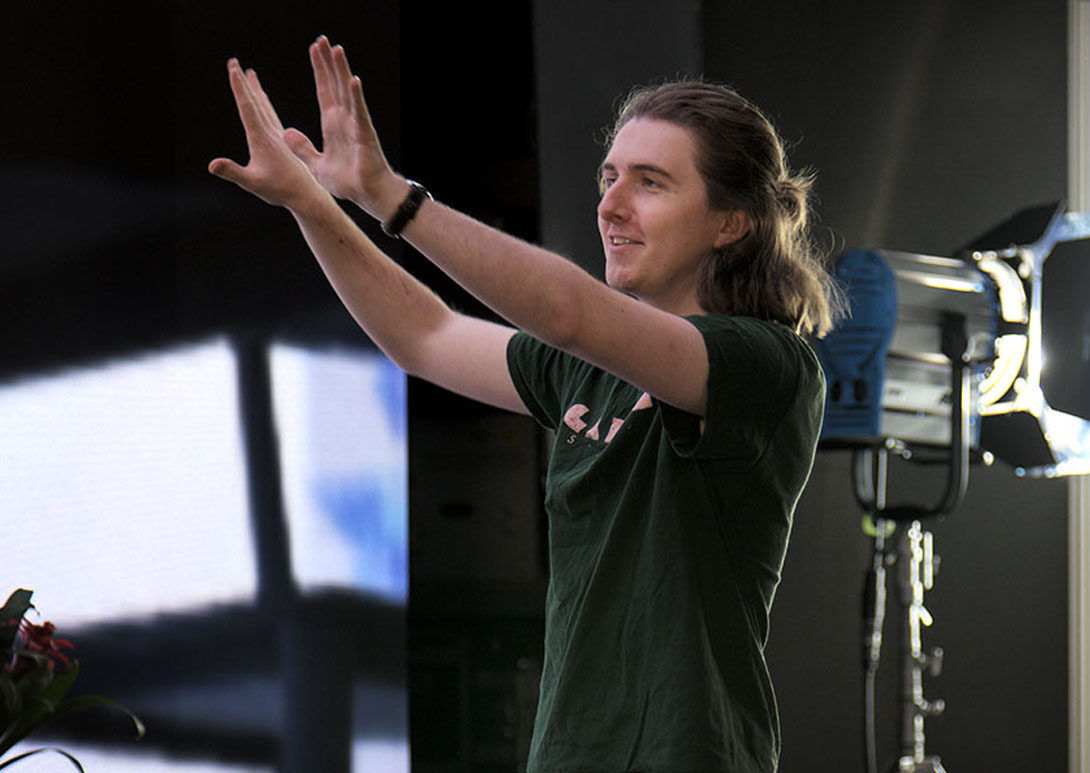 While in his second year of our BA Content, Media & Film Production, Sam Kemp started working at Garden Studios, a state of the art and sustainably-focused film studio which partnered with MetFilm School in 2021. Having completed his course, Sam now works full-time as a Virtual Production Technician, alongside running Window Zebra, a production company he serves as Technical Director for.

Hi Sam! Can you tell us a little about your role at Garden Studios?

I work as a Virtual Production Technician, which encompasses a wide variety of disciplines. On the hardware side, it’s my job to ensure our tracking systems, image processors, and LED walls are all functioning at peak performance – which includes calibrating the tracking to different cameras and managing our colour pipeline.

I’ve also trained in Unreal Engine (the game engine we use to render 3D graphics). My role involves manipulating the digital props that build up a scene, working with the Director of Photography to light the scenes, and coding custom triggers to perform interactions between the physical and digital scene.

Then there are things like developing new control systems for the software we use and even teaching about Virtual Production. I’ve co-led a number of sessions with ScreenSkills on the very technical sides of the craft, as well as teaching some of the basics in sessions with MetFilm School students.

What first drew you to the world of Virtual Production?

I’ve always had an interest in the technical side of the camera department, and I’d been following Matt Workman on his early explorations of the applications of a game engine. I had the opportunity to shoot behind-the-scenes content on one of the first Virtual Production shoots in the UK, and it was that which ultimately led to my job at Garden Studios.

Your role covers both the practical and logistical sides of Virtual Production – do you have a preference?

I greatly enjoy both sides of my role, and they feed into one another quite well. I try to do as much prep as possible before a shoot, and normally have several calls with the Director and Cinematographer to make sure we’re all approaching the shoot the same way – and more importantly, that their needs can be met in Virtual Production.

I also try to have a call with all the technical Heads of Departments (Gaffer, Focus Puller, etc.) to ensure we have everything we need for the shoot. I try to attend camera prep where I can so that I can pre-rig and calibrate the tracking system, as well as making sure I have alternative solutions for any specific rigs like Steadicam.

On top of this, you’re the Technical Director of production company Window Zebra. Are there any key lessons you wish you’d known before starting this project?

I underestimated how much the a company would impact my personal time. There were many months without a day off in the first couple of years to make things work around a full-time job, and then my BA at MetFilm School. This is much better now as we have built a great team around us, but ultimately the buck still stops with me and the other directors if ever anything goes wrong.

I cannot overstate the importance of having contracts in place with everyone involved on any level – they are easily overlooked when things are going well, but they are essential to protect you when things don’t.

Since we started working together more than four years ago, we’ve managed to grow our company into a highly competitive media agency with a great team of employees. We now work with global brands such as Google, Sky, and MTV on projects around the globe.

Can you share any standout memories from your time at MetFilm School?

I would say shooting The Time Between Us with Anna Boronea (BA Practical Filmmaking) in my second year. I fought off some MA Cinematography students for the Director of Photography role, which helped to boost my confidence as a cinematographer. This was also one of the first films I shot where we had a large kit budget, thanks to Anna winning a Procam Take2 competition, which really allowed me to select glass based on the needs of the story, without being limited by financial constraints.

As the film crosscuts between two time periods, both with different moods, I chose to use two very different lenses: Cooke S4 and Sony CineAlta Primes. They contrasted both in warmth and sharpness, which perfectly matched with the scenes.

Your next project, The Sikh Soldier, is set to use Virtual Production for some of its scenes – what have been the highlights of this so far?

The Sikh Soldier follows a soldier of the British Indian army from his home in Punjab through the horrors of the Great War and back to further horrors. Window Zebra is the production company ‘bringing the story to life’ with co-writers and directors Joseph Archer and Sky Cheema. We’re planning on using Virtual Production to shoot the India segments of the film, as well as creating some VFX set extensions of our trenches using Unreal.

It’s been great to follow the project from inception through to its current stage, working with historical and cultural advisors on the project to ensure accuracy throughout, and getting to feed this into the creation of the 3D scenes in Unreal. The project has been in the works for almost three years now (with delays due to Covid), and having that extra time for pre-production has really paid off. We’ve managed to previsusalise almost the entire film in Unreal, allowing us to edit before we start shooting.

Finally, if you could have been a part of any film, past or present, which would it be?

Working at Garden Studios has really highlighted my love of problem solving. Whilst any film set has a moderate number of problems to solve, I’d really like to work on a big boundary-pushing film (or series) using new technology, like Interstellar or The Mandalorian. This cutting-edge development is what really pushes me to excel.

I love having to figure out new ways of doing things and, especially when it comes to Virtual Production, doing things that nobody has done before.