What ‘Passing’ teaches us about playing a guarded character 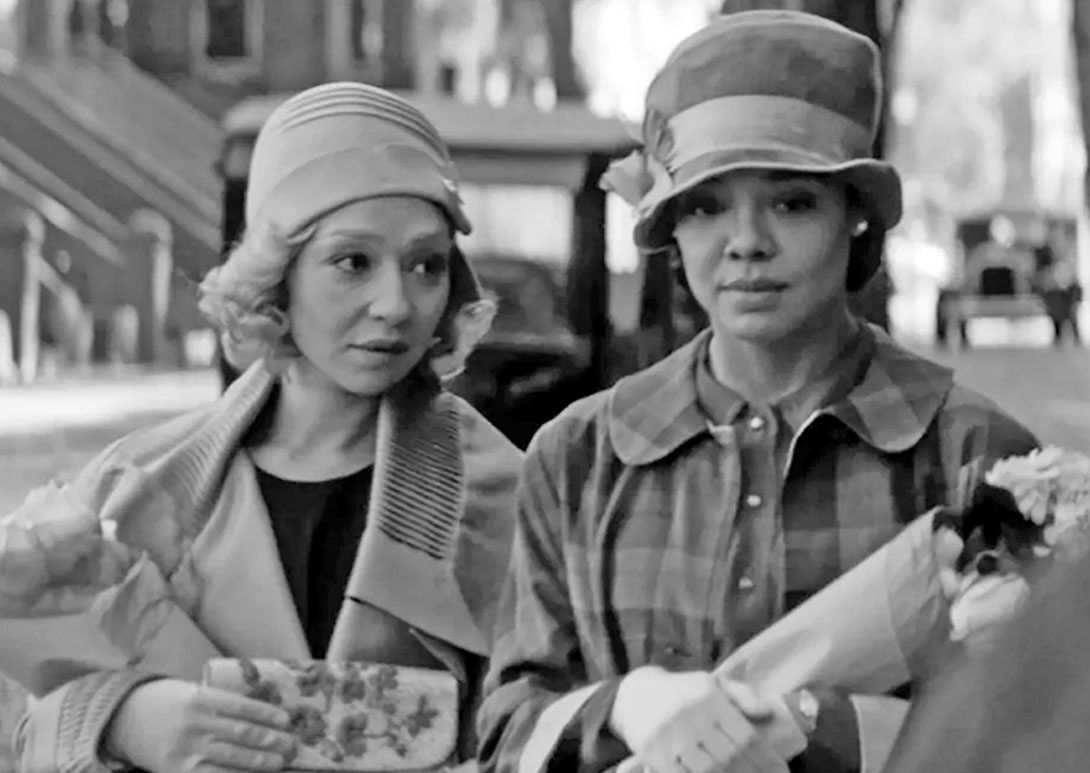 While there have been countless brilliant performances given across films released over the last year, one which really stood out was Tessa Thompson in Passing. The directorial debut of actor Rebecca Hall, the film has been nominated for four BAFTAs, including Leading Actress for Thompson, and Outstanding Debut by a British Writer, Director, or Producer for Hall.

Passing follows Thompson’s character, Irene, a Black woman in 1920s New York City, who ‘finds her world upended when her life becomes intertwined with a former childhood friend who is passing as white‘. What makes Thompson’s performance so interesting is that her character lives out much of the drama inside of her head. As an actor, you need to find a way to reflect these internal changes without overacting or externalising the thought process. Thompson achieves this.

In today’s article, with the help of MetFilm School Acting tutor Arkie Reece, we’re looking at what her performance can teach you about acting for film, and how MetFilm School’s Certificates and Part-Time Courses could help you to develop your skills.

Getting to know your character

Passing is based on Nella Larsen’s 1929 93-page novella of the same name, and the cast mention that they all read the original text alongside Hall’s adapted screenplay to really get to know their characters. Thompson adds that in doing this, she worried that the ‘“intense interiority” of the characters’ thoughts wouldn’t translate from page to screen.‘

‘There are depths of feeling that [Irene] doesn’t express,’ she added, ‘that she tries to repress very earnestly until they don’t have release. That was a really tricky thing to prepare for, because it meant that I needed to try and understand all these thoughts.’

It feels significant that Thompson, in an interview with IndieWire, compared the film to John Cassavetes A Woman Under the Influence, since this is another film which credits much of its success to a very psychological performance, this time by Gena Rowlands – who won Best Actress at the Golden Globes for this role.

Thompson also talks about how the lack of emotional release from her character left her constantly asking if she was doing enough. One tip she shared with Backstage was to transport herself into character through music, in particular Emahoy Tsegué-Maryam Guèbrou’s The Homeless Wanderer, which plays in the trailer and throughout the film as a musical motif.

From Hall’s perspective, she encouraged Thompson to map out her emotional journey to ‘try and hold the narrative‘ – and while she made the same ‘map’ for Ruth Negga’s character, Claire, she didn’t share this with the actor.

‘Claire is meant to be a free, uninhibited character,’ Hall explained. ‘I didn’t want Ruth to feel hemmed in by anything like that.’ Given the success of both performances in Passing, the lesson here is that sometimes, even the way that you choose to prepare for a role should be informed by the role itself.

This is something that Screen Acting tutor Arkie Reece reiterated when we spoke to him about the craft of acting. ‘There’s no such thing as character,’ he began, explaining that ‘top actors personalise their thoughts and feelings in performances, from personal experiences and imagination. Similar to how a pianist plays the keys of the piano for a particular song, the actor plays with their own range of emotional keys for a scene. We are the instrument.’

Directing as an actor

Another reason why we wanted to highlight Passing is that not only does it boast some amazing performances, but it was also directed by an actor, with Rebecca Hall having acted in films such as Vicky Cristina Barcelona, Christine, and the 5-part miniseries Parade’s End.

In our Certificate in Acting for Film, we spend time thinking about how you might begin to work with your director, especially in terms of understanding their perspective of your character, and Hall’s experience appears to have brought a new element to this process. One example of this is in the interiority of Thompson’s character.

Throughout the film, there are moments where the camera lingers on Irene – such as one scene where we watch her through the reflection of a mirror. These choices allow us to get a glimpse of Irene’s frame of mind, but are also heightened by the 4:3 aspect ratio, which Hall used to show how trapped the characters feel. ‘It’s so intangible, this sort of acting that Tessa does in the movie, [because] you don’t have any emotional catharsis ever.‘

Why Acting for Film?

Watching and reading the interviews that Tessa Thompson and her castmates have given, it seems that the shooting process of Passing was one that they all treasure, especially because of the freedom that they were given to get to know their characters. Both our Certificate in Acting for Film and our Part-Time Acting for Film Course help you to achieve this same sense of control over each role that you embark on, because they clarify the entire process.

With lessons on how to determine whether a script is the right fit for you, to how to approach the audition process, all the way to different acting methods to help you discover your character, our Certificate in Acting for Film helps prepare you for your next role. Former Acting for Film Levels 1&2 student, Erica Nlewedim, left MetFilm School with certainty that she was ‘a better actor because of [her] experience’:

‘Rather than just acting the emotions, it’s helped me to understand the character, consider the character’s mindset, feel their emotions, and draw on those for a more authentic performance.’

Tutor Arkie Reece summed up the importance of learning the craft of acting as learning to be a part of the creative process. ‘Sometimes, actors forget that part of the reason we bring value to a set is because we’re part of the problem solving team. Even if none of our suggestions are used [on the day], we still turn up tomorrow with more ideas and suggestions to help elevate our story.’

Watch the trailer for Passing, available to watch on Netflix now.