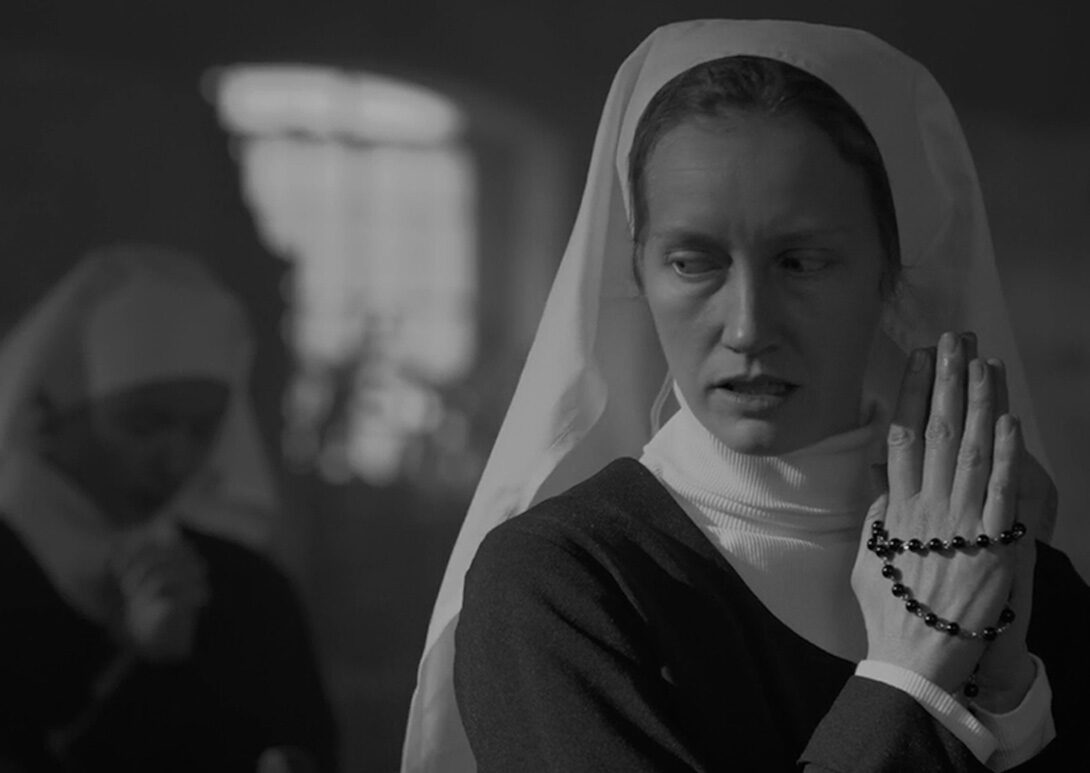 There are plenty of horror films set in convents, but none of them are quite like Itch, the debut film and graduation project from MA Directing graduate Susannah Farrugia, and produced by Catherine Colbourne (MA Producing).

The film has had an extremely positive response from the festival circuit. So far it has picked up laurels at Underwire Festival 2022, Cambridge Film Festival, Arrow Video FrightFest 2021 and the Final Girls Berlin Film Festival – amongst many others.

When we asked Catherine to summarise Itch, she described it as ‘a nunsploitation body horror that explores the dangers of repressing unholy desires’, adding that she ‘saw Susannah’s pitch and was immediately on board’.

Susannah’s debut film follows Sister Jude, who develops an insatiable itch which coincides with her growing feelings for another nun. ‘I live with severe lifelong eczema’, explained Susannah, ‘in the most literal sense, I’ve never felt comfortable in my own skin. This film was an attempt to sublimate my horrific experience into a horror’.

Itch is shot in black and white, with a 4:3 aspect ratio, much like another film we recently wrote about, Rebecca Hall’s Passing. In both films, the directors spoke about how these choices were made to enhance the atmosphere and emotions of the characters on screen.

‘I had the film’s aesthetic in mind from its conception,’ said Susannah. ‘While I understand the choice of it may alert the audiences to the presence of the filmmaking and perhaps bring them out of the narrative, I see it to be the only way to show it. I have my own reading, that it parallels Jude’s black and white thinking. I also chose the 4:3 aspect ratio to enhance the sense of ‘cloisterphobia’ (fear of church or priests).

While watching the film, we were reminded of many other female-led horrors, from Rose Glass’s Saint Maud to Julia Ducournau’s earlier short, Junior. The latter, which follows a young girl as she enters puberty, uses body horror to show her ‘metamorphosis’. We mentioned this to Susannah, and asked her why she thinks horror is so often used as a vehicle for female experiences.

‘I believe that there are certain anxieties and horrors relating to our body that only women can experience, so perhaps that’s a reason why female-led horror can be so personal and pointed. I am also very keen to represent women and the ‘monster’ in this genre, but the book The Monstrous Feminine by Barbara Creed explains it better than I ever could.’

Watch Junior, a short film by Julia Ducournau – director of Raw and Titane – on YouTube

‘I was the sole producer on this project – as well as taking on a bunch of other roles, as is the way with student filmmaking’, Catherine told us when we asked about the production of Itch.

Due to Covid, as well as other unavoidable reasons, the team didn’t have an editor, which means they took on the role themselves. ‘We just persisted with it until it worked. We took advice from our tutors and kept cutting away,’ said Catherine. Despite any difficulty they initially faced with the editing, the result is seamless, especially because of how it flows together with the sound design of the short. Here’s what Catherine had to say about this:

‘My brother was sound designer and recordist, and he did some particularly great work with the foley – the more gruesome sound effects were created by attaching a pork chop to a music stand and attacking it with a knife, a real-life Berberian Sound Studio! There was a lot of experimentation which, in the end, turned out really well!’

‘[MA Directing Course Leader] Simon Shore is a great tutor who gave me consistently solid feedback and constructive criticism, which helped me to prepare for Itch‘, Susannah said of her time at MetFilm School for her MA Directing course. She also shared her standout memory from the course: ‘meeting Catherine and [their] script editor.’

Catherine joined an upcoming MetFilm Production project as a Director’s Assistant after graduating from MA Producing at MetFilm School London. As the producer for Itch, we were eager to learn more about the skills she carried across to this position. ‘The most useful concept that I hung onto,’ she explained, ‘was that the film would continue to evolve at each stage of the process. It’s important to trust your instincts, rather than cling to things that are not working’.

Finally, we asked both filmmakers for their top advice:

Catherine: ‘Don’t set your queer horror film in a convent unless you are prepared to be rejected by every single church in London, and always get the crew a big box of doughnuts!’

Catch Itch at the MOTH Club in East London on Sunday 27 March as part of the Deeper Into Movies Shortcuts Film Showcase.

Watch the trailer for Itch here!