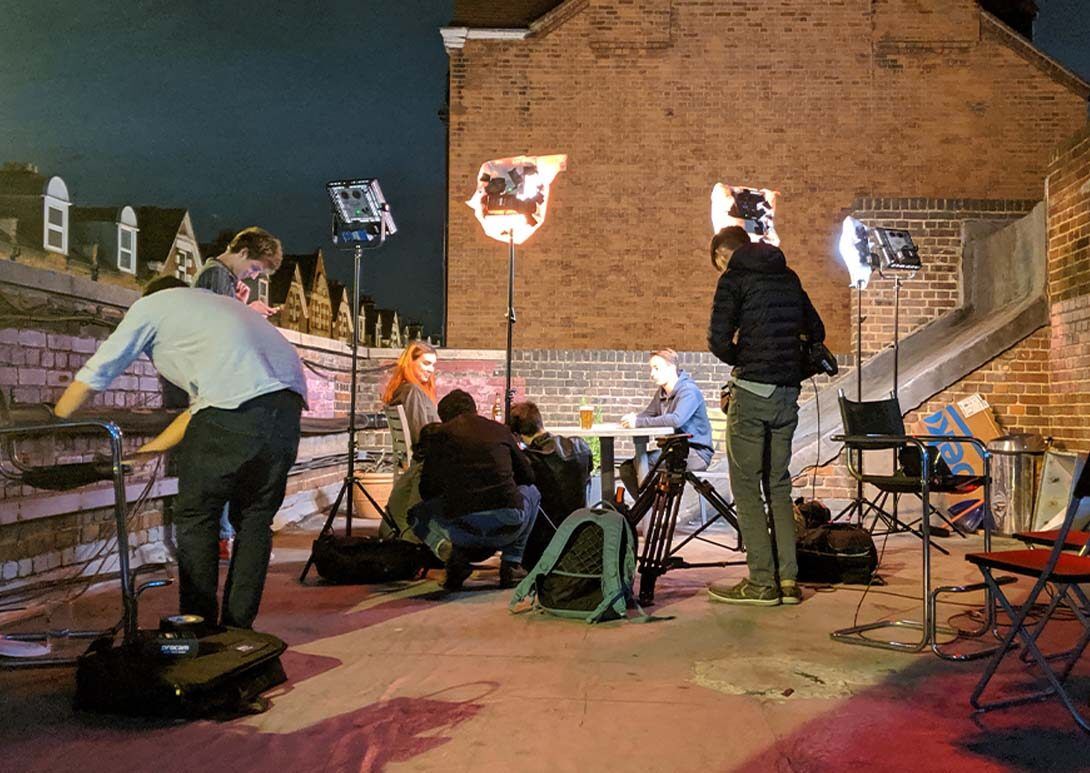 We’ve caught up with two current students enrolled on our MA Film and Television Production course who told us why they choose this course, and how it’s helping them work toward their future goals by building on their existing skills.

Stefano Moscone is a cinematographer by craft. His short fan videos about the world-class footballer Cristiano Ronaldo have racked up of thousands of views online combined and became a ‘cultural phenomenon’ for the YouTube football community.

The success of his channel got Stefano thinking he could create a feature-length documentary about his hero. He tells us about how this dream leads to him enrolling on MA Film & Television Production, as a way of enhancing a multitude of filmmaking skills.

How did you get into filmmaking?

When I was a child I used to watch a lot of old fashioned Italian comedies and Spaghetti Westerns with my father. I was hooked on them, and even now they influence my work. I started making comedy shorts when I was 12 and then started video editing with my sister. Since then I’ve never stopped. I can happily say that my life is completely based on films and videos.

How did you discover the MA Film and Television Production course?

MetFilm School was suggested to me by my former tutor at Accademia Albertina of Fine Arts in Turin. I also know a number of former students and they’ve all said good things about the School and its courses.

At the beginning, I was more interested in the MA Directing course, but then this new one popped up and caught my attention. The idea of being knowledgeable about all aspects of filmmaking, not just directing, was exactly what I needed. Moreover, being one of the pioneers of a new course is exciting!

You’re halfway through the course, what have you enjoyed the most so far?

My favourite module was ‘New Age Television’ run by Fran Poletti, where we created a web-series called ‘But Wait There’s More!’. I acted as the screenwriter on one of the episodes and really enjoyed how Fran ran it.

There’s such a friendly atmosphere at the School and Ealing Studios; everyone is very kind and helpful. Even though I’m far away from home, when I’m at school, I almost forget it.

What do you plan on doing after graduation?

My dream is to split my time between Italy and London working as a freelance director and writer. I’m currently writing my first feature film and I’m looking forward to making it next summer, right after I finish the MA.

Photographer and filmmaker Mickey Lai had a successful career back in her home country of Malaysia, with numerous nominations and awards to her name.

However, like any developing creative, she needed a new challenge and embarked on the MA Film & Television Production course as a way to learn new skills and explore her love of the UK film industry.

You already had a growing career in film and photography, what bought you to us?

Before starting my MA, I was working in many roles across reality TV, commercials, fashion film and photography, and music videos.

About a year ago I was feeling the need to push myself out of my comfort zone. I dreamt of seeing my work on the big screen, but equally on the small screen and online. We live in the ‘Netflix generation’, and the MA Film & TV Production looked like it would provide me with a platform to study and understand the workflow of making content for streaming.

Photography is actually more of a hobby, but I find it greatly improves my sense of aesthetics. Back in Malaysia, one of my film tutors told me films are actually made up of thousand frames and images.

What is it like studying in London after being in Malaysia?

Like London, Malaysia is a very multicultural place and I’ve always been curious about the idea of cross-cultures and self-identity within film. I’ve always liked how the UK has made films. I chose this course to help me learn the art of storytelling as well as explore the UK film industry.

I’ve found a lovely bunch of mates to work with! Being at MetFilm School, you work and collaborate with people from all around the world. As well as working together at the School, we also create personal projects together during our spare time. It’s always great to see everyone improving together!

Tell us about some of your favourite experiences so far?

I’ve learnt so much about screenwriting, which I had never done previously. I feel I’ve found my voice as a storyteller. I’ve developed a real interest in scriptwriting and I can’t believe that I now practice writing new ideas down as part of my daily routine.

‘Dramatising the Now’ module was incredible! I learnt to observe things and people around me and see how every one of them could be adapted into an interesting story. During this module, I worked as the director of our short film ‘Ryan’ based on a true story about my friend back home. Personally, I’ve found directing a film is much more challenging compared to a music video, so I’m glad I’ve had the opportunity to learn numerous film directing techniques, too.

How have you found the quality of the teaching? What tutors have stood out to you?

The structure of the course had allowed us to explore the industry from so many perspectives, from pre-production to post-production. By carrying a variety of roles in different modules respectively, we now understand the responsibilities across the filmmaking process.

The tutors have been so inspirational, especially Justin Trefgarne, our course leader. He’s equipped us with skills which enable us to think for ourselves rather than telling us what to think or what kind of stories should we tell. We learn by doing and making mistakes in a safe space to share and explore our ideas.

Over the course of one year you get to do it all; write, produce, edit, shoot, pitch and attend film festivals. Apply to MA Film and Television Production for March 2020 today.