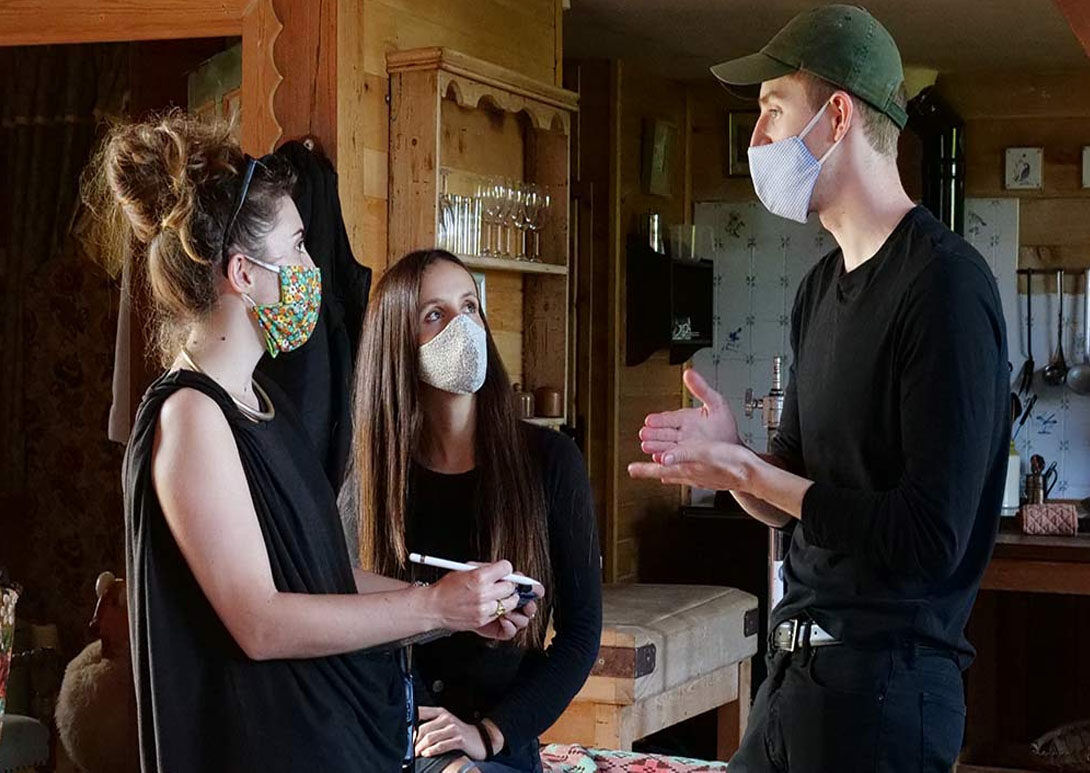 Sometimes it’s tricky to discuss your work without giving too much away. Such is the case for MA Directing alumni Max Ward, whose newly released short, Return of the Beast from Outer Space, centers on a delectable twist…

What can be said though is that the film looks to be a riot. A thrilling love letter to classic low-budget horror; a genre perfectly suited to ambitious filmmakers looking to flex creative muscles. Numerous MetFilm School graduates are credited on the production, including Carlotta Beck Peccoz (1st AD, MA Directing) and Carmen Fortea (DoP, MA Cinematography), pictured alongside Max above.

Return of the Beast from Outer Space officially started its festival run last month, premiering at the Interrobang Film Festival in Des Moines, Iowa, US. A fitting start for the film, with Max having grown up in the area. More festival screenings are expected this year before a public release – read more here.

Firstly, what inspired you to make a monster movie?

The inspiration for the film came from an idea I got while I was a crew member on a different horror film set. However, if I say the idea it will spoil the twist in the film! Which interestingly enough, actually shows how the script was written. I started with the idea for the twist and worked backward from there.

The film’s title and poster feel inspired by the schlocky B-movie horrors. What sort of influences fed into the project?

Yes, we took a lot of inspiration from the monster movies of the 50s and 60s. Our title design, score, and costume are all inspired by this genre of cinema. In particular, we borrowed a lot from The Creature from the Black Lagoon. It was fun to work on a 50s B-movie-inspired project because that genre of filmmaking has a lot of clichés that we were able to mix into our modern take. It was also a large part of our film’s story and a big influence on one of the characters.

When did filming take place and how did you go about finding the right location?

We shot the film in September 2020, during a brief relaxation in covid restrictions. It was quite difficult to find the right location since we wanted an American-style cabin in the woods. We ended up filming in Shropshire, on the border of Wales. The natural beauty of the area and its feeling of isolation made it perfect for our film.

Is there a particular aspect of the film that you’re most proud of and what challenges did you encounter?

One of the difficult parts of the film was trying to tell the story visually instead of through dialogue. We took this approach so that the audience could solve the mystery themselves by putting together the clues we placed in the film. We didn’t want to the viewers to be spoon-fed the answers. This made it important to show several key details in a certain order to reveal the twist in the most interesting way.

My favourite part of the film is how it continues to mess with the audience’s expectations. We wanted to take a classic genre and turn it upside-down. It’s unpredictable and the twists in the film keep everyone on their toes.

There are quite a few MetFilm School graduates credited on the film – how useful has film school been in building a network of collaborators?

We had several students from MetFilm School, from multiple courses, on the project. Film school was integral in giving us a starting network of collaborators to start our careers in the industry. We found other like-minded filmmakers at the School and stayed connected as we started working.

Looking back on your own creative journey, did you always know you wanted to direct, or did you settle on the role over time?

I had already committed myself to film early in high school but wasn’t always sure if I wanted to be a director. I also love VFX and writing. When I applied to MetFilm School, I had to pick a path. After thinking about it I came to the conclusion that I wouldn’t be happy working only as a writer or as a VFX artist, but I would be happy as just a director. And plus I often get to write for my projects anyways!

You’ve also made music videos and various promo content over recent years – how would you describe your approach to picking projects and what do you most enjoy making?

I usually like projects that have comedy elements to them. Most of my own scripts have all been comedies. Return of the Beast from Outer Space was something very new for me since there’s not a single humorous moment in the film. That made the project especially interesting since it was a different genre than what I’m used to.

What tips would you give to other aspiring filmmakers making their first short films?

A word of advice that I would give to younger filmmakers is to simply get involved in as many projects as possible and to make your own stuff as well. I think it’s important to continue to make stuff and work on your craft even if you’re not feeling creative and inspired. The more you make, the better you’ll get, and the more people you’ll meet.

Explore more of his work at maxwardfilm.com

Watch the trailer for Return Of the beast from Outer Space