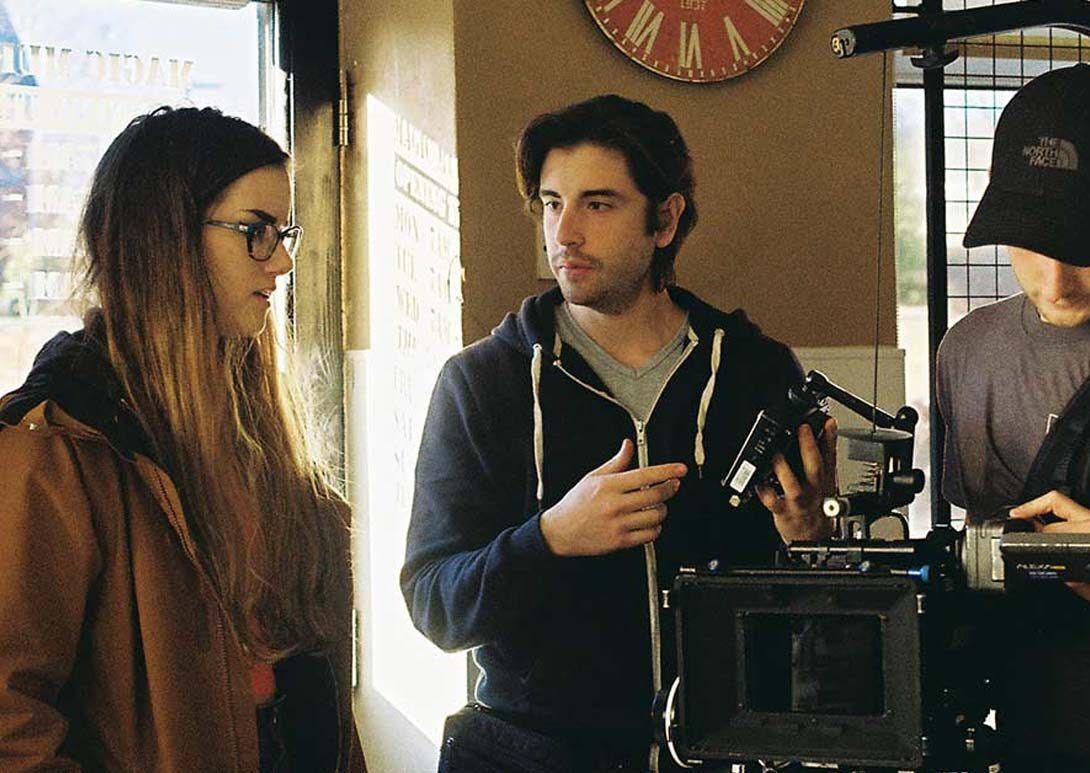 Emily is one of a handful of students to experience both our campuses. She completed her BA Practical Filmmaking in London in 2018 and is currently studying our MA Directing in Berlin.

Her BA graduation film, BEE, featured at Berlin’s Grrl Haus Festival – an event showcasing the work of local filmmakers. It was the first screening of the short outside of the UK, and the first since one of the film’s stars, James Nelson-Joyce, rose to further recognition following his performance in BBC’s hit drama Time, alongside Sean Bean and Stephen Graham.

In this interview, we speak with Emily about studying in Berlin, working with actors, and the benefits of going to film school…

What motivated you to study MA Directing in Berlin?

After I graduated with my BA Practical Filmmaking at MetFilm School London, I worked for two years in the industry as a runner. It was fun work but very energy-consuming. I found it difficult to find time to develop my skills as a director and to continue to make my own films. Once the pandemic hit and the industry ground to halt, I found myself at a crossroads. I decided to take a leap and spend a year fully focusing on my craft by doing a Master’s degree. Berlin is a city I have always loved and a place I wanted to live. So it made sense to join the two dreams together. I also wish to continue building my life in Berlin beyond my studies.

How would you compare life in the UK and Berlin?

Berlin is a mix of many different types of people living in the same place, but It feels less divided here. People can get by with a lot less money than London so it encourages people to do and be whatever they want. There seems to be a subculture for everything which makes it interesting and inspires lots of ideas for films! There is always something going on; so many events, it is impossible to keep up. I love Manchester and sometimes Berlin reminds me of it but I don’t think I will be going back in a hurry. Life here is exciting, but at the same time, Berlin allows you to live at your own pace.

How does it feel looking back on your BA graduation film BEE?

It was very interesting to witness an audience watching it, a couple of years after the last time I saw that. I am still very proud of what I accomplished and I see that people are still emotionally moved by it. I was very ambitious at the time and I have taken a much more modest approach to my MA graduation film. Maybe I tried to say too many things at once. But then again, I hear feedback from people who have viewed it more than once and they always notice something else.

The film is led by two great performances from Shazia Bibi and James Nelson-Joyce – what do you feel is the key to good casting for a short?

Casting is super important. Definitely go with your gut. There is a point during a reading or improvisation where something clicks and I think‚ “yes, this is the right person for the part”. It’s a great feeling to have. When I don’t have this feeling or cast someone without it, they never end up being right. So I should keep looking until I find this feeling.

Shazia and James were quite different. Shazia didn’t have much experience whereas James had experience and his career was starting to rocket. So I had to take very unique approaches to working with each of them. However, for a short, it is best to always cast someone who is right for the part, regardless of whether they are famous or not.

What tips would you give to a first-time director working with actors for the first time?

Take a deep breath. Embrace the fear. Gather your thoughts before giving direction. Trust yourself and be confident. The actor won’t perform if they don’t believe you know what you want. Trust the process and be open to the film evolving. Make sure to spend time talking with the actors one-on-one. Don’t focus too much on the camera; make sure to find a DOP you can trust and who thinks on the same page as you so that you can focus on the actors.

Your most recent short, Little Lamb, screens in Berlin this month – what can you tell us about the film?

Little Lamb is a story about a woman who finds an abandoned baby. It is also a story about grief. The film is only a few minutes long, has no dialogue, and is about the internal struggles of the main character, Mary, and how she then finds hope in this baby. We filmed in March 2020, just as everything hit! I was happy that I was able to make something before lockdown. I think I would have struggled more so otherwise. The idea was to shoot the first scene and then use it to get funding for the rest of the film. But I think the film stands up in its own right. So I think it should be seen. The longer project is still on hold and we haven’t managed to secure funding yet, so who knows.

Over recent years you’ve also created numerous music videos – what do you find appealing about the art form? Do you feel it informs your narrative work?

I am actually in the process of forming a company with fellow student Ksenia Bilyk as a directing duo called anti klip to make music videos here in Berlin and elsewhere. I really enjoy music videos as it is often a short process of coming up with an idea and shooting it. It’s often an opportunity to try out crazy ideas that may not otherwise make sense in a script. So I think it helps me develop my visual storytelling skills and pushes me to be creative within a brief. Our most recent project is an exciting project for a major label coming soon…

Lastly, what have been the benefits of learning your craft through film school?

It’s a cliche but the people you meet are the best thing about film school. There is no other place where you can find people who you can work really well with. Film school really allows you to focus on your skills. It’s hard to do that when balancing jobs or home life. Yes, you can learn by trying yourself or by watching YouTube videos and reading books. But when you have a tutor guiding you and asking you questions about your ideas and pushing you into a better direction, then your development is much more focused and you will improve faster than if you tried to do this alone. Also watching how your peers learn is very helpful and you learn to view your work more critically.