How to light skin tones with cinematographer Tunji Akinsehinwa 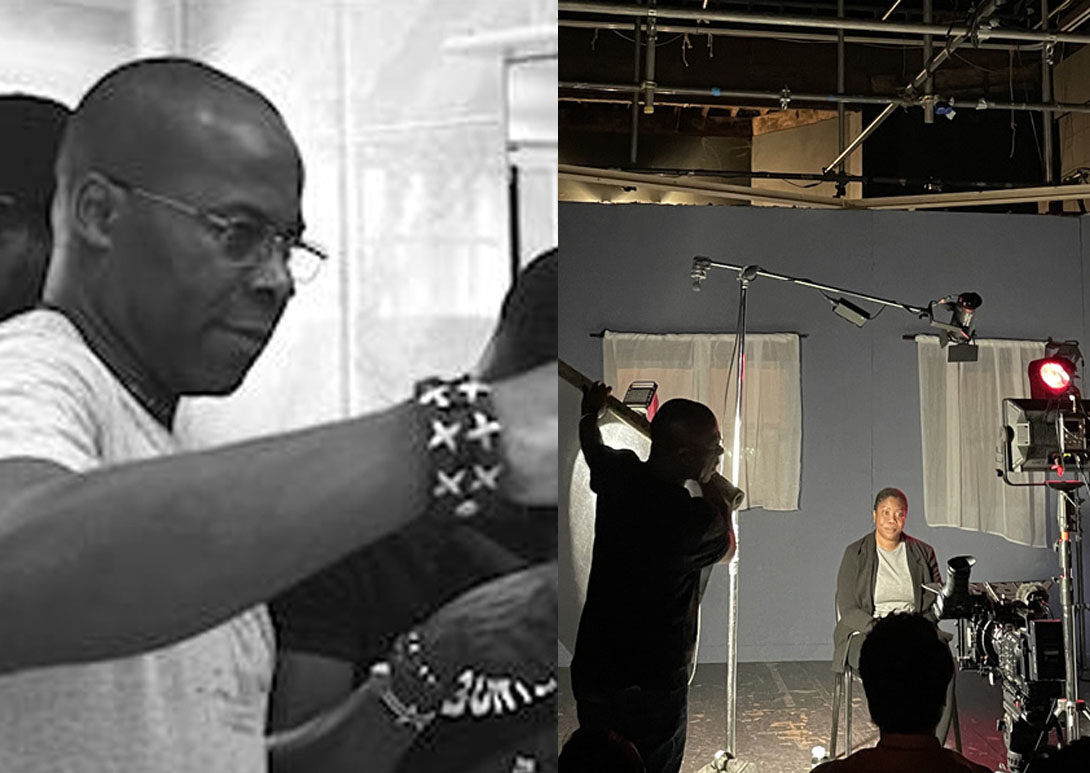 At a recent MetFilm School workshop, students across BA and MA courses learnt techniques for lighting varied skin tones on camera, an essential skill for any cinematographer and filmmaker to have an awareness of.

The workshop was led by cinematographer and tutor Tunji Akinsehinwa, the third time that he has taught the session at the School. Speaking to Tunji about his inspiration behind the workshop, he mentioned returning to the North of England after spending a couple of years in Nigeria – ‘I realised that no one was really talking about the importance of this,’ he explained, ‘whereas back in Nigeria, it was just the standard’.

In this blog, we’re sharing our top takeaways from the workshop, from Tunji’s opening presentation dispelling ‘cinematography myths’, to practical techniques you can implement into your next project, and a list of inspirational filmmakers you can learn from at your next movie night…

Tunji started his workshop by making clear to students that lighting dark skin tones does not mean turning every possible light in their direction. In fact, doing so simply reveals that you don’t know what you’re doing. He continued by explaining that students shouldn’t be afraid to ‘take advantage of dark skin tones’, which absorb more light, and often grant the cinematographer opportunity to play with contrast and shadow as a means of storytelling.

To prove this point, Tunji referenced the way that cinematographer Bradford Young shot Danai Gurira in the 2013 Nigerian film Mother of George. Danai, in the role of Adenike, is faced with a moment of intense inner turmoil when facing a marriage she does not desire, and as she waits for the ceremony to begin, Young manipulates the lighting to place half of her face in shadow, a visual representation of how she is feeling in the scene.

After exploring some of the key scales and systems used to measure how light and colour interact with one another – from the Fitzpatrick Scale to the Ansel Adams System, Tunji prepared to share practical lighting techniques with the class. Before this, however, he summed up the entire process with one simple trick:

‘When you’re lighting multiple skin tones, use soft lighting, and place the actor with the darkest skin tone closest to your light source. The best option is usually to light each actor with their own individual light source, but when that’s not an option, this is the next best thing.’

A polariser is a filter placed in front of a camera lens to help reduce or remove reflections and glare from your shot. It is also a helpful tool in shooting darker skin tones. ‘I don’t know why this is the case,’ Tunji added, ‘but it is’. In fact, Ava Berkofsky is known to use a polariser in much of their work for HBO’s Insecure, which has seen them nominated for cinematography awards from both the Emmy’s and the American Society of Cinematographers.

One of the best things about using a polariser is that it is a simple yet effective technique to add to your repertoire. It helps to exaggerate natural highlights in skin tones, giving a ‘deeper’ tone, all the while helping to reduce reflections in the final shot.

A top tip for using this filter: it tends to work better in natural light, or scenes shot outside.

Introducing the next technique, Tunji brought up a collection of shots from Michaela Coel’s I May Destroy You, where club scenes are bathed in neon reds and greens. Adding colour to your shots, especially in darker, indoor settings, can not only help to highlight a range of skin tones on set, but it also brings a new element of storytelling to your scenes.

Alongside colour lenses or filters, you can also experiment with reflector paper, which is held up alongside the camera to ‘bounce’ light onto your cast. Tunji demonstrates the effect that this can have by using a gold reflector, which is best for dark skin tones (while a silver or peach alternative is better for light tones).

One final technique that Tunji explored during his workshop is one which works not just for lighting diverse skin tones, but more generally for creating a flattering silhouette of your cast: the butterfly technique. This technique works by placing your lights above and behind the actor, creating a ‘butterfly-shaped’ shadow under their nose, and is nothing new to the world of film and photography – in fact, 1920-30s film star Greta Garbo was known for constantly using this technique in promotional stills and magazine shoots.

The reason that this technique works so well when shooting varied skin tones is that it allows the lighting to interact with and respond to each actor’s individual face. Shadows and highlights are easier to control, and with an additional light behind them, you can quickly resolve any issues of characters ‘fading into the background’.

Cinematographers to learn from:

All of the practical techniques that Tunji showed our students have been used in film for decades – the difference here is that they are being used in consideration of the different needs that skin tones have. To help students see and understand the huge difference that ‘good’ lighting and cinematography can have, Tunji shared some recommendations.

James Laxton speaks about his work on Barry Jenkins’s Moonlight