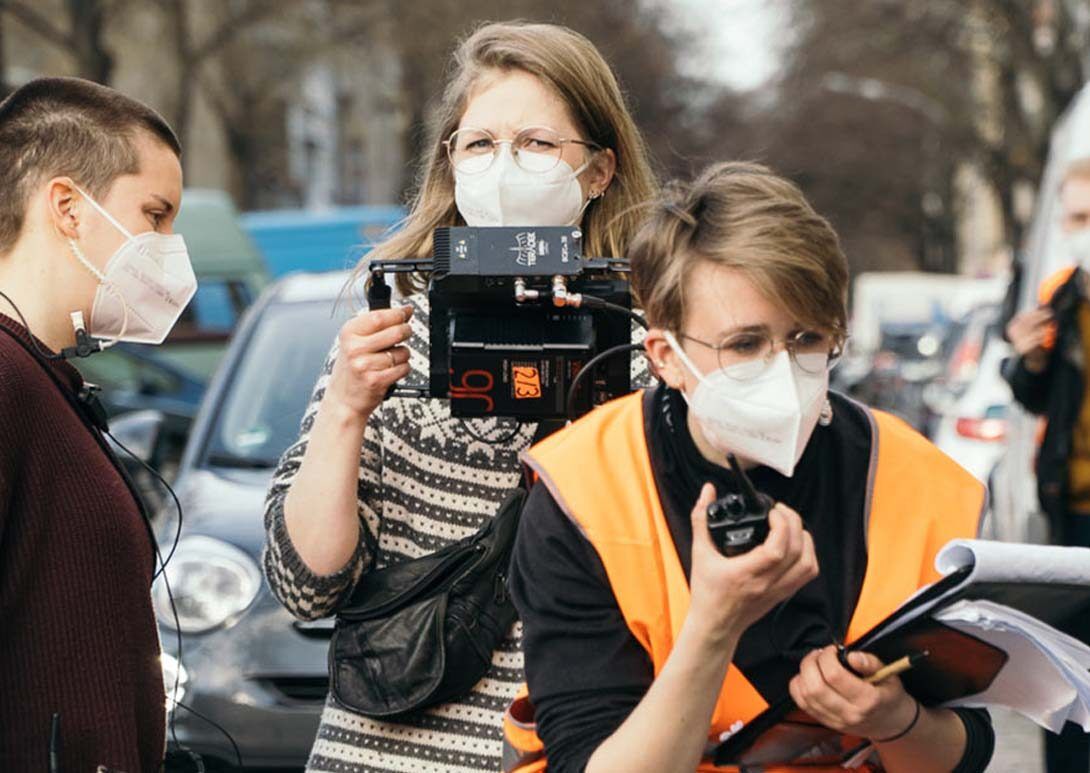 From music to literature to film, there is a long-standing tradition of great art and creativity being born out of challenging times.  For GENERATION TOCHTER – a freelance independent film collective based in Berlin – the struggle hasn’t just been working through a global pandemic, but a desire to improve accessibility and rethink the hierarchical structures holding back both women and young filmmakers in the film industry.

GENERATION TOCHTER is not just the name of the collective. It’s also the working title of their first feature film; an action thriller now approaching its final stage of shooting. Directed by Norweigan filmmaker and former MetFilm School Berlin short course student, Marielle Samstad, the film’s crew has prioritised forming a diverse team in which management positions are predominantly filled by women. Needless to say, we are very excited to see it.

In this blog, Marielle tells us about the impetus behind the film and what she hopes audiences take away from the project…

What motivated the launch of GENERATION TOCHTER?

The project and collective started with the idea of making an action film with women in the leading roles. In Germany – amongst other countries – there is a lack of films that show action, violence and danger from female perspectives, so there was a decision to explore and do something about that. We also want to see a change in the industry, making sure representation is valued and apparent in films.

The idea of forming a collective came from the need to explore other ways of producing films. In an industry where leadership positions are often held by men, we wanted to establish a diverse team and place women both in front and behind the camera. We want to challenge the traditional structure of hierarchy in film productions to open up for new perspectives. Therefore we have many teams or departments that can collaborate interconnectedly and we keep everyone up to date through monthly meetings. We also organise events that focus on women in film. The next one is a short film festival taking place on 22 May. More info can be found on our social media channels.

How has the team grown and what kind of backgrounds do members come from?

The collective was founded by a small group in late 2019 and since then it has grown to almost 100 members. I joined in Spring 2020 and find it amazing to see how many people want to be part of the project and the change we are trying to make. We are all participating on a voluntary basis and there are people from all kinds of backgrounds. Many being students, some already working as professionals, and some who don’t necessarily have a connection to film at all. Almost everybody has other jobs, projects or studies in addition. There are many nationalities represented, which means we are mostly working bilingually. Almost everyone is based in Berlin, but due to the pandemic and remote workflows, we have people sitting in other cities and countries.

How would you describe the film and your role on the production?

The film is a coming-of-age story told from the perspective of a young woman eagerly seeking emancipation. Using a style that incorporates elements of realism and action, we try to create a film that we ourselves would like to see in the cinema. A captivating story about women told by women. Both the film and collective represents change and independence, which is why I am very proud to be part of this project as director.

Working as a director on a project like this is both challenging and rewarding. Structuring workflows and working with a flat hierarchy demands clear communication – which is difficult sometimes. But on the other hand, the people are incredibly dedicated which generates a good energy which is very enriching.

What impact has the pandemic had on your ability to collaborate?

The pandemic has obviously been another challenge for all production stages and has forced us to think differently. Like many others, we’ve been depending on Skype, Slack and other platforms to communicate and work creatively together. In the production stage, a big challenge has been safety on set. It took us a lot of time to work out a solid hygiene concept to stay safe while shooting. This also demanded a part of our budget, which is challenging for an independent production. But throughout the difficult times, we’ve stayed determined to keep working. Considering the fact that we have been stuck at home most of the year, I am very thankful to have had this project on my hands. Without it, I’m not sure what I would have been doing.

How have you managed to fund the feature so far?

At this point, we have completed two out of three shooting blocks, which means we have also been able to secure funding twice. But barely. For both blocks, we ran crowdfunding campaigns which were indeed successful, but even with the money we secured, we were balancing on a thin line. Especially for the second block, which was the biggest due to the demanding scenes. Action scenes and stunts are a risk and therefore we need to work safely, which requires money. Right before our second block in March it was still uncertain whether we could shoot or not. The combination of the financial insecurities and not knowing if the COVID-regulations would stop us from continuing was quite turbulent. But what I have learned from it is that if you put all your heart and energy into something, you find a way.

We have been very lucky to gain support from companies, individuals and local establishments that have made it possible for us to go through with our shoots. Without all our supporters nothing of this would have been possible. But seeing how many people are willing to help us out is extremely encouraging. We are now preparing for our third and final shooting block and have made the decision to run a third crowdfunding campaign. It’s important to us that the quality stays the same and that we can see it through to the end. The campaign starts next Monday 17 May and we hope we can gain more supporters and followers to partake in this journey with us.

Stunt and action scenes are rarer in low-budget productions – how have you prepared for these?

We had a lot of help from a stunt professional, Tanja De Wendt. As a stunt coordinator and stunt woman who has worked for many years in the German film industry, she guided us through the whole process. To have her in our collective and to be able to collaborate with her is a great experience. In addition, we were lucky to have Mario Eichendorf and Ulrike Lehmann who supported us in SFX and stunts. Precision stunt driving, robberies, firing weapons and bloody special effects are all things that are part of the film, and having these people on board definitely helped raise the quality of the scenes. Look out for our upcoming crowdfunding video which will include some exciting footage!

What do you hope viewers take from the film?

I hope it will encourage discussions around the representation of women in film and how important different perspectives are. I also find it important to show what a group of young filmmakers can do – to make a feature-length film on a no-budget level. It is difficult to gain access to funding. But not having a track record should not define the value of a project. It is very difficult for younger filmmakers to get a foot inside, and because of that, we lose a variety of perspectives and diversity on screen. New and diverse voices are extremely important in a medium like film – in a way, it forms the society we live in.

GENERATION TOCHTER is a great showcase for Berlin – what does the city mean to you?

Berlin as a creative space is incredible. Being a creative in this city means you are never bored. It can definitely be overwhelming at times, due to its many possibilities, but when you find the right projects you feel like a child in a playground. As a multicultural city, Berlin is quite tolerant and diverse, which for me is important. To be able to always meet new people and learn new things all in one city is quite remarkable. And it never stops. It’s a space where great things like GENERATION TOCHTER can form.

Support GENERATION TOCHTER via their Start Next crowdfunder and official website.

Go behind the scenes of GENERATION TOCHTER