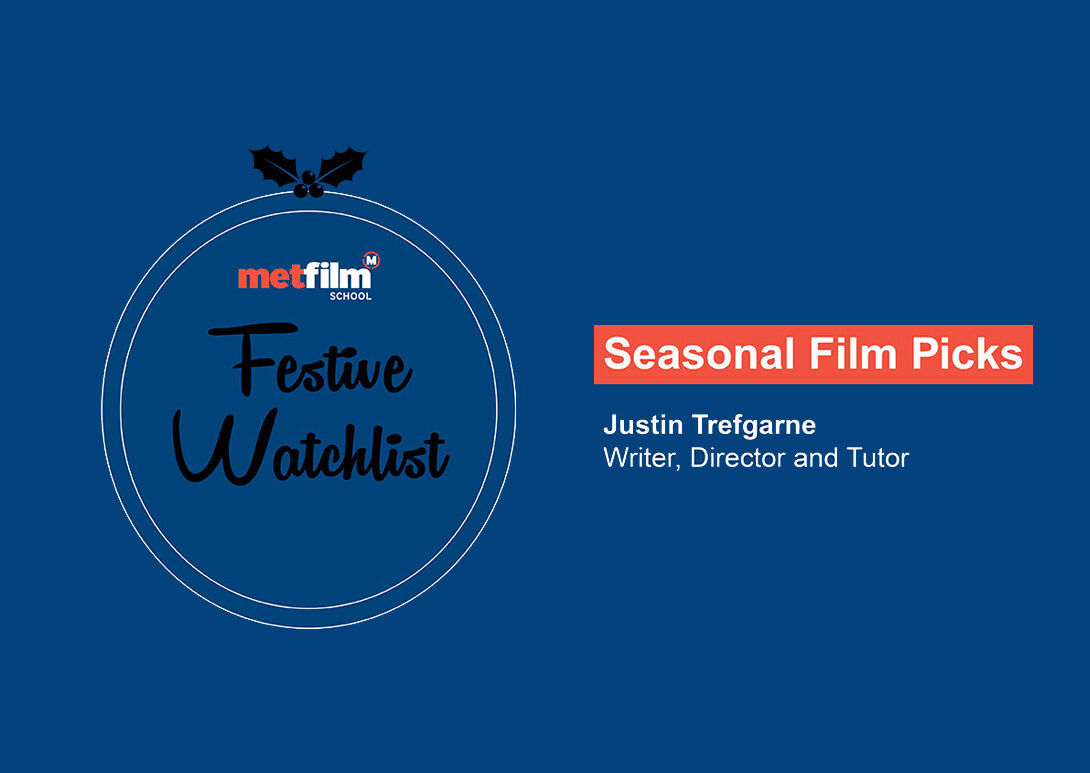 With many of us spending more time at home this Christmas, there has never been a better time to grab a blanket and settle down with a classic, feel-good film. To help inspire your viewing schedule, MA Film & Television Production and BA Screen Acting Course Leader, Justin Trefgarne, has kindly picked out this festive watchlist of ten seasonal classics!

Earlier this week, we also shared Justin’s top British film picks which you can read here. Over to you Justin…

For me, a Christmas movie is something more than a story that directly addresses the more obvious trappings of the holiday season. I guess all of our ideas of appropriate Christmas viewing are shaped by our formative years, but for me, the core criteria are, perhaps, the looser ideas of winter weather – preferably thick snow; spectacle and length – this is the time for big stories; family – in any configuration; and adventure – by which I mean trying something old, even obscure.

I’ve been a bit loose with the ‘Christmas’ part but every one of these is a film you could curl up with during the holiday, and again I’ve tried to include as much snow/Winter as possible…

Obvious, I know, but it is simply one of the best films Hollywood has ever produced. And that’s perhaps because it’s also incredibly complex and rich in themes, indelibly shaped by director Frank Capra’s harrowing experiences in WW2. It’s a family film wrapped around a suicide narrative that looks at the individual in society, and the society in the individual with honesty, courage and pure heart. It’s amazing to think this was a flop when released. If you ever needed reminding of why cinema is the most powerful popular art form ever, this is the film for you.

Technically a remake but still a film that is overflowing with wit, romance and charm. This was one of the high water marks of the second great wave of Romantic Comedies that featured one of Hollywood’s all-time great pairings, Meg Ryan and Tom Hanks, guided with sheer brilliance by the inimitable writer-director Nora Ephron. And, like all great movies, there’s some big stuff going on under the surface, about loss and greed and all kinds of things that are as relevant today as then. And also worth watching for the hilariously ‘hi-tech’ dial-up internet they both use.

Robin Williams and a magical cast of relative unknowns light up the screen in this wonderful story of one teacher’s determination to rescue the souls of his students from the deadzone of conformity they are all being groomed for. The Australian director Peter Weir was at the height of his powers as he steers the ship with absolute confidence, secure in the knowledge that his lead actor was a one-in-a-million superstar.

Not so much a Christmas movie as a movie that stretches across Christmas. One of Hollywood’s finest (and much imitated) neo-noirs, with astonishing source material converted into movie gold through pitch-perfect direction and acting from youthful Guy Pearce and Russell Crowe.  And there are few more iconic images in movies than the poster-worthy shot featuring a resurgent Kim Basinger hitting a career high as the mysterious, melancholy Lynn Bracken.

Saddle up for this one. In the days before green screen, David Lean was the unrivalled director of vast, epic cinematic event movies. But what people sometimes miss is the spectacle was never at the expense of intimate, intricate character stories. Through the mechanism of a love-triangle, Lean and his writer Robert Bolt (Tarantino’s favourite scribe) tell the story of the Russian Revolution as it impacted on all these complex, conflicted characters’ lives. An unforgettable experience.

Almost an anti-Christmas movie, most notably in the hilarious scene where Viggo Mortensen’s ideologue father insists his six children celebrate “Noam Chomsky day” instead of Christmas. No other film feels quite as relevant for our times as this one, as it tells the story of a family who live in the wild, a million miles away from ‘materialistic’ culture, being forced to re-enter mainstream American society after the death of the kids’ mother. When they learn of her family’s plans to give her a traditional burial, they set out to retrieve her body and give her the Buddhist rite she wanted. It’s a beautiful, heartbreaking film about idealism, grief and reconciliation and features one of the all-time best ensembles of child actors.

There is nothing quite like early-career Eddie Murphy. He was a force of nature and some filmmakers managed to capture this. Parts of this movie may have dated a little, but it’s got one of the most straightforward Christmas messages of all, and once Murphy enters the story, you just can’t take your eyes off him, as it quickly dawns on you that this is what comic genius looks like.

Not the Judy Garland film that most people choose, but the first non-singing dramatic role of her career and still one of the most beautiful films she ever made. A couple meet and decide to marry before he heads off to war – but the impediments to achieving this in twenty-four hours stack up and it looks less and less like it may happen. Achingly romantic, if I tell you one of the best sequences involves our hapless couple going on a milk round (!) you may miss the serious, touching themes of seizing the moment and risk-taking that this lovely story embodies.

Ok, I give in. Here is an unadulterated, what-it-says-on-the-tin Christmas movie. And it’s a cracker (sorry). Sarah Jessica Parker brings a truckload of charisma and comic timing to a moving, magical and romantic tale of a family descending on their parents for Christmas. It’s a story that most of us can relate to on some level, and while this doesn’t break the mould it does its one job exceptionally well.

In a super-hero-obsessed age, here’s an earlier Batman film that’s also, weirdly, a Christmas movie. This was the purest of the Tim Burton-era comic book adaptations, where he had won full artistic control after the success of his first venture. And what you may fear this lacks by the absence of a vintage Jack Nicholson, it amply makes up for in peak-form Michelle Pfeiffer’s movie-stealing turn as Catwoman.

Head over to our Instagram page to check out our MetFilm Advent Calendar – filled with further viewing recommendations from our staff and tutors.

Ready to start your filmmaking journey in 2021? Download a prospectus today!