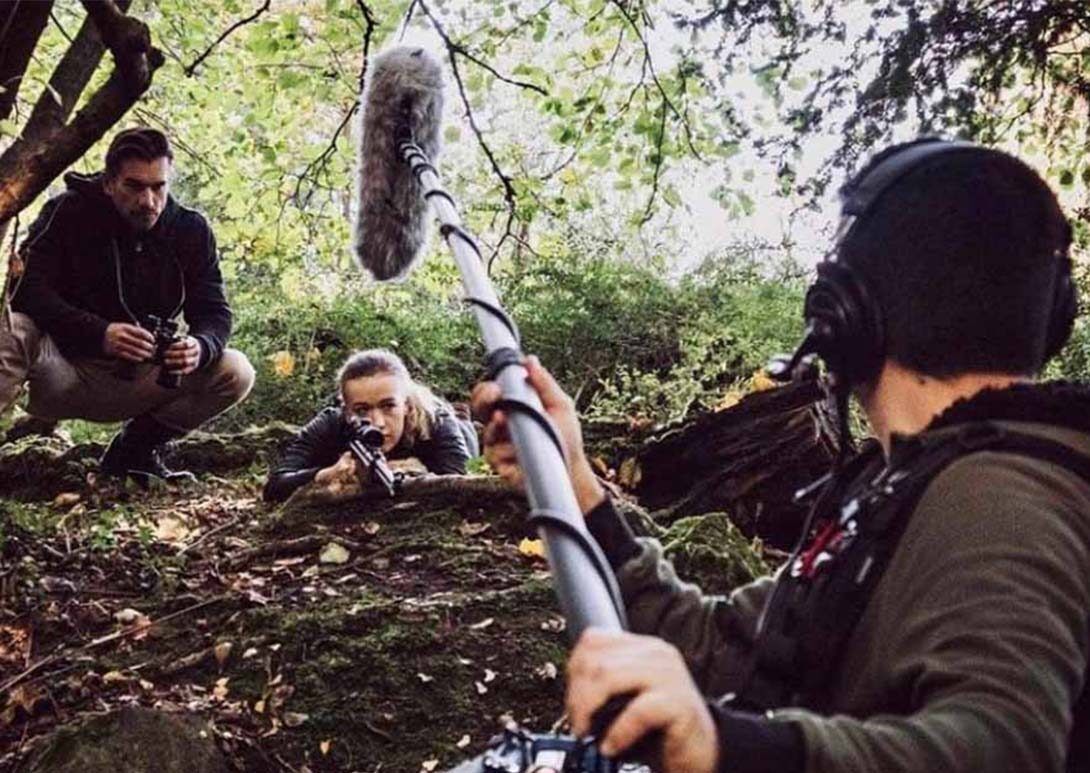 Since graduating from MetFilm School Berlin in BA Practical Filmmaking, William Lundahl has lived and worked in Germany, Sweden, and for the last five years, London.

Now working as a Production Sound Mixer and Editor at Pinewood Studios, we caught up with William to find out his top tips for getting into the industry, what he learnt from his time at MetFilm School Berlin, and the one thing he wishes more film lovers knew about sound production…

Hi William! What is your favourite part of sound production?

What I love about my job is that every day is different. My job is basically about constant problem solving, and I need to challenge myself on set to overcome potential problems before they happen and possibly ruin a take. For example, at a new location, I need to figure out where I can hide microphones, how my boom operators should be positioned without casting shadows, reflections, or being in frame.

It’s a job that always keeps you on your toes, and you have to always be ready to step in quickly to make the shoot go as smoothly as possible. Here’s an example of a potential problem that hits me every time I have a shoot planned at Pinewood Studios… who decided to build a film studio right next to Heathrow Airport?!

Working as a Production Mixer and Editor, how does your role change depending on the production size?

Whenever someone approaches me about a job, my first question is what kind of shoot it will be. A small production is going to be vastly different to a larger one – will I need additional boom operators? Can I do it all myself?

I have worked on documentaries that only require me with a boom and some wireless microphones, which is no problem. However, while I was on set for the feature film Sparrow’s Call, I had to bring additional crew in, as we had a lot of actors to wire. We were filming on a strip club set with multiple cameras, eight actors with dialogue, and a ton of extras.

On bigger productions, I tend to take a step back and focus mostly on the mixing aspect, and let my sound crew do what they do best. On some smaller shoots, it’s just me with a sound bag, and then I have to do everything.

How did you get involved in the feature film The Bystanders?

I got involved with The Bystanders through building my reputation as someone passionate about my work, and easy to work with. Somewhere in a conversation, my name had been mentioned in a positive manner, and I was offered a job. It was a shoot in the middle of the pandemic, so Covid restrictions were top priority: daily tests, bubbles, and a socially distanced film set. It’s like what I said about problem solving – this had never been more true than during this project!

Filming took place in London, and I remember it being especially stressful, as every piece of kit had to be sanitised after an actor had touched it. I now hold the cleanest sound equipment in England, and it reeks of cotton candy hand sanitiser.

What do you wish more filmmakers and film-lovers knew about sound production?

There is a saying that sound is 60% of a film, and unfortunately, that is something most directors find out during editing. You can have a film with poor video quality but good sound and get away with it – take Paranormal Activity for example. But try to watch Avengers Endgame on an airplane with those cheap earbuds the airline provides, and you’ll understand what I mean… it’s a great film, but it’s missing something. It’s missing sound.

Sound is something that I feel filmmakers should pay more attention to. It’s very easy, especially in the earlier stages of your career, to focus only on cameras and lenses. I remember being on student films that were shot on a Red Epic, Zeiss lenses, and the entire package, and then tried to record sound with a Zoom H4n.

If you want your student film to ‘feel’ like a film, get clean dialogue of your actors. Replace every other sound with foley, and hear the difference. It will sound like a movie, and you’ll feel like a filmmaker.

You’ve mentioned finding new opportunities through past connections – how important do you think this route is into the industry?

One topic I wish film schools would focus on more is marketing yourself. I have found that most jobs come from recommendations from people I previously worked with. I don’t suggest that you should be kind and easy to work with just to get work, but if you show a positive attitude on set, and are good at problem solving, people remember you for future projects.

I have had some of those moments when I’ve been looking for another boom operator and I had to choose between two candidates. If I had one candidate with less experience, but is easy to work with, versus one who has done previous projects, but comes with an attitude, I go with the one I can work best with every time. We are, after all, going to be on set for 11-14 hours a day!

How did your time at MetFilm School Berlin help develop your skills?

My time at MetFilm School Berlin gave me a chance to test out different departments, and to work with experienced tutors who could guide me and tell me how to improve. It was such an intense course, and we got to do everything, from basic exercises to web series, a feature film, along with shorts on the side.

I had always had filmmaking as a hobby, ever since I was a kid, but being part of MetFilm School truly made me realise that this was not just a hobby, this is what I wanted to do with my life.

What’s the most important lesson your course taught you?

This is going to sound cliché, but it was probably not to give up. I have made good things during my time at MetFilm School, but I’ve also made slightly worse projects. I look back at some of them, and could probably pick them apart before the title even appears. However, this was a great way to learn. The way I see it is that I see an improvement between what I do now versus what I did then… it means I’m going in the right direction.

MetFilm School was good for me because it gave me the chance to practice over and over again. It gave me an opportunity to make mistakes, learn from them, and then become better and more confident in my projects.

Never close a door! Be kind and professional to whoever you meet. You never know when you’ll be running into those people in the future. I have met several actors I worked with in Berlin at Pinewood Studios, or crew I worked with three years ago, who suddenly thought of me and gave me a job or project. If you are good and easy to work with, people will remember it.

Don’t forget: it takes years to build a reputation, but less than five minutes to destroy it.

Go inside Pinewood Studios Foley Studio in this BAFTA video!