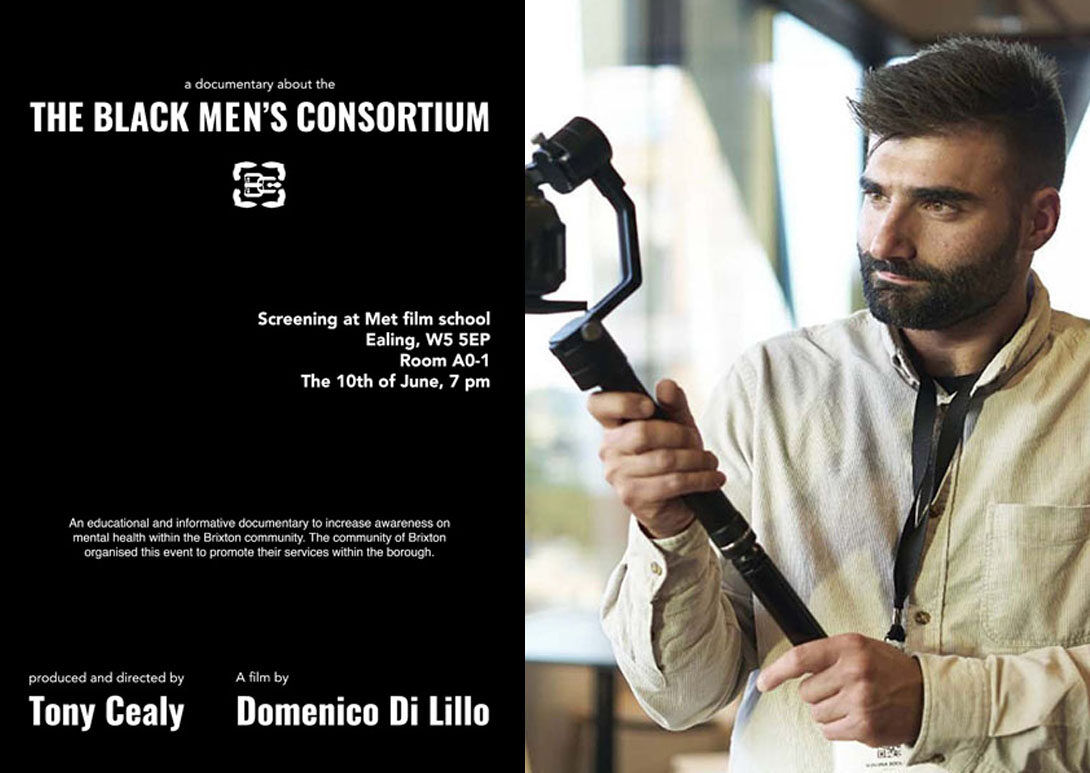 BA Content, Media & Film Production student Domenico Di Lillo recently had the opportunity to co-direct The Black Men’s Consortium, which was also produced and co-directed by Tony Cealy. The documentary follows The Black Men’s Consortium, a group who use drama to explore and express their mental health, helping to remove the taboo and stigma that surrounds these topics in society.

Through their work, the group has been able to create a space in which differences of opinion, unspoken feelings, and resentments can all be safely voiced and shared. Involving the view and experience from the local authority, community, and local NHS services, the documentary aims to raise awareness on topics such as suicide prevention and mental illness.

The documentary will be premiering at MetFilm School London this Friday at 7pm, and in anticipation of the big night, we spoke to Domenico to learn more about the project, what drew him to the documentary format, and which non-fiction films have inspired him lately.

Can you tell us a little about the documentary?

It’s about a group of men that have been able to express their issues and experiences with mental health through drama. We made it to show how we can improve certain areas and methods of treatment. Talking about certain topics, such as depression or suicide, still holds a lot of taboo, even though so many people suffer from it. I think that if we expose those issues and speak about them more, we can give support to those struggling.

For this project, you worked with Tony Cealy, a theatre arts practitioner and trainer. What were the highlights of this collaboration?

It was such a great experience, as it was an amazing opportunity to learn from someone with such a wide artistic background. Something that I really appreciated about working with Tony is that he gave me a lot of freedom to communicate the message he wanted to express.

I was fascinated by the way he could control the cast and the audience (especially at the event we held at Brixton Library), and by how comfortable he made everyone feel, which allowed them to express themselves freely.

Watch the trailer for The Black Men’s Consortium, co-directed by Domenico Di Lillo and Tony Cealy

How did you approach the subject of mental health issues with consideration for your cast, crew, and audience?

Talking about a sensitive topic such as mental health isn’t easy, especially when interviewing people. I believe that each of us has a different type of sensitivity to the subject, and for me, it is important to understand the type of person I’m interviewing before asking any questions. There are so many ways to ask the same question, so it’s finding the best way to start a conversation.

How has your time at MetFilm School contributed to your time on the documentary?

I am really passionate (almost obsessed) with documentary, and this is because of MetFilm School. I had studied documentary during the first year of my BA degree, and I remember that there was a long list of documentaries to watch. I didn’t really have any interest at the time, but after I was introduced to this style of storytelling, and the difference you could make with it, it started to interest me. I ended up watching every documentary on the list, and that was my introduction to the format.

Can you share a standout memory from your course?

I have so many good memories about my time on the BA Content, Media & Film Production course, but I would say that one moment which really changed my point of view about storytelling was during my first year, when we were introduced to smartphone filmmaking. Something just clicked in my mind, and I realised that, to tell a story, I didn’t need a lot of equipment, or the most expensive camera, but only my own will to tell it, and my creativity.

Finally, in line with your documentary, do you have any recommendations for inspiring content?

A film I watched that really made me understand how powerful and mind-blowing a documentary can be MetFilm Production’s The Reason I Jump by Jerry Rothwell. That was the moment that I realised it was possible to change minds with documentaries. I don’t really have the words to express how I felt after watching it, I was simply inspired.

Watch the trailer for The Reason I Jump here