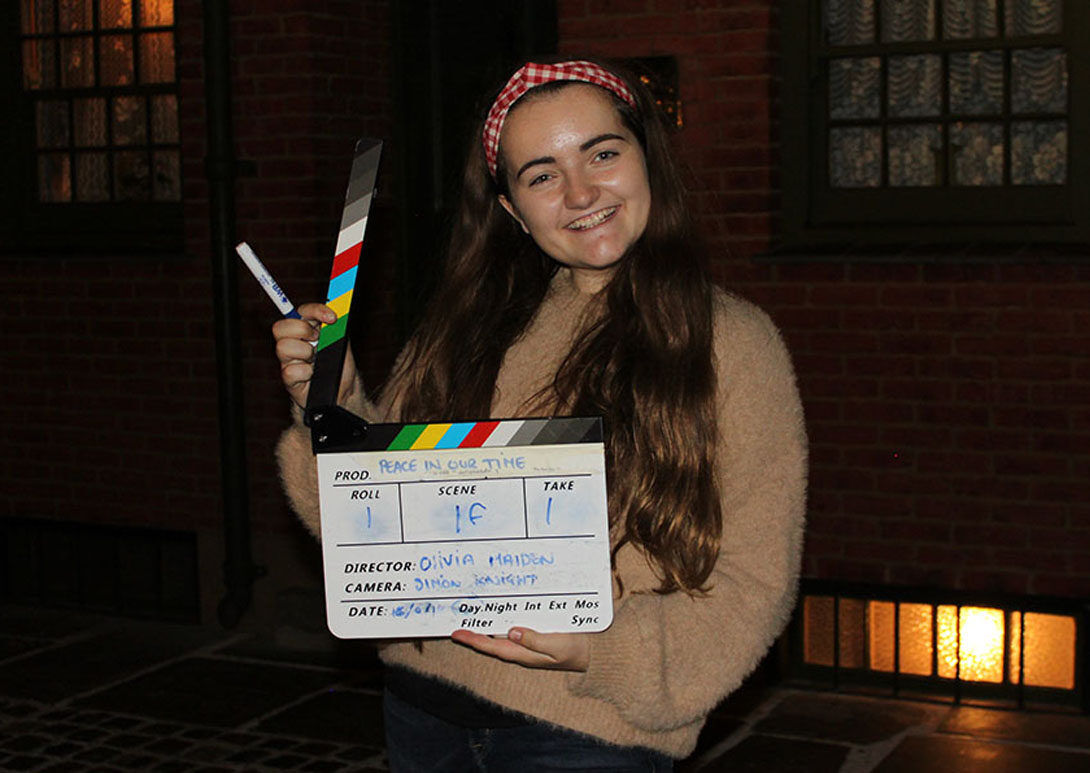 For many of our students, Ridley Scott is an inspiration in the industry, and a director that many of them dream of working with one day. For Olivia Maiden, a BA Screen Acting student at MetFilm School London, this dream became a reality earlier this year, when she earned a role in Scott’s upcoming feature Napoleon.

Starring Joaquin Phoenix and Vanessa Kirby, the current plot is said to follow the life of Napoleon Bonaparte through ‘the prism of his addictive and often volatile relationship with his wife’. Olivia will play one of the singing nuns in what she describes as an ‘exciting scene’, and we were lucky enough to hear how she found it working with Ridley Scott (& much more) in today’s blog…

Have you always wanted to act? When did your passion for the craft begin?

Always! I fell in love with musical theatre as a child after watching Matilda in the West End, and from then on, I took part in everything I possibly could. When I turned 14, my passion shifted to screen acting. I can’t pinpoint exactly what it was, but as soon as I had my first audition for a student film, all the way in Stoke, all I wanted to do was act in a film – and I was going to do anything to get there.

What was the experience like for the new Ridley Scott film?

It was unlike anything I’d ever been on before. The level of professionalism and passion from every single member of the cast and crew was incredible, and the whole atmosphere was electric. Talking to and being directed by Ridley Scott was amazing. He puts so much thought and care into every actor, every character, and every decision.

The energy and enthusiasm that he has for the story ripples through the set, and it makes everyone eager to work that much harder for him.

Were there any particular challenges you faced on set?

Absolutely. One of the reasons I moved away from theatre was because of stage fright, which is something I don’t usually feel on set. However, when we turned up, we quickly realised that we’d be having to sing and act in front of 150 cast members, with some really accomplished actors on set.

It really helped that there was a group of eight of us, and we all rehearsed and rehearsed. The Assistant Directors on set were also great in making us all feel super comfortable. At times, I found it difficult because we were shooting the same scene over multiple days, but everyone on set always found ways to keep it interesting and fresh.

Having directed award-winning shorts yourself, what’s the most important thing you look for when starting or joining a new project?

I think I’m still at the stage in my career where I’m trying to say yes to absolutely everything, on or off screen. Over the past few years, I’ve had the opportunity to learn from some incredible filmmakers and try to implement that in some of my own short films.

I know it’s a given, but I think passion is key. It boils down to if you care, the whole team will care. One of my favourite films I’ve made was a 5-minute short filmed over two days in Cornwall, set in the 1940s. It was crazy (we had twenty children on set!), but without a doubt one of the most rewarding shoots, because every single member of the crew, cast (and their parents) were so hard-working and passionate.

You frequently act in the projects that you write and direct. How has your time at MetFilm School helped you to balance these roles?

This is something that I’ve really struggled with before, but MetFilm School gave me the confidence in myself that it is absolutely possible to do both. Directing myself is challenging, but I’m so fortunate that I’ve worked with the same Director of Photography, Andy Qualtrough, on three previous shorts. We work so well together, and I trust him implicitly with my performance.

Writing and directing also gives me some of the more creative choices I crave when not acting. Similarly, being at the School has given me the opportunity to try so many other roles that I usually wouldn’t be brave enough to explore. It’s given me a much greater understanding and appreciation of how important every role is, and how everything slots into one whole creative, cohesive vision.

You’re also the founder of Dream Hive Films – what was the idea behind this company?

I created Dream Hive Films when I was 14, when I realised that the only way I was going to be able to act in roles I really wanted to see was by creating them myself. I made my first short film, Never Alone, to create showreel material, but it soon became much more of a passion project close to my heart. The story is about childhood bereavement, and I was so determined to make it the best it could be – I actually held auditions in our local village without telling my parents!

Because I was so young, I created the company to prove that children have such a unique voice and perspective on life that I sometimes feel is ignored. Every film I’ve made so far has incorporated children; I just find directing them so exciting, as they’re like sponges, and have so much to offer without the inhibitions we place on ourselves as adults.

Finally, having already ticked off a huge director with Ridley Scott, who would be your dream collaborators in the future?

That’s a difficult question… everyone! My dream project would be acting alongside Tom Hanks and Octavia Spencer in a film directed by Greta Gerwig. Tom Hanks has always been an inspiration, especially with his focus on telling real-life stories, and I’ve always admired Octavia Spencer’s versatility and approach to acting.

Ever since I watched Ladybird, I fell in love with Greta Gerwig and the way she writes and directs. It’s so real and rooted in so much truth that it feels like you’re there with the characters. I’m also going to have to say Christopher Nolan, as I think it’s incredible the way he combines physics, story, and entertainment. And also Richard Linklater, as a huge Boyhood and School of Rock fan!