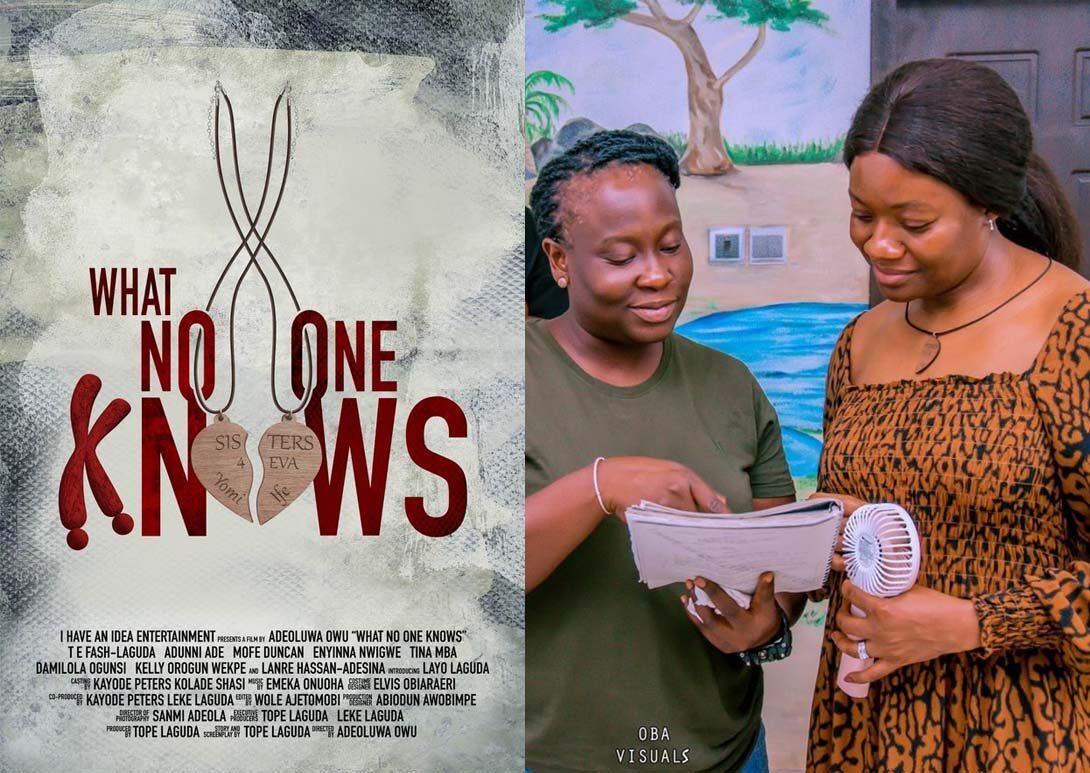 Back in 2006, Temitope Laguda had an idea for a feature film, but due to other responsibilities and obligations in her life, she made the choice to set it to one side for the foreseeable future. Fast forward 16 years, and Temitope is preparing to take her feature-length drama What No One Knows on the festival circuit. When she made the decision to follow through with her story, she enrolled in our Part-Time Acting for Film course, brushing up on her skills for the upcoming project.

As well as acting in What No One Knows, Temitope Laguda also served as the writer, executive producer, and producer on the project. Having taken on so many different roles, we were eager to hear more about her experience on set, what it meant to her to leave the idea for so long, and how her time at MetFilm School helped prepare her for the role…

Can you give us a quick introduction to your upcoming feature, What No One Knows?

What No One Knows is a feature length drama about 2 girls, Oriyomi and Ifelolu, who became friends when one of them moved back home following the passing of her parents in the UK. Although very different personality-wise, Oriyomi and Ifelolu’s bond gets increasingly stronger, with the girls vowing to do everything together.

Time and life go on, and they manage to make their different personalities work, even using this to complement their careers; one a caterer and baker, the other a photographer. Through the film, events unfold and uncovered secrets lead the friendship on a downward spiral. The movie ends shockingly, and unforgettably.

You mentioned that the idea for the film came to you 16 years ago – what inspired you to finally write the screenplay in 2018?

The idea came to me back in 2006, when my daughter was just eight months old. I tried to sell it to a few of my contacts, having come from an entertainment background prior to moving to the UK, but was unsuccessful. I then somehow forgot about it when the need to contribute to my family became extremely important; more important than me dream. The joys of being a parent, huh?

I experienced a challenge at work more recently, which then reminded me that I never belonged in the corporate world, and I realised how unhappy I had been, just going through the motions of earning a salary; existing without living. As a result, I decided to pick up the story and start developing it.

At the same time, I enrolled in the Part-Time Acting for Film course at MetFilm School, as I needed to brush up on my skills and remind myself why I loved this!

Is it typical to your creative process, to leave ideas for a time before developing them?

It’s certainly not typical. This was a one-off situation, and one that I hope and pray will never happen again. That said, I can leave a story or an idea for a week or so, at times, to allow more ideas to flow. My typical approach to improving the final product isn’t to leave something, though – I tend to engage other writers, and run my ideas past them. Their suggestions (and my pushback) give me either fresh and new ideas, or the confidence to know that I’m in control of the story I’m telling.

What was the shooting process like? You mentioned filming in Lagos, Nigeria – do you have any standout memories from the project?

The shooting process was out of this world! Shooting in Lagos, Nigeria is a different experience on its own. There are so many challenges that filmmakers face in Nigeria, as you are constantly swimming against the tides, in every facet of the industry.

We shot for 21 days, and there was a different challenge on every single one. A standout memory for me was when I was almost beat up by an actor on set! That’s certainly a story for another day though!

Having worked as a writer and producer on the film, as well as acting in it, how did you manage these different roles?

Managing it all was definitely hard, really hard, and I don’t want that to happen anymore. As a matter of fact, I was the writer, producer, executive producer, and actor while on set, as well as being a mother, since my daughter played the younger version of my character. I also had to engage in a lot of firefighting – if I didn’t, I might as well have watched my project fail right in front of me.

Overall, it was a tough and a serious learning curve. Sometimes, I felt like aspects of my performance could have been better, but strangely, it was never to do with my behind-the-scene camera roles. I believe that I am good at leaving my problems at the door, and ensuring that I can switch roles as required.

How did your time at MetFilm School develop your creative skills?

If I didn’t attend MetFilm School, I wouldn’t have had the level of confidence I had to even go ahead with my idea. I also trained with an acting coach separately for my role, because you never stop learning, but the foundation from MetFilm School really helped. What really stuck with me from the course was the improv lessons, I want to keep doing more of that in the future. The lessons that we had on Acting Technique also stood out to me – they helped me to identify what I was most comfortable with on set.

Finally, what type of stories would you like to tell as you continue to grow in the industry?

Hmm… I don’t want to be seen as an ‘unhappy person’ (there are a number of writers that can fall under this umbrella!), but I do love stories that talk about the darker issues in our society; stories that are generally seen as uncomfortable. As much as I would love to act in a comedy, I’d much rather tell more serious stories that will get people talking, asking questions, and wondering what the writer was thinking to have come up with such an idea!

What No One Knows means so much to me. It’s not everyday you write a story inspired by your own child when they are a baby, and to have them act in that same story, 16 years later. I had no words to describe it.