What makes Sicario so brilliant? 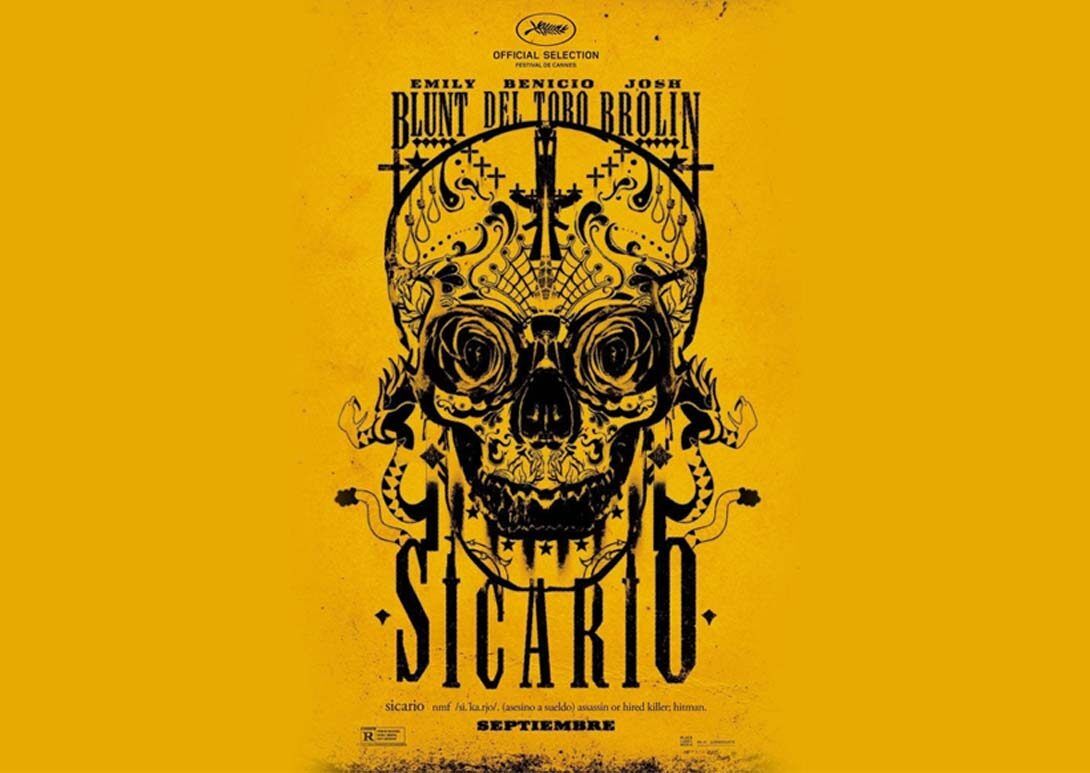 From the moment we click play on Sicario, almost at once, we’re uncomfortable. There’s little music. A sparse landscape. Claustrophobia greets us, and we’re beckoned in. It wouldn’t be Villeneuve if we felt any other way.

We’re greeted by a very real scenario and a very real threat – the world of Mexican drug cartels, and the threat they pose to those that stand up to them. It’s a male dominated world, save for Emily Blunt’s character, Kate Macer, an FBI Special Weapons and Tactics Team agent.

The story of Sicario

The ever spiralling hierarchy of the drug world, means that Macer is swiftly drafted into the upper echelons of a government task force, set-up to seek out some of the more dangerous gangland figures. Here, Macer finds out that the level of indifference to life, and the reckless abandon of morality in their cause, means she has to toughen up and stay onside. She is the mirror for our moral compass throughout. While she attempts to hunt down and prosecute the mob bosses on legal terms, increasingly she’s reminded that the rules to the game are skewed, the deeper you delve.

Josh Brolin and Benicio Del Toro play characters that are made for Villeneuve. In Prisoners, he showed us that he is a master of suspense, carefully dragging your emotions one way, then another, and doing the same with your morals. In Enemy, he moulds the every day into the sinister. With Brolin and Del Toro, he has room to manoeuvre duplicity in spades, and uses just enough ambiguity to keep you unsure until the last. Brolin heads up Blunt’s new unit, and Del Toro is a colleague whose beginnings are unclear. Both men are deeply untrustworthy, the second you set eyes upon them.

The characters of Sicario

As the film progresses, Blunt is more and more restricted by her morals, unable to walk the same path of her contemporaries who profess by their actions, that breaking the law is necessary to uphold it.

The ever so slight disappointment is that Blunt’s character doesn’t quite get the finale she deserves, and this matches the film – which slightly trails off towards the end, its aims shifting, its way impeded by one character’s motives, rather than a conclusion for the cast. There are incredible and tense moments which still make this film a more than worthy contender for film of the year, yet the bar has been set so high by Villeneuve in the recent past, that anything below a spectacular finish, is seen as slightly off form.

The film does round things up nicely, and by nicely, we mean awfully, pointing as it does to the inevitability of continued drug pedalling, corruption and gang violence. And while Blunt’s character gives us some notion of hope, at least for a short while, that there are those that will strive to uphold the virtue of the law, the reminder is the old adage: that nothing changes but the seasons.

What can we learn from Sicario?

A skill that blossoms in being taught, but seasoned by being used. Villeneuve’s first 3 features all won awards, yet he made his first feature at the ripe old age of 33. This is lesson enough for the aspirational among us, as it proves 2 things: Firstly, filmmaking is a craft, and is not always mastered at the age of 21. Use what you have learnt at film school to cultivate your style, to seek out the genres that excite you, to experiment with techniques that intrigue you. Secondly, as a director, your style can be malleable, and there should be a willingness to seek out opportunities that test and stretch you. Villeneuve has, in his first 3 Hollywood features, proven what versatility he has. Again, this is cultivated. It is no accident. It is brought about by applying your skills to varying genres and discovering what works, and what can be altered.

Roger Deakins worked on Prisoners with Villeneuve and was rightly lauded for such a gritty and grimy feel he was able to create in the film. In Sicario, he has once again proved how valuable a Director/DOP relationship is. A dusty, baron landscape accompanies the film, aptly mirroring the almost impossible and endless task that the FBI has on its hands. A great deal of the film is set at night, yet the cinematography suffers not for the lack of light. For those that wish to DOP, watching films like this, and seeing how the camera movement and lighting is achieved, is a wonderful lesson in matching tone and mood to subject.

Jóhann Jóhannsson penned the score for Prisoners, and it’s easy to see why he was brought back. Thankfully however, the tone of this film does not require Hollywood interference in the form of strings, but relies more on (to quote Forgetting Sarah Marshall) dark ominous tones. However, the music is sparse, so sparse that you are more often that not led by the tone of the scene, and not the music. A refreshing use of the medium. When the dark and edgy tones do make their presence known, it only adds to what bleakness there is.

In terms of music, there is a lesson here. Less can indeed be more. Your job as a filmmaker is to tell the story. If you didn’t have access to music, how might that affect the tone of your film? What challenges would you face if you had no budget to score your short, or feature? Then, what if you only had budget for one or two music cues? Where might you use them? It’s fascinating when seen in Hollywood, as the resources are not the issue. Therefore, it is a choice, and a director’s stylistic one at that. For any directors or editors, this film is a good showcase for use of music, as it can be just as powerful when it is missing, as when it is present.

To discover more about what elements create a land mark film and launch a career in filmmaking, download a prospectus today to find out what MetFilm School can offer you.

Watch the trailer for Sicario here