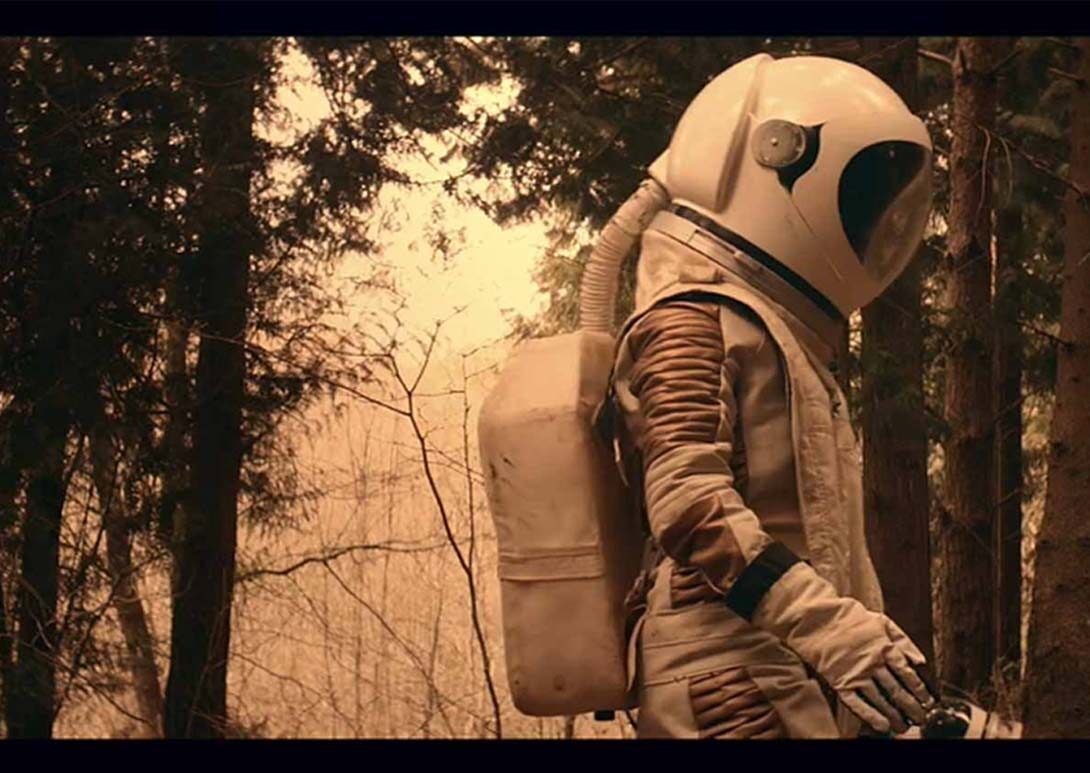 When you think of a typical student film, what comes to mind? For most developing filmmakers, working with tight budgets and limited resources is the norm – which means big genre movies are usually out of the question. Imagine our surprise then, when last year we accidentally stumbled upon the set of a glimmering space station in our sound stage shooting space. This month, we spoke with BA Practical Filmmaking students and co-directors Subhro Das & Aladdin Alisic about their experience making PHARE – their own Sci-Fi blockbuster homage that reaches for the stars.

What inspired us to make a science-fiction short?

In December 2015, we actually started working on another film which was a period piece horror, but unfortunately, the funding fell through at the last minute. Since it would have been too expensive to take on through independent funding, we decided to put the project to one side and look into a lower budget option which eventually became PHARE.

We are massive fans of the Science-Fiction genre and wanted to make a short film that would do the genre justice, but with the means available to us (our savings). This project was greatly inspired by films like Phillip Kaufman’s The Right Stuff, Stanley Kubrick’s 2001: A Space Odyssey and Christopher Nolan’s Interstellar.

How did you go about creating a convincing set for PHARE?

When we first started talking to our production designer, we had a very specific vision for the space station on the alien planet. We wanted the materials used for the build, and the props themselves within the station, to be as realistic as possible and comparable to those actually used in real life. Whilst being a work of fiction, we actually consulted a physicist from Cornell on the project to keep it rooted in the science.

What was your approach to using practical effects in the film?

As directors, the two of us strongly believe that getting things in camera is always a better option than relying on achieving the entire look of the film in postproduction – which in today’s industry is becoming common practice. It’s a real shame because it truly takes away from the authenticity, which is important for the audience experiencing the film, as well as for the actors who need to truly believe the world they are in to elevate their performances.

A good example of this would be that every monitor on set actually had data feeds playing which showed the topography of the planet, oxygen levels, etc. We were actually complemented by our two actresses for this additional effort as it made them feel like they were actually on a space station and not in a sound stage.

A key element of any sci-fi film is the space suits – what was your process for costume design?

When it came to the suits, we wanted them to be more functional and more “futuristic”. A specific requirement we had for the space suits was that we wanted to be depressurized, which is why they do not look inflated like they do in most sci-fi films. Our inspiration for the space suits came from 2001: A Space Odyssey & Interstellar.

What advice would you give other student filmmakers who want to make a science fiction film on a budget?

How many pages do we have for this question!?

1. Be prepared to spend a significant amount of time and dedication towards achieving the look of your film. The more realistic you want it to look, the harder it gets.

2. Don’t take shortcuts when it comes to the budget allocation for production design and art direction. The two of us spent both of our savings combined to make this film.

3. Choose your crew carefully. On PHARE we had an incredibly supportive and talented crew who were there for us as directors and helped us realise this picture. We could not be more grateful.

4. Remember and draw upon your passion and love for filmmaking. You will end up pulling your hair out during the course of production, but that’s all just part of the fun – embrace it.

Looking back on the completed film, what are you most satisfied with?

What we are most satisfied with is that we managed to make the film the way we wanted to and espousing all the philosophies we hold dearest as directors. Also, an actual Hollywood producer complemented us on PHARE’s cinematography!

Watch the trailer for PHARE here!