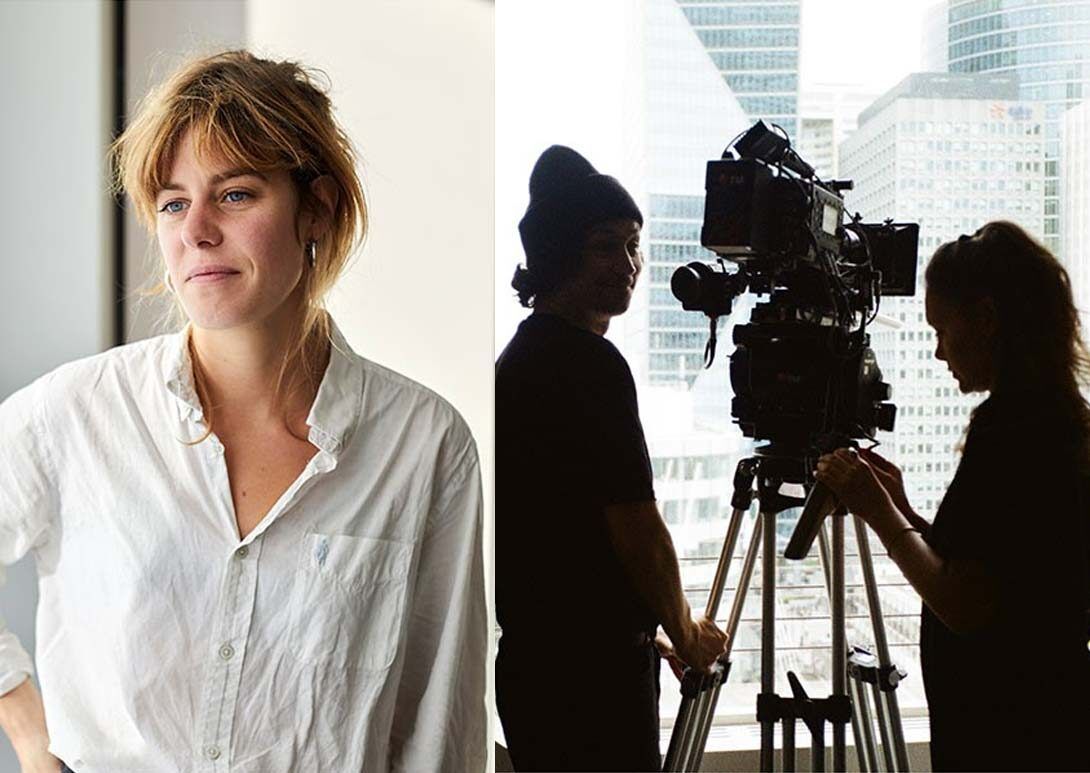 A few years ago, Nyima Cartier, a BA Practical Filmmaking graduate from MetFilm School London, read Herman Melville’s short story, Bartleby, the Scrivener. As she describes, the story follows Bartleby, ‘an accountant who finishes working one day, and replies to every question from his boss by saying, “I would prefer not to”‘. From this image of a man who ‘simply stops’, Nyima Cartier created A Quiet Man, a unique short film which follows its protagonists as they watch a man on the street from their 17th story office.

The short film has seen huge success, including a nomination for the Brief Encounters Grand Prix at the Encounters International Film Festival, as well as showing at the Clermont-Ferrand International Short Film Festival and 7th Moon, the International Festival of Young Filmmakers. To learn more about the project, and how she came up with the unique perspective that the camera takes throughout, we spoke to Nyima for our latest blog…

What drew you to the story of Bartleby?

When I read it, I was deeply fascinated by this man who is detached from everything while still being there, without any explanation, saying nothing, someone who all of a sudden stops in the middle of a crowd.

I found that image incredibly contemporary. I wanted to make a very loose adaptation, simply using this figure of Bartleby, who is at once both mysterious and ordinary.

The film has a very distinct style – can you talk about how you came to these artistic decisions?

The book is told from the boss’ point of view, which means that he spends most of the book not understanding his employee. In the book, we never really have access to Bartleby, we have no idea why he does things, why he stops working, etc. He’s a walking enigma. I wanted to make a film that would push this experience, watching someone and trying to understand him.

So, the question of the film ends up being: if you’re so fascinated, why don’t you reach out to him?

For every aspect of the film, we really had to think outside of the box, and that challenge also made it very exciting for us all. I kept thinking, ‘let’s try things, and see if it works in the editing room’. It gave us a lot of freedom. Now that I’m in prep for my first feature film and I’m planning a lot of things, I try to keep that state of mind: try things, and we’ll see if it works.

The characters feel like members of the audience, watching the action play out from a detached perspective. Was this intentional?

I didn’t think about the film being ‘about cinema’, but I did think a lot about the experience of the spectator, the ‘watcher’. It could be cinema, theatre, or art in general. The difference here, and maybe what makes it more political, is that we’re watching the character from above, we’re looking down on him.

La Défense, which is the business district of Paris where we shot, is a very vertical place, and so it does really force those above to look at those below.

The subject matter – watching someone from your window, wondering what they’re thinking, is very relatable post-lockdown. How did the pandemic influence your filming?

We shot the film a month before the pandemic ‘started’, so it luckily didn’t influence the story or the logistics of shooting. However, I did most of the post production during lockdown – I edited the film from home!

We shot the film without sound, and added everything afterwards, so I had to do the first cuts without sound, and watch the rushes muted. That was a strange experience, because Paris during lockdown was completely silent as well. It was like a dead city. I remember editing with all the windows open, in complete silence.

Watch the trailer for White Lie, a featured film Nyima Cartier adapted from her graduation film!

You also wrote the script for the short – how did you approach the process?

The film is so radical in its form, so when I wrote it, I already had in mind how I was going to shoot it. It’s a very different experience compared to when you write a story and then decide how you’re going to shoot it.

I had directed radio plays a few years ago, and I was amazed at what you could do with sound! It sparked a lot of fascinating new questions about staging: how to define the characters through their voice, and the setting through sound effects, how to stage gaps, and so on.

I used my experience on the radio to write characters and situations, and also to cast actors with the right voices. I guess the main writing challenge for the film was to maintain tension, because I didn’t want the film to be a contemporary art video – I really wanted to make a narrative film.

How did your BA Practical Filmmaking degree help in creating A Quiet Man?

My years at MetFilm School were amazing for a lot of reasons: I was 18, I had never lived abroad, I’d never lived without my parents, I didn’t speak English all that well… everything was new and exciting to me. I also loved that students came from all around the world, everyone had very different tastes in cinema, different references, which was really exciting to share.

I remember enjoying the Experimental Cinema classes, because I had never seen films like that. I loved the fact that we had to shoot experimental films, and then documentaries – we had the freedom to try a lot of different things. In France, film schools are more academic, and students are very nervous to make films that are ‘good’ and ‘interesting’. How can you learn if you’re nervous or scared? At MetFilm School, it was all about the learning process.

Finally, how did this project push you as a filmmaker?

This film taught me a lot. Before this, I had made short films in a more classical way: I would prepare a shot list, make storyboards, very specific directions, and I would get bored during shooting. With A Quiet Man, it was so different, because it was such a strange way to shoot it that I couldn’t plan everything. That gave me and the team room for creativity.

The camera team and I were on the 17th floor of an office we rented. Usually, you shoot films with a 35 lens, or maybe 85, but here we had 800 and 1000 lens – like the paparazzi! The Director of Photography had never shot anything with it, and even the renting company had never really used it, so we learnt how to do it on set. The actor was downstairs, and I couldn’t be near him otherwise I’d be in frame, so I had to give him directions through an earpiece!

Watch the trailer for Nyima’s film A Quiet Man