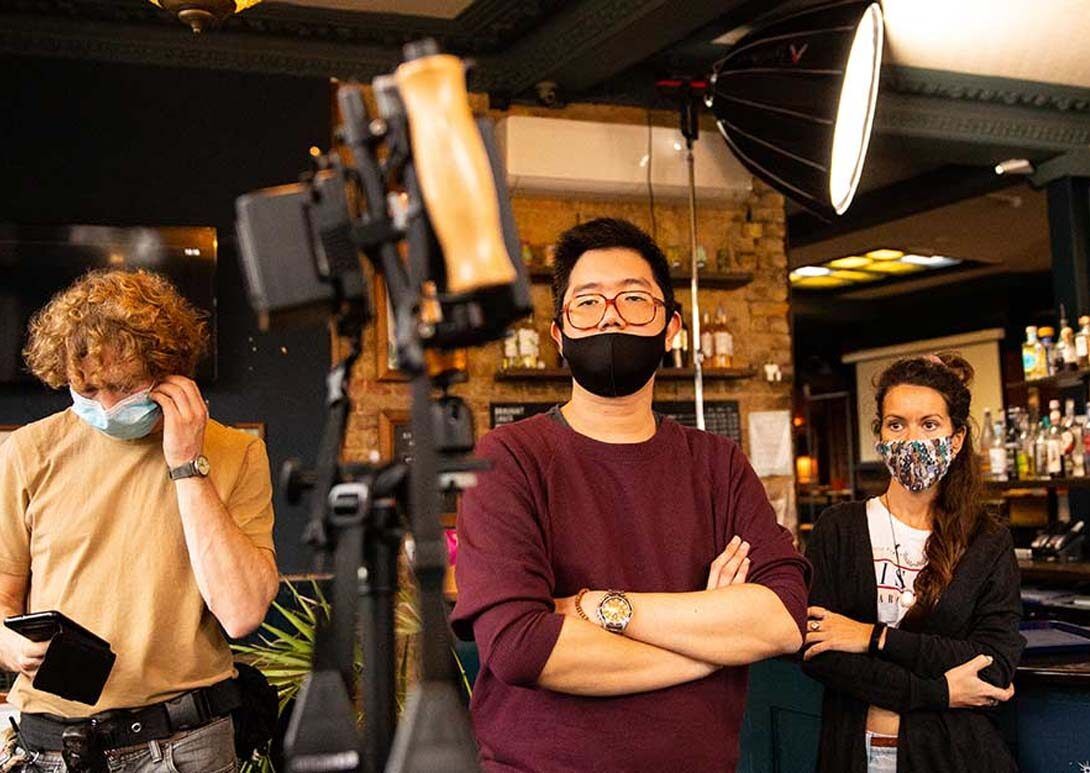 If there’s one constant in the already varied career of MetFilm School BA Practical Filmmaking graduate Kew Lin, it’s not letting practicalities get in the way of fulfilling imagination…

After graduating in 2013, Kew explored his long-time passion for visual effects by launching a career with industry-leading studio DNEG (formally Double Negative), working on major productions such as Spectre, Avengers: Age of Ultron, and Interstellar.

Just as impressive though is Kew’s own unique style of filmmaking. Over recent years he has dedicated more time to writing and directing. He now boasts a growing number of highly original, often offbeat, and always intriguing shorts. His 2019 film, Of Pets & Dinner, picked up an array of awards on the festival circuit. And in 2020, the curiously titled Uncle Goose Waits For A Phone Call was selected by the highly respected Aesthetica Short Film Festival. Both films showcase the filmmaker’s knack for committing to delightfully quirky ideas and finding “absurdity in the mundane”.

Hi Kew! Where did your curiosity for filmmaking begin?

Visual effects for film was my first love. I was 15 when I bought a movie ticket for the first time; a morning screening of Eternal Sunshine of the Spotless Mind. And I fell in love, not for its romance, nor its atmosphere. I was fascinated by the VFX aspect of it. ‘No way the camera could have shot that, how did they do it?’

How did you eventually decide to go to film school?

As someone growing up in a Chinese family in Singapore, there is something we were all made to understand. Dreams cannot fill your stomach, only money can. My pursuit of the craft of filmmaking and visual effects was at conflict with a lot of the grassroots values the community had. This was 2005, and of course, things have moved on. But at that time, the little voice inside of me came up with a cunning plan: go abroad, learn from the best, take a practical course, get a degree, make my family proud, and boom: you’re a filmmaker. What I didn’t expect was meeting all the people at MetFilm School who gave me the courage to want to be myself.

Tell us about your experience of working in VFX – what did you learn from that time?

Perhaps the biggest epiphany for me as a VFX artist was to realise how crucial technology can be when it comes to elevating the cinema experience. Technology doesn’t always have to be expensive, but it has to be present and employed effectively. While I was working with Double Negative, there was so much time and energy invested by artists and producers to work out, not necessarily the fanciest techniques or hardware to deploy, but the best ways to service the story.

Over time, I came to realise that a certain inextinguishable compulsion resides in me, driving me to leave the VFX industry. And so I proceeded onto the treacherous path of writing and directing, because, as John Lennon said, “living is easy with eyes closed”. I thought writing and directing my own films could make my eyes open to the world even more. Very quickly after this transition, my feet started to have roots and my heart started to have peace.

Your own short film work often has a playful and experimental tone – where do you think this comes from?

I was born and raised in a place where expression and parallel thinking are often subdued. And I find myself fighting against that even today. There is also an undeniable connection between my imagination + whimsicality and how foolishly naïve I am…

My poor sense of estimation and the complete oblivion to my limits could become a kind of sky-reaching ability when used in the right way. However, my experience of working in the film industry, living in London, and meeting so many wonderful and eloquent filmmakers have made me mature a lot. I’ve tried many things and made different films. And it is now my calling to develop more cinematic stories that talk about the things I’ve always wanted to do in real life but never had the chance to.

What projects are you currently working on?

I am finishing up a short film that I’ve written and directed in December 2020. The film is entitled Wasps, Sharks & Vending Machines and we shot it in London. It’s an LGBT-themed story about a condescending psychologist who has everything to say about his patients’ irrational fears but is unable to conquer his own. It is notable because it was a collaboration with several MetFilm schoolmates, and a testimony of the friendships and professional relationships we’ve forged at the School.

Finally, what advice would you give to our students working on their first short films?

I don’t know if I have any real advice for the students at MetFilm School because I feel like I’m still learning. But there is an anecdote in which a group of young filmmakers asked Director Ang Lee to give them a piece of filmmaking advice. He simply said, “Don’t do it. Quit.” To hear this from their hero, everyone was slack-jawed and upset. To which Ang Lee followed up, “But I guess, for those of you who really want to do it, you know I won’t be able to stop you anyway.”

Now here’s one from me: Don’t just go to The Grove pub, opposite Ealing Studios. The North Star across from the Ealing Broadway station has the best beer garden. With heaters.

Kew Lin graduated from MetFilm School London’s BA Practical Filmmaking in 2013. Check out his full list of credits on IMDB.