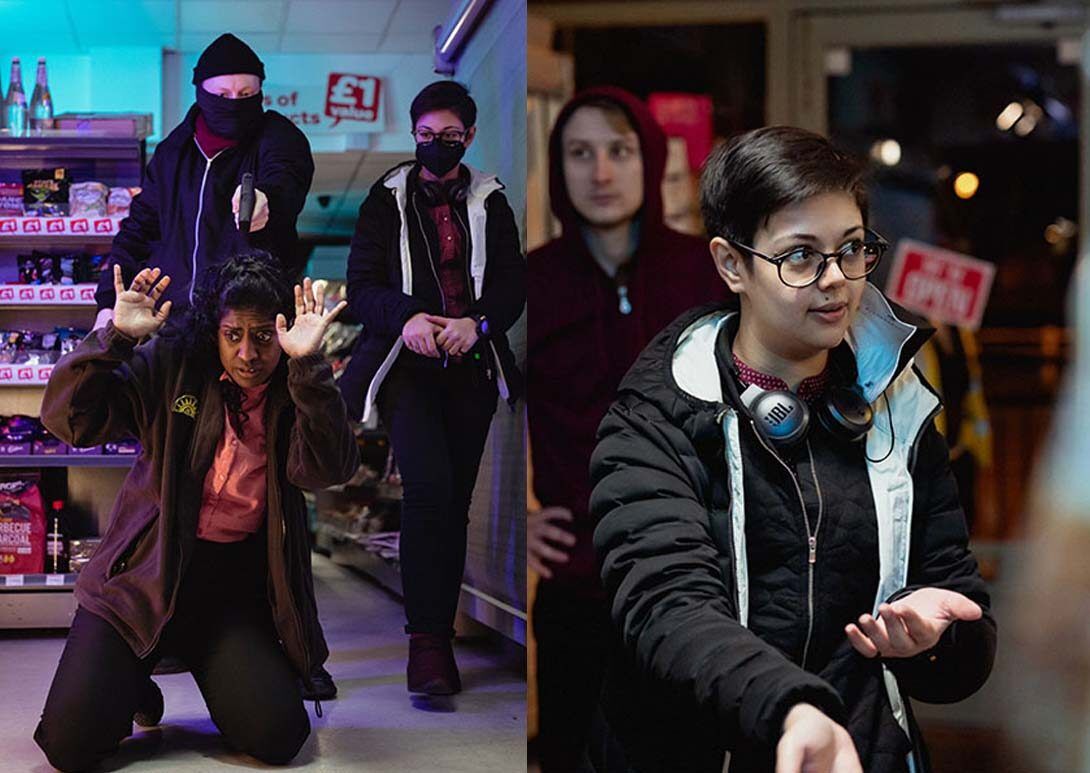 One More Minute is a crime-thriller short film directed by Srishti Chhabria (MA Film & Television Production), and follows Arianna, a Deaf store owner caught amidst the violent robbery of her store, where she must try and escape against all the odds.

Shot entirely in one location (Ealing Green Local – right across from our London campus!), Srishti, who previously completed our BA Practical Filmmaking degree, describes how the ‘labyrinthian’ location ‘helped add to the tension in the storytelling, being a small, tight space for the characters to navigate’. Already intrigued about the project? You’re in luck – today’s blog is written by Srishti, who joined us to share a behind-the-scenes look at One More Minute, from her initial vision for the story, to what she learnt from the filming experience.

In preparation for this film, the writer Baltasar Cuellar and I learned British Sign Language, and are now Level 1 Certificate holders. Our crew enthusiastically joined in on this, bringing great spirit to the project. Our endeavour was to better understand what we were diving into. This also helped me to understand and communicate better with the lead actress, Nadia Nadarajah on set. As the director, it’s very important to me to have clear communication with my actors.

My crew and I were also supported through the process by our BSL interpreter Jess Veal, and BSL consultant Brian Duffy. They helped us with communication and accurately telling a story from a Deaf person’s perspective. In addition to this, the entire crew put their best foot forward to help.

Our AD department, along with the producers, very helpfully passed along guides and information on set about Deaf Awareness and common phrases in BSL. We sought to wear transparent face masks and shields on set, or removed them during rehearsals at a safe distance. We also had great discipline onset, making sure not to speak over one another – it was the most peaceful set I’ve ever been on!

Crime-thriller is my favourite genre, and there is a severe lack of strong female characters in it. I wanted to change the trend with this project, placing the focus on a Deaf woman, trapped in a life-threatening situation, and who manages to overcome it using her ingenuity and the resources she has at hand.

In recent times, the stories about women in the media that tend to receive widespread attention are of those who have fallen victim to violent crimes against them, such as with the case of Sarah Everard in the UK, and Breonna Taylor in the States, so I felt a strong need to make a film about empowerment. My stellar team, headed by the producer, Max Mir, had a lot to offer, and supported my vision for the story. Beatrice de Gama (Cinematographer) helped to bring the film to life, and Robin Hellier (Action Coordinator) helped us with the action-crime aspect of the film, dramatising all the stunts in a safe, but believable way.

This film portrays a realistic, relatable, down-to-earth and self-made woman, like any one of us, in all of her glory.

Top takeaways from the experience

I was inspired by the success of Sound of Metal (2019) and CODA (2021) to make a film to help spread Deaf Awareness, and throughout the process, I learnt a lot about a community I knew very little about beforehand.

In essence, the film was a really enjoyable process, and a great learning experience for all of us involved. I look forward to where it’s going to take us. This film is dedicated to all those out there who think they do not have a voice. To that, I say that actions speak louder than words. We have this beautiful medium of creative expression, film, which is open to anyone who has a story to tell.