Making the cut with editor and MA Graduate Dan Gage 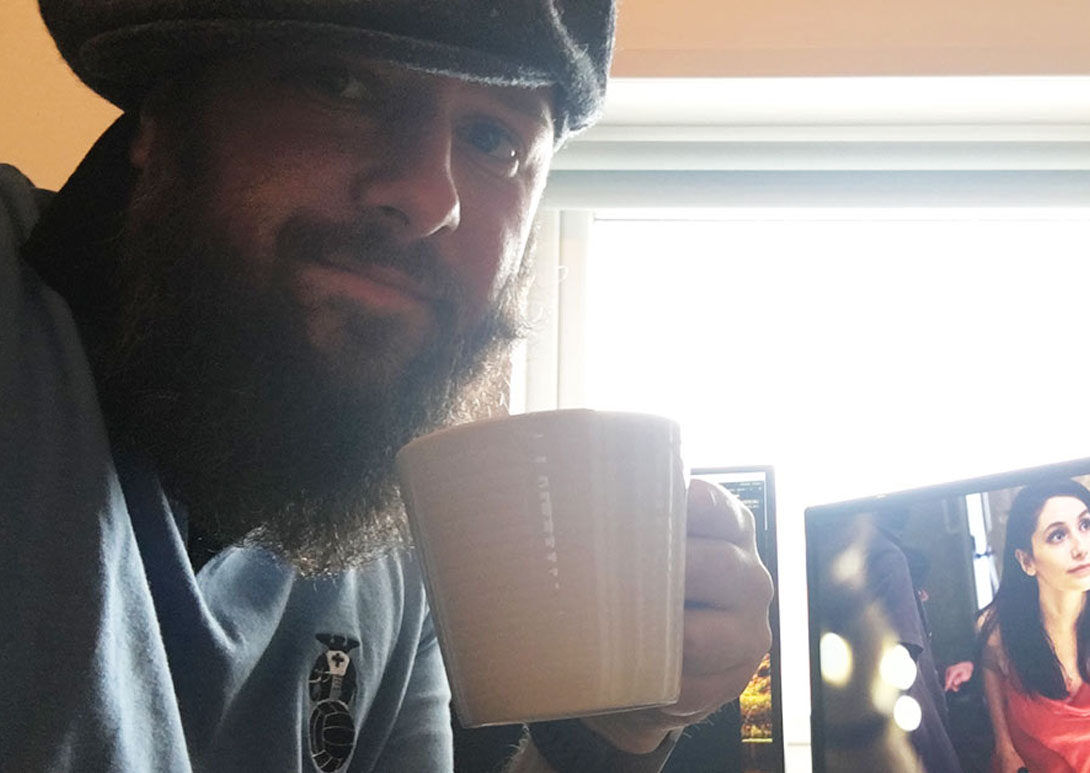 With social distancing measures forcing many larger film & tv productions to take an extended tea break over lockdown, the industry has had to get creative with its content. One of the most charming creations of recent months has been BBC’s home-recorded series Staged – starring David Tennant and Michael Sheen – which was edited by our very own postgraduate alumni, Dan Gage.

As an Editor and Assistant Editor, Dan has worked on numerous acclaimed TV series, including Fleabag, Home, The Split, The Crown, Pure and Broadchurch. Originally from Coventry, Dan moved to London in 2012 to study our previously offered MA Filmmaking. He said:  “I think the best part of MetFilm School was that they placed the emphasis on the students to develop themselves as filmmakers and improve their craft.”

“I always had a creative streak. In my early years, this manifested itself in writing and music.  I loved films as a kid but I’m not one of those people who has a story about playing around with their parents Super 8s or anything like that.

As I hit my late teens I became more aware of European filmmakers and enjoyed watching films that were less focused on plot and more about the emotional experiences of the characters. I loved French New Wave and remember being enthralled by the jump cuts, naturalistic lighting and performance (to a teenager from the Midlands) of the most stylish characters I had ever seen.

I had no idea what these techniques were at the time, and it was a mainstream Hollywood film (the last scene in Castaway where Tom Hanks is at a literal crossroads) that crystallised the notion that camera work, sound and editing could enhance the story being told.”

“I loved my experiences writing and directing but for me, editing is the discipline that I’m most suited to. I am most comfortable when I am making measured, informed decisions, and I didn’t feel like I was able to find a way to apply that rigour when I was directing, or writing.

Having said that, it has been hugely valuable to have a good working knowledge of writing, directing and on-set experience.  As an Assistant Editor, it helps if you can put yourself in the position of people on-set when you are processing rushes, and as an Editor, it can help you understand your director’s intentions, even if ultimately you go a different way.

Knowledge of working at the front end of production can help you spot things at script stage that might be problematic in the edit – this was particularly useful on Staged.

“On Staged there were lots of making-things-work-as-we-go. We used a shooting format that, as far as I’m aware, has never been used for British TV before so there was lots of back and forth and late deadlines.  And we squeezed five episodes into two and a half weeks. That’s writing, shooting, editing, to lock. The final two scenes for episode six came to me seven hours after our final deadline, so I had to work three days with barely any sleep.  Plus, I was able to cut performances from Samuel L. Jackson and Judi Dench which means my editing career may have actually peaked!”

A confidence boost from Fleabag

Dan believes that his big break came while working on Fleabag, he said: “Working with Phoebe Waller-Bridge was great for me and my career.

Everyone who has worked on that show has had some sort of career boost. It’s not just because the show is so brilliant. I was Assistant Editor on Series 2 and did a tiny bit of editing, which led to me cutting the Series 2 trailer. Phoebe was fantastically generous and empowering and had such an encouraging and personable way of responding to cuts – this was a huge confidence boost for me as a relatively inexperienced Editor. After Fleabag, I was suddenly getting meetings for Editor positions that I wasn’t getting before.”

The joys of collaboration

Dan Gage has also worked on the Channel 4 series, Home. It’s the story of Sami, a Syrian refugee who enters Britain illegally to claim asylum. He said, “Working on Home was a similarly empowering experience. I am always very aware of my comparative lack of experience and here I was launched into a room with some of the most experienced and creative comedy creatives, but the schedule was so tight and the script so good that we just spun off each other and created something fun and poignant that went down really well.”

The importance of a good work ethic

“It takes years of earning people’s trust before they will give you a job as an Editor or any other head of department, so everything you do as a trainee and an Assistant feeds into this. I found that for me, it was going out of my way to help people out that eventually tipped me over into Editing.

The industry is tough. It took me 13 years to become an Editor. You have to prove yourself every step of the way. It’s rare that someone will see your talent and hand you a job, so you have to grind it out. But everything you do helps you get there and gives you experiential knowledge.”

Check out a portfolio of the work Dan Gage has covered here, and find out more about our MA Post Production.