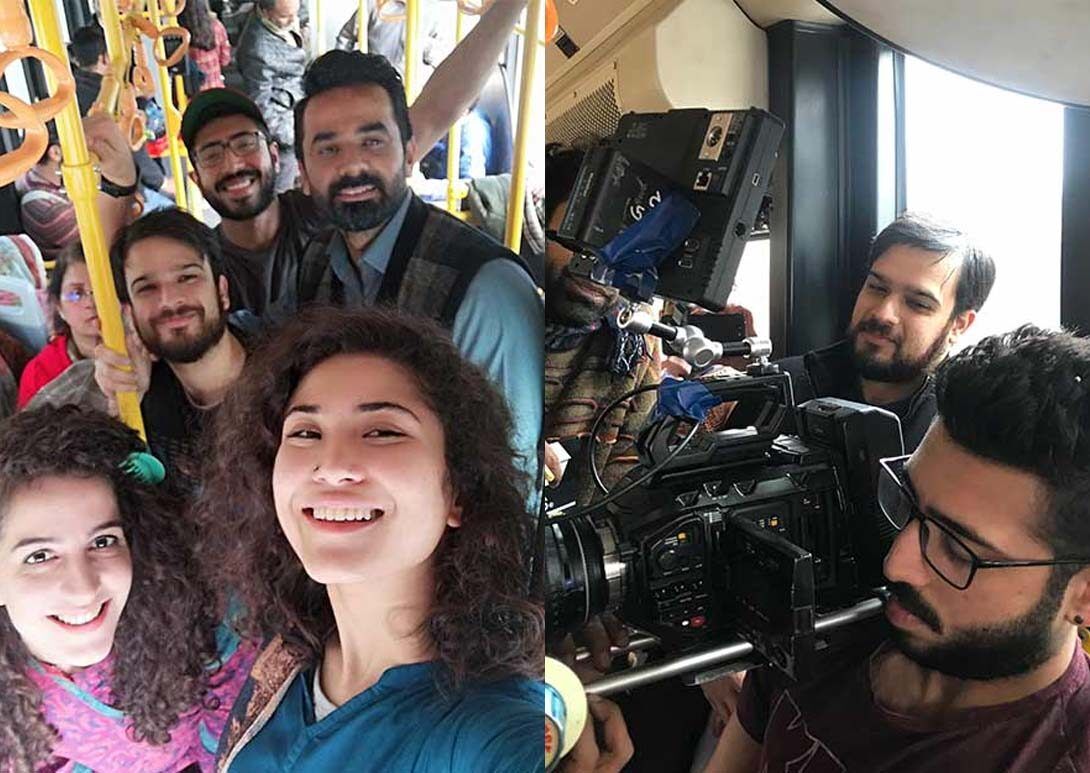 Of all the decisions our postgraduate students make while at the School, we doubt any feel as exciting as their Master’s Project. It represents an opportunity to instil all that has been learnt into a creative calling card, often to be shared for years to come and taken to film festivals around the globe. With our first-ever intake of MA Film & Television Production now completed, we caught up with new graduate Tabish Habib to learn more about his film, May I Have This Seat?

The short tells the story of a young and rebellious pregnant woman who is travelling by bus to see her doctor when she gets into an altercation with a fellow passenger. It’s a mature and considered piece of filmmaking, one that welcomes conversation around pressing concerns such as gender equality and the impact evolving technology has on everyday life.

How did the idea for the film first come about?

The inspiration for the film came from a video that went viral on social media, in which a woman is seen cursing and slapping a man who had harassed her on a bus. The anger and fear in her voice, matched with the look of guilty confusion on his face was something that I found really intriguing.

When I started writing the script, the story took on a completely different shape. In order to sincerely tell this story, I conducted interviews with both women’s rights activists and young students who frequently travelled by public transport. By speaking to these activists, I realised that I had an opportunity to address an important conversation with regards to the Me-Too movement in Pakistan. The themes addressed in this film are often discouraged in South Asia, which is why I felt that by creating a nuanced narrative, I could shed light on the lack of rights women are given in public spaces and what the negative effects of social media are on a society’s moral well-being.

Shooting with 40 extras on a moving bus sounds challenging – was there a pressure to shoot quickly at this stage of production?

The film is shot almost entirely on a moving bus on the busy streets of Lahore Pakistan, which proved to be a very difficult 3 days of filming to manage but it ended up being a very fun experience for the entire cast and crew. We couldn’t afford to shoot on the bus for too long, so there was always pressure to act quickly but the cast and crew had a lot of time to rehearse which made it a lot easier for everyone.

How did you go about the casting process?

I had a brilliant casting director named Sana Jafri, who was also my AD on this project. We worked very closely and spent a good two months on casting. Rasti Farooq is a young actress who I’ve been following for a while around Lahore’s theatre circuit and I’ve always been a huge fan of hers. When she came to read the first day, I knew she was going to play Sonia. She did a fantastic job, as did Aqeel Nasir Khan, who played Masood with a lot of nuance. I’m extremely grateful to have worked with all these talented people.

One of the most impactful elements of the film is the modern phenomenon of posting public incidents on social media. Was this something that you wrote into the script from the start?

Yes, absolutely. I think when an incident like this takes place on a bus in 2020, it’s highly likely that people would film it with their phones with the intention to go viral on social media. Also, when one encounters a dangerous situation in a public setting, people often use smartphones and social media to protect themselves, almost like a weapon. I always wanted to explore this theme and attempted to do so with this film.

What kinds of reactions have you had from those who have seen the film so far?

The screenings I’ve had with test audiences, family and friends have all been very positive. One thing I love about the film is, whether people like it or not, they always have a long conversation after watching it. Another word that keeps coming up to describe it is ‘engaging’ which is all very gratifying for me as a writer/director. I recently released the trailer online (see below) and the feedback I’ve gotten from the public on Instagram has also been very flattering.

Your particular cohort of MA Film & Television was quite a compact one – did you find yourself collaborating on your respective graduation projects?

Half of our cohort decided to film their projects abroad, which made it difficult to collaborate on productions but during post production we all collaborated a fair bit with each other. Stefano Moscone’s help was invaluable to me during the edit/post process, as was Mickey Lei’s feedback. It was extremely gratifying to receive credits on their grad films, having spent the whole year learning, collaborating and growing with them.

Looking back on the last year of the course, how do you feel you have developed as a filmmaker?

I have learned so much over the last year. That’s the most important thing. Like most people, I came to MetFilm School thinking I was going to make a brilliant grad film without realising how important it is to learn. By the second month of my MA, I realised how far I was from that target and focused solely on learning. Course Leader, Justin Trefgarne, has been an invaluable resource as a tutor. He really keeps you grounded, keeps emphasising the importance of collaboration and regularly keeps you engaged during lectures which really helps you grow as a filmmaker. I’ve improved a lot as a writer; I’m currently writing my next short and I hope to make a feature within the next couple of years.

Watch the trailer for Tabish’s graduation film, May I have this seat?