Editing and colour-grading: how to get the ‘Dune look’ 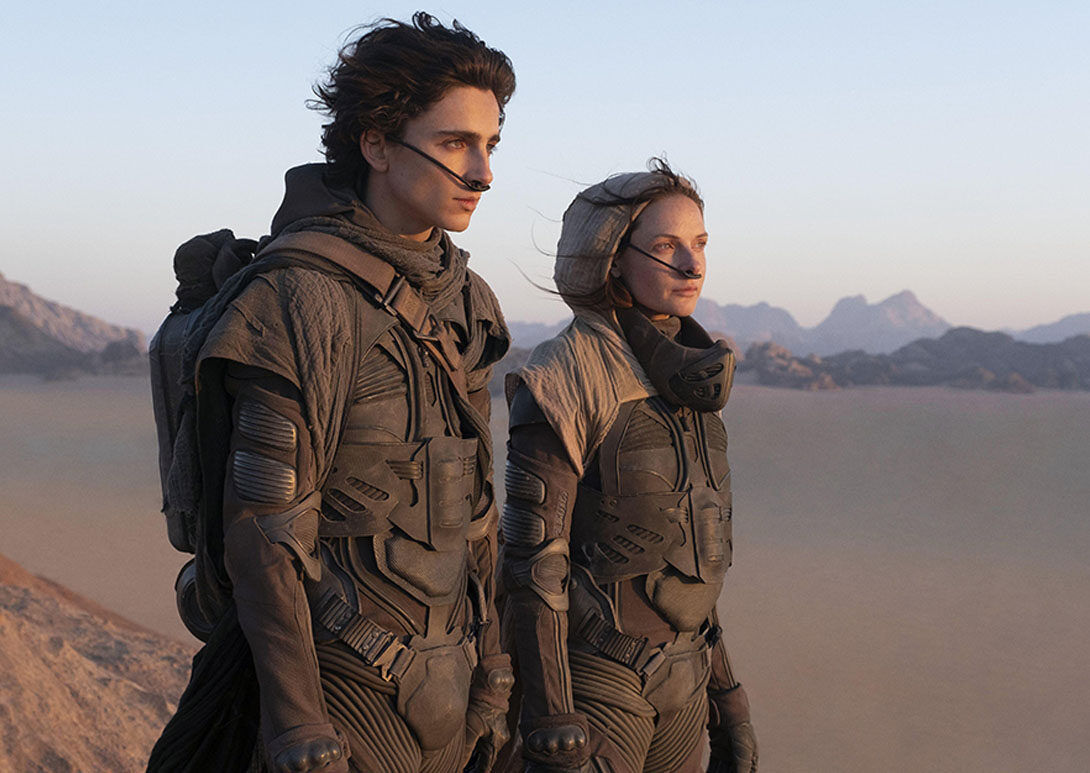 Last month, Denis Villeneuve’s reimagining of Dune picked up ten Oscar nominations, with categories ranging from Cinematography and Film Editing to Original Score, even landing one of the biggest on offer: Best Picture. With matching BAFTA nominations in nearly every category, Dune has seen major success, in particular in its post production elements.

We’ve taken a look at two key features of the film’s post production: the editing, and the colour grading, with the help of MetFilm School tutor Pete Appleyard. Read on to learn more about the process behind this award-winning film, and how MetFilm School Certificates can help you strive for the same level of success.

Dune is not the first time that two-time Oscar nominated editor Joe Walker has worked with Denis Villeneuve. The pair previously collaborated on Blade Runner 2049, Arrival, and Sicario, and Villeneuve has even been quoted saying that he ‘cannot edit without Joe‘.

From the numerous editing nominations and wins that their films have picked up over the years, Joe Walker clearly knows what he’s doing – but even he was faced with a new challenge when it came to Dune: editing during a pandemic.

‘He sat to the right of me for six years, on and off – and to be honest, the right side of his face is like the dark side of the moon,’ Walker spoke of Villeneuve. The director also took the distance as a huge blow: ‘There’s something about the interaction, human interaction, spontaneity, the energy in the room […] not being in the same room as my editor is very, very painful.’

Even as restrictions continue to everyday life, the lesson of having to adapt a tried and tested work process is a good one to learn. What Walker’s experience shows to aspiring editors is that no matter the circumstances, good editing comes from keeping a close hold of the story you’re trying to tell.

Take the visions of Chani (Zendaya), and the recurring image of the knife. Both motifs occur early in the film and continue to the end. Walker knew that these were points to focus on when editing, because ‘they’re essential as an understanding of what [Paul] is seeing and how he’s grasping events that will take place.‘ Given that the concept of Dune was originally set up in a 400-page science fiction novel, the decision to use choice motifs to carry the plot allows the audience to feel a sense of immersion without the overbearing exposition that many detail-heavy films have fallen into in the past.

Learn more about Joe Walker’s editing process for Dune in this interview with Frame.io

To create the distinctive look of Dune, FotoKem’s Dave Cole worked closely with cinematographer Greig Fraser, and the pair even created their own ‘colour bible‘ to help them both stay on brief. If you’re interested in the more technical side of shooting the movie, here’s a quick overview from Cole (taken from a longer interview with Filmmakers Academy) on how they got the footage to look that good:

‘The movie was shot on an Alexa LF and then film recorded to a 1 ASA 35mm negative and then scanned back, so we could get the film characteristics that we liked from a traditional 15-perf 65mm neg with minimal grain.’

Besides these technical details, the process of colour grading the film comes back to the same point as Walker’s editing: how to reflect the heart of the story. In many interviews, Villeneuve highlighted the need for each shot to ‘capture the violence of the sun‘, and to show nature as ‘powerful and abrasive, not beautiful’. Cold fed this message into each scene, down to the transitions between settings.

Filmmakers Academy’s interview with Cole explains his attention to detail that – even if you’ve already seen the film half a dozen times – you might not have realised how much the filmmakers were directing your emotions:

‘We really wanted to cause the audience to experience the harshness and the burn of Arrakis when you go outside the planet. Exposure was quite down on the interiors, so your eyes Irises-out. When you go outside, you then get blasted by the sun, and you Irises-down.’

A great YouTube tutorial on ‘How to Get the DUNE Look’ with DaVinci Resolve 17!

Pete Appleyard, who is a MetFilm School Editing tutor, shared his thoughts on the colour grading of Dune. He explains that ‘it would have been a huge challenge due to the limited palette available to the storytellers’. ‘The fact that the film feels so expansive and epic’, he adds, ‘is a testament to the work of the post production team as well as the Director of Photography.’

Post production encompasses a wide span of the filmmaking process, and this is one of the reasons why it is such an interesting discipline to study. This variety is something MetFilm School held onto when creating our Certificate in Post Production, and the outline for this course reflects this.

In fact, MetFilm School were thrilled to see just how much of Dune‘s post production made use of the programmes we teach throughout our courses. Joe Walker’s editing was completed using Avid, and Dave Cole waxed lyrical about the process of using Resolve for colour grading, adding that this programme was especially suited to working remotely.

Katherine Lee, a former Certificate in Post Production student, shared that the 100% practical experience approach ‘prepared [her] well for the world of work,’ allowing her to experience ‘short films, branded content style projects, corporate work, commercials and ads,’ all with the bonus of learning within a likeminded community of creatives, taught by industry experts.

From reading interviews with the team behind Dune‘s post production, it is clear that this sense of community is the most important aspect of the process. Community, as well as keeping hold of the story you are telling, is always at the centre of MetFilm School, and this is why our Post Production courses are so valuable to creatives, whether they’re brand new to the industry, or already an established member.

Watch the trailer for Dune, available to buy and rent now.