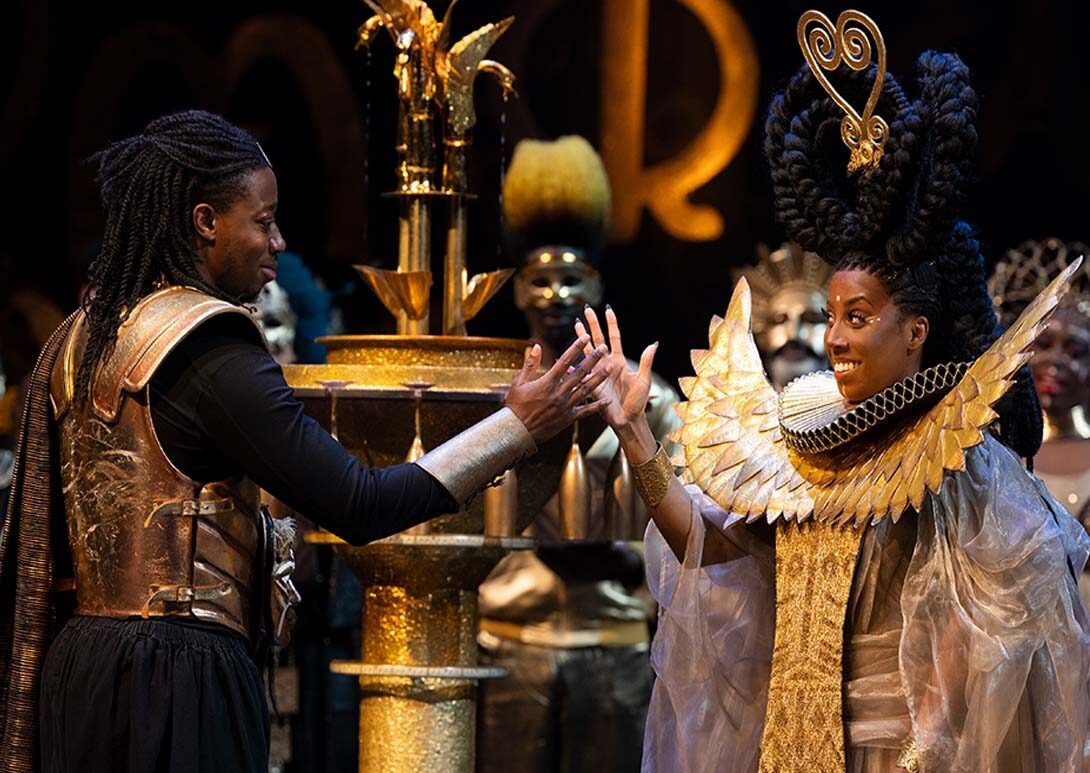 ‘That’s the life of a film director: all hell breaks loose, and you’re in charge,’ said Indra Bhose when we caught up with him in a recent interview. Indra, who is an MA Directing tutor at MetFilm School London, recently got the opportunity to direct the screen version of the Royal Shakespeare Company‘s latest Much Ado About Nothing. The stage version, directed by Roy Alexander Weise, relocates the play from 16th century Italy to an imagined future reality, and has been reviewed as an interpretation which ‘steps up, struts, and seduces in fabulous style’.

Indra joins a long line of filmmakers who work with the Bard and find themselves months into the process, suddenly able to quote lines of the plays – which we agree is a fun party trick to keep hold of. We spoke with Indra to learn more about the process of translating the stage to the screen, and how even your camera can have a role in the final performance.

Approaching theatre as a director

Directing theatre for either the stage or the screen can differ in many ways, which is why two directors are typically hired. Indra explains that, although the level of collaboration might vary, the standard process is that ‘the stage director trusts the film director’ to stay true to the material.

There are, of course, moments when it is helpful to have conversations about the process – for example, when there are dozens of people on stage at the same time. It’s worthwhile during these action-heavy scenes to ask the stage director if there are certain characters or plots that they would like the camera to focus on.

For the most part, though, there is only so much you can do or change as the screen director: ‘You have to capture the play, which means you can’t go off into any radical camera movements or mise-en-scène,’ Indra sums up. Lucky for him, the Royal Shakespeare Company are far from newcomers to recorded theatre, which means they have the perfect set up, with camera tracks and the best possible placements already in place.

Go behind the scenes of Roy Alexander Weise’s stage version of Much Ado About Nothing!

For this rendition of Much Ado, the team used a hybrid approach, combining both single and multi-camera recordings of multiple live performances, as well as some additional private shows, where Indra and the crew could film single-camera. On performance days, Indra described the challenge of writing a camera script, where the directors have to figure out what shots they needed, how long to hold each shot, and how long each camera would need after being released to find its next position.

As more and more performances are now recorded in this hybrid fashion, a knowledge of writing camera scripts can be extremely helpful, and this skill can be practiced in small ways, even just watching live performances and considering how you would approach filming them.

Treating the camera as a character

The value of multi-camera when filming a stage performance is that it allows the audience to feel a sense of closeness to the action. This is particularly helpful when directing Shakespeare, since his plays often require modern viewers to suspend their disbelief.

Shakespeare also brings specific challenges, such as knowing when to cut away from the character who is speaking to show the reaction of others on stage:

“It really does help to see the person talking when you’re watching Shakespeare, so you have to be careful not to cut away for too long.”

In the play, stage directors can ‘steer the audience to the right realisations,’ Indra explains, ‘but with the camera, you can really help to point things out’. This includes how you might represent the themes of the plot in the very angles and locations that you choose. Indra talks about the Venetian Masked Ball scene in Much Ado as an example of this, where making the audience aware of the deception going on is where much of the entertainment comes from:

“During the masked ball, everyone is claiming to be someone else, and in this production, for the first time (that I’ve ever seen it), the crew made masks which really, really worked. When the masks were on, apart from the voices, you really didn’t know who was talking. So then it was up to me to get the angle right, where you could see the mask, but you could also see the character behind it.”

Indra prefers to give specific advice in response to the questions that his students have, but he did share a couple of more general pieces for aspiring filmmakers.

2.    While it is helpful to know what you want to do from the start, you should also be flexible: ‘I don’t know anyone who’s gone straight from film school into their first feature. Most of us have to do other things, like corporate or online content. Nowadays, there’s much more opportunity for you to get started with smaller jobs.’

3.    Make sure you don’t just study film, but that you are also getting experiences or insights into the world that you want to share through the films you make: ‘Even now, when you go to Stratford Upon Avon, where Shakespeare was, you think, what did he see? He was one of those rare geniuses who picked up on human beings and how we react.’

Watch the trailer for the Royal Shakespeare Company’s Much Ado About Nothing!