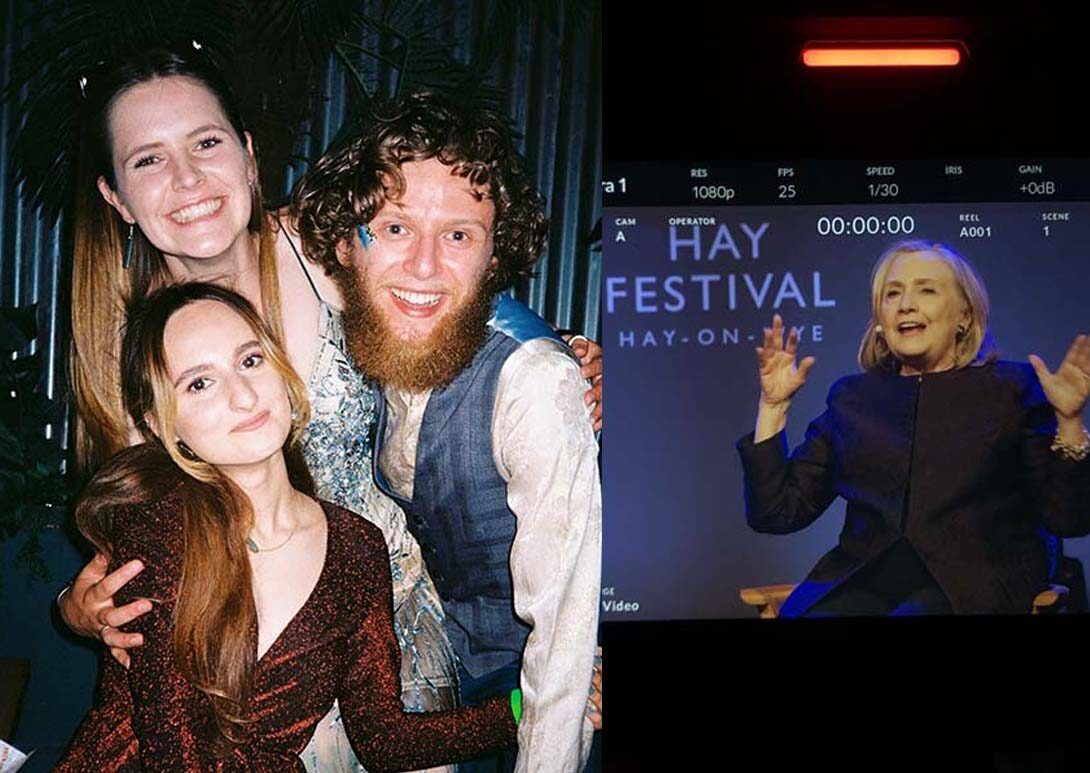 After applying for a Covid Marshal position on an unknown ‘upcoming drama’, Charlotte Smart found herself transported back to the 19th century, ending up on set of The Essex Serpent, the Apple TV+ miniseries starring Claire Danes and Tom Hiddleston, directed by Clio Barnard.

Now in the final year of her BA Content, Media & Film Production degree, Charlotte is continuing to gain industry experience, most recently working as a camera operator at Hay Festival, one of the world’s biggest literature festivals held annually in Wales. The 2022 Festival included events and talks from Hillary Clinton, Benedict Cumberbatch, and children’s author Jacqueline Wilson.

How did you get involved with The Essex Serpent?

I noticed a job advert on the MetFilm School Weekly Digest to be a Covid Marshal, so I thought I’d try my luck and I applied. I got a quick response, and needed to be at a London location for 5am the very next morning!

What was the on-set experience like? Any top takeaways for aspiring producers?

Getting to step back in time to 1890 was definitely the coolest part. The London streets had to be paved with gravel to replicate old streets, and the actors and extras were all wearing period dress. It was also pretty surreal sitting in a hotel lounge watching the Euro 21 with Frank Dillane (who played young Voldemort!). Another highlight was attending my first wrap party, which was a lot of fun – especially since Covid restrictions had just been lifted!

As a Covid Marshal, you’re not the most popular person on set, but I would say try and not take any comments to heart. Not many people want to wear a mask or face covering, but you’re there to keep people safe, and to make sure production doesn’t lose any shooting days. Try to be friendly with people and gain a rapport early on.

With The Essex Serpent being a period piece, were there any specific challenges you faced during filming?

From a Covid standpoint, there were a lot of old, small locations with confined spaces – such as the old operating theatre, and the basement of the old cottage. This made social distancing difficult, so I had to be vigilant with sanitising surfaces.

Many people were also reluctant to wear face masks, and it was tricky for those with updos and facial makeup, but we tried to overcome this with face shields and daily testing.

Alongside this, you’ve just finished working as a camera operator for Hay Festival. How did you find working a live, multi-day event?

Camera operating at Hay Festival was really cool. I love working for Bubble Production – which is how I got involved, and it was fun to offload what I’ve learnt to the new students – and even try my hand at directing for the first time! It involves some problem solving to ensure that you always have a wide shot to cut to, and also some psychology to ‘predict’ when the next person is going to speak or interrupt, so that you’re ready to catch that person talking.

Filming live events is also intense, as any mistakes will be seen by the audience straight away. I was definitely sweating when it came to filming Hillary Clinton and Jimmy Page from Led Zeppelin!

Gaining experience in these different industry areas, what would you like to explore next?

I’ve always preferred real world, non-fictional stories such as documentaries and live events, but having worked on The Essex Serpent, I feel like my eyes have been opened to more fictional content. I wouldn’t mind working on drama again now, perhaps as a camera trainee.

I’m also keen to work as an Environmental PA or Manager at some point, as I have a real passion for sustainability, and it’s now fundamental that we move towards making productions as eco-friendly as possible.

How do you think the variety of your MetFilm School course helps you to experiment with different craft areas?

In each semester, I have had the opportunity to work in different roles, and this has allowed me to figure out what I enjoy the most, as well as some of the responsibilities associated with each position, such as creating shot lists, call sheets, storyboarding, and filling out risk assessments. I think it’s good to push yourself to try different roles, because it helps to give you a better understanding of the entire process, and how you may be able to help make someone’s job easier in the next production.

Finally, what’s one piece of content that has inspired you lately?

Well, The Essex Serpent of course, because it’s cool to recognise the sets or see how they’ve made a location look so different with effects. I haven’t had much opportunity to sit down and chill lately, but I’m looking forward to watching the new Stranger Things. I’ve also heard both Ozark and Everything, Everywhere All at Once are very good, so they’re next on my list!

Watch the trailer for The Essex Serpent