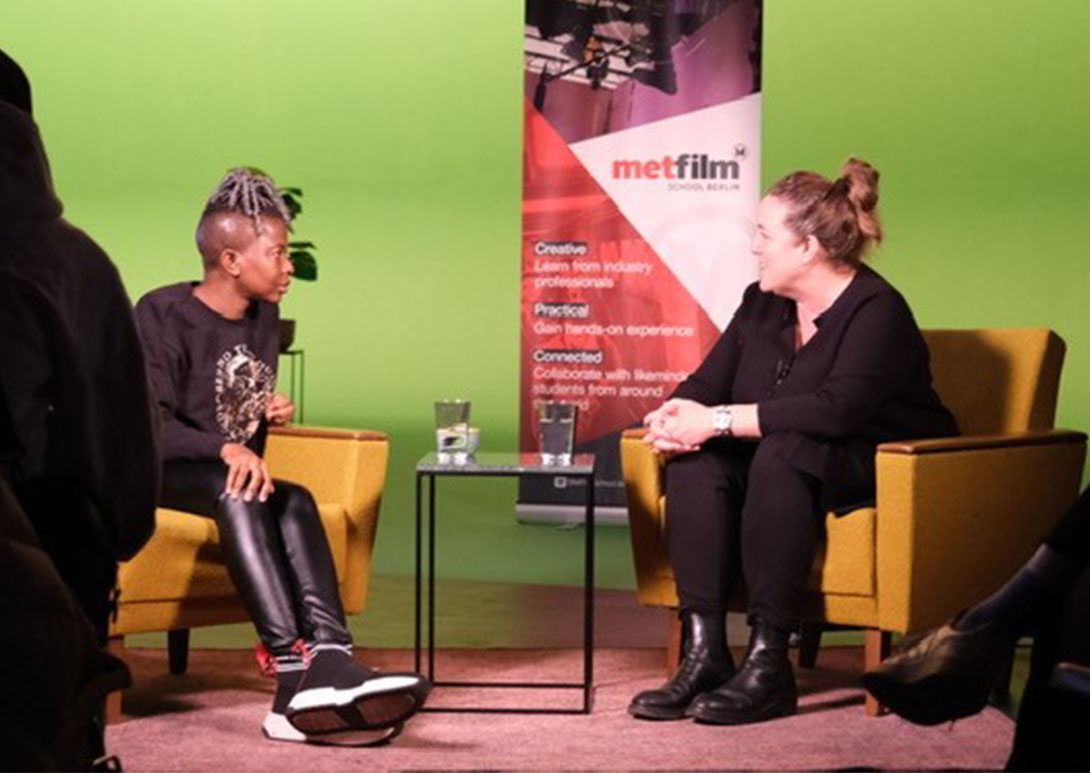 When showrunner Anna Winger arrived at MetFilm School Berlin, she was pleasantly surprised to find that she recognised BUFA Studios, having worked in ‘the next building over’ back in 2014.

At this time, Anna was working on Deutschland ’83, the first in a trilogy she created with her husband, a television writer and producer. The success of ’83, which won ‘Best Miniseries’ at the Golden Camera Awards, was quickly followed by ’86 and ’89, the latter released in 2020, coinciding with her next project: the 13-time award-winning Netflix series Unorthodox.

Based on the memoir of the same name by Deborah Feldman, Unorthodox tells the story of an ultra-Orthodox Jewish woman who flees an arranged marriage. On the back of this project, Netflix signed a multi-year partnership with Anna and her company, Airlift Productions. Her next series for the streamer, Transatlantic, is currently in post production, and the crew included BA Practical Filmmaking graduate Tunde Aladese as ‘Writer on Set’.

It only makes sense then, that when Anna Winger joined us for a recent MetFilm School Masterclass, it would be hosted by none other than Tunde. Keep reading for our top takeaways from the session…

Anna started the session saying that she felt her story was ‘a great one for women who ask themselves about their career trajectory’. Producing her first show in her early forties, it was only then that she really found what she was truly ‘meant to do’.

The journey to this realisation began back in the United States, where Anna studied film at Columbia (which she describes as a surprisingly Eastern European education, thanks in large to Director Miloš Forman, who was then co-chair of the film department). After graduating, her career changed direction, and she worked as a photographer for the next 15 years.

To Anna, the worlds of photography and television overlap a great deal, especially for creatives starting out:

‘You have to take every opportunity you can’, she explained. ‘This means shooting kind of “stupid” things, because you can still learn the technical aspects. And with that, you feel in control of making the ideas in your head a reality. There’s a lot of that in television making.’

She continued, ‘There’s an incredible thing that happens as you gain confidence. It makes you a better writer, a better producer… it even makes you better at pitching, because you’re able to say, “this is what I want to do, and this is how we’re going to do it”. That’s confidence-inspiring, which is half of the process.’

It was while staying home with her two young children that Anna was drawn to write for the first time, and she credits her debut novel, This Must Be the Place (described by the NYT Book Review as ‘stealthily original‘) as the ‘first step in [her] transition from being a visual artist to a writer’. From here, she quickly landed on screenwriting as the perfect marriage between the two artforms, and her career as a writer, producer, and eventually showrunner, began.

Watch the trailer for Deutschland ’83 by Anna Winger

What it means to be a showrunner

As a showrunner, Anna produces the projects that she creates and writes for. When explaining the difference between a ‘showrunner’ and a ‘television writer’, she shared that, to her, unless you can produce your own work, you lose control over the story – especially when it comes to television, which she considers a particularly writer-driven medium.

‘In television, it’s truly a question of how you weave the narrative from one episode to the next. If you don’t have a writer in charge of that process, I think it’s very difficult to get it all done.’

This also influences how she sets up her productions: following in the style of many American writer’s rooms, the writers on Transatlantic were also producers on the show, Tunde included. To Anna, the collaborative atmosphere of the writing process is absolutely essential on-set, because it allows for continued criticism and self-correction. Dialogue that doesn’t quite work, or scenes needing to be adapted due to budget constraints, these are all changes best kept in the hands of those who know the story inside-out, the writers.

‘As a showrunner’, she added, ‘there is also the feeling that the buck stops with me’, and so by inviting writers to produce, ‘I am constantly supported in the decision-making process’, something she describes as ‘extremely fulfilling, because you can see the thing get better’.

Watch the trailer for Unorthodox, available on Netflix

During the Q&A portion of the session, one of our students asked if Anna has plans to direct any of her projects in the future.

‘I think I would find it easier to direct something that I didn’t write’, she responded, returning to the collaborative nature of her projects to explain her opinion.

‘To me, the conversations you have with your directors are all part of the self-correction process. If no one is challenging your vision, then you’re just on your own, and I don’t want to do that.’

This led to a larger point about the growing pressure on young filmmakers to do everything, to establish themselves as ‘auteurs’ who write, direct, produce, and star in their own work. While many of our students juggle multiple hats while making their early portfolio, Anna pointed out that the number of people who manage this throughout their career, and who manage it to a high standard, is extremely small.

Instead, she emphasised the gratifying feeling that comes with working alongside a trusted team to create something you can all be proud of. ‘I think that to expect one person to do everything, or to expect that of yourself’, she summed up, ‘is kind of dangerous’. 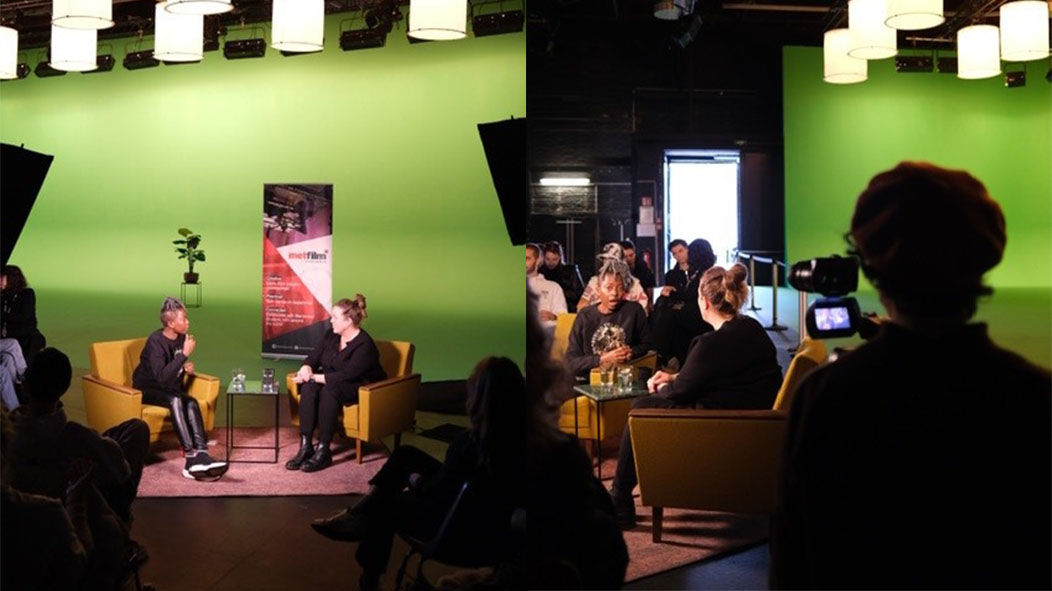 Highlights from our Q&A with Anna Winger

How did you approach adapting Unorthodox from its source material?

‘When I spoke to Deborah, she told me to do whatever I wanted with [the memoir], and so, in the end, probably 80% of the show is made up. First, we took the book apart, and decided which parts it was important to use. After that, we started plotting it out as if it was fictional material. We took the characters, and the suggestions of characters from the book, and we activated them on the screen.’

Can you share any advice for students looking to write for television?

‘My advice is to take any job you possibly can that allows you to get closer to the process. The obvious job for that is a writer’s assistant, because then you really see how something goes from being just an idea, to being an on-screen artefact.’

Do you already know the types of shows you want to continue making for Netflix?

‘So far, we’ve made two shows – Unorthodox and Transatlantic – and both of them have an unusual hybrid cultural approach. So, I guess I’m interested in a cross-cultural approach with my work, but primarily, I’m interested in making entertaining television. You can build something that includes a history lesson, or an interesting message, but it primarily needs to be entertaining in order to bring people in.’