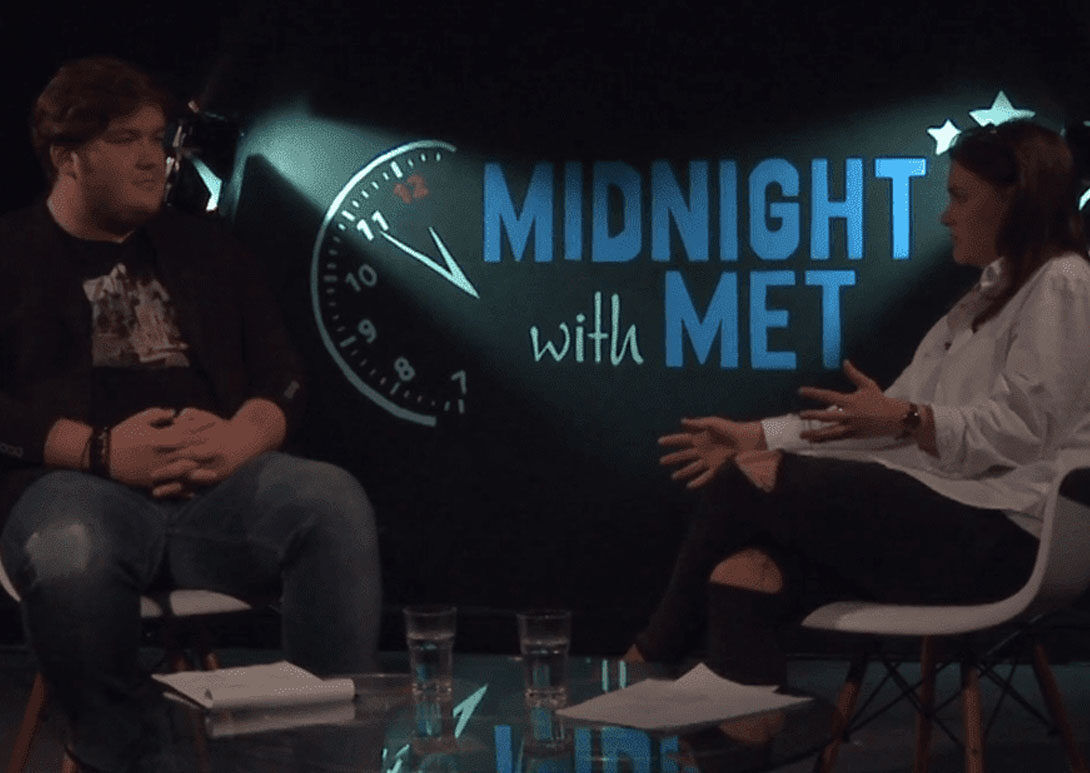 While is it often either their graduation or personal projects that students choose to take to festivals, sometimes the quality of the course work itself is worthy of attention; something that was certainly proven this week when Midnight with Met was crowned Best Student project at the 2nd Annual Web Series Festival Global.

Astute MetFilm followers may have noticed us previously celebrating the creative success of Midnight with Met – a postmodern, multi-camera live-TV project that is created by our BA (Hons) Practical Filmmaking students. Each new cohort taking the course must develop a fresh interpretation of the classic ‘magazine show’, one that ‘strives to showcase talent – both British and foreign – and bring to light culture and counter-culture in a humorous talk show environment’. Uniquely, the content is also self-referential, with on screen conversation frequently focusing on the show’s very creation and the students’ learning experience.

The recent award came about as BA student and aspiring Producer Gemma Pope Scarascia felt her class’s work had real merit, and therefore decided to take the initiative to begin submitting the first episode to various festivals. Currently the LA Indie Film Festival and Screenplay Competition, Independent Television and Film Festival and New York Television Festival are considering the entry. Speaking about her decision to begin submitting the series, Gemma says she “believes we have a strong chance in being nominated or even winning the others“, and that the process is a “great way to get your name out there, build relationships and get experience.”

Gemma and fellow student George Apostolou co-produced this recent incarnation of Midnight with Met, helping shape four 35-minute episodes that each showcase independently sourced musicians and comedians. One such example is the rising singer/songwriter Nadia Rae who was interviewed and performed in an episode of the show. Watch her segment below.

Flatmate – Series within a Series

In addition to the performance segments that make up Midnight with Met, students are also required to create an entire sitcom series that will be featured in each MwM instalment. Flatmate focuses on two modern females who, due to a rent increase, are forced to start seeking an additional housemate, but find themselves meeting a bizarre variety of inappropriate candidates. The sitcom’s themes are typically contemporary, and focus upon the everyday concerns of a 20-something city dweller: racism, health, love and rejection, religion, community, friendship and money.

The show was conceived, written and directed by three female students (Hannah Walti, Hanna Nygren and Yukie Mochizuki), which, coupled with the show’s strong female characters, have given Flatmate a strong feminine voice, something that Gemma recognised and which inspired her to wisely also start submitting the series separately to particular festivals that specialise in female focused content. So far the series is in consideration with the Los Angeles Film & Script Festival, Dublin Web Festival, Toronto Independent Film Awards, NYC Web Fest, along with other worldwide contests. You can watch the first episode below.

Speaking about the fast paced nature of the module as a whole, BA student and aspiring Producer Gemma Pope Scarascia said “you’re never working on the same thing: one day is locations, the next is castings, or budgeting and scheduling. It never gets boring! It gives you the base for any future production job“.

Would you like to work in the screen content industries? These students were studying on our BA (Hons) Practical Filmmaking course. Download a prospectus to learn more today.