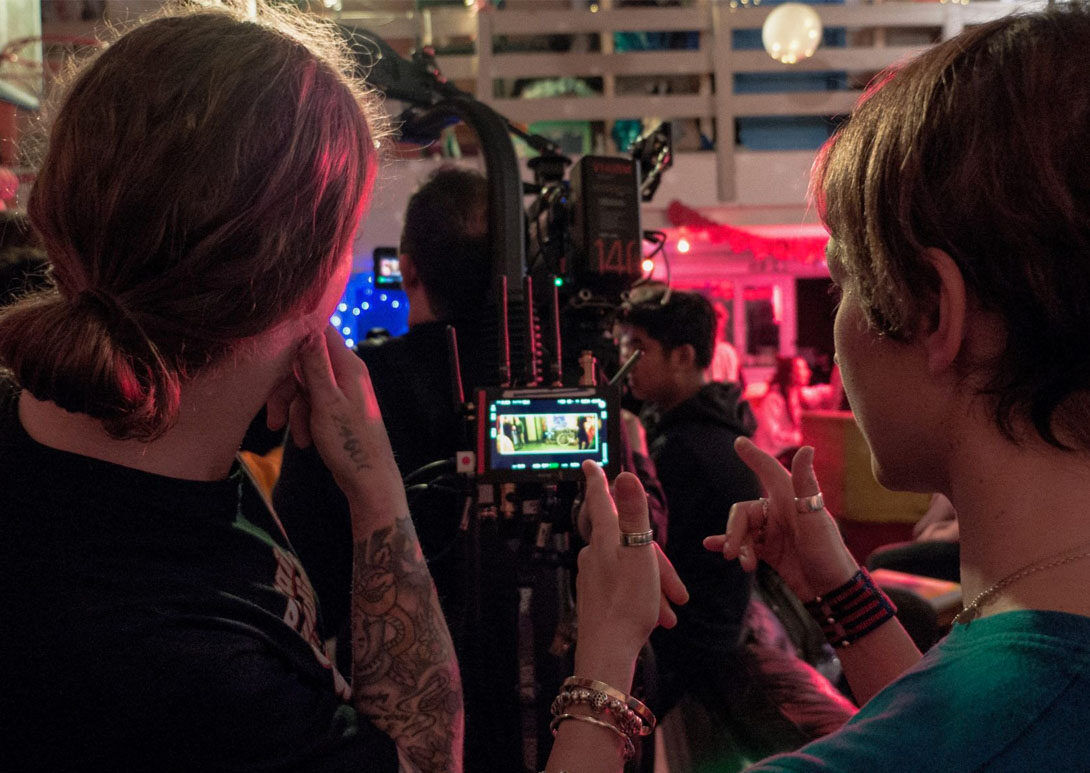 With stories being told through more mediums and formats than ever before, it’s certainly an exciting time to be heading into the creative industries. One MetFilm School graduate who has succeeded in balancing projects in various forms is MA Directing alumni Vicki Kisner.

Over recent years she has been involved in acclaimed television dramas for both adults and children, Hollywood productions and a number of social awareness films. All this in addition to creating her own award-winning short films, with a first feature film also in development.

Vicki joined the School back in 2014, with her full tuition fees covered by the Voices That Matter Scholarship, now offered exclusively for women in the screen industries in partnership with MTV Staying Alive Foundation. Applications for this year’s Scholarship close on Thursday 7 May 2020.

We caught up with Vicki to find out how her career has been going since leaving the School, and what tips and opportunities she has for other aspiring film school students heading into the industry…

What initially inspired you to follow a career as a director?

I’ve always had a good imagination, loved telling stories and relished watching movies growing up, so was naturally led into this arena. But it was during the making of my first proper short film, Human Territory, which was shot on 16mm and edited on a Steinbeck, that was really the moment I knew I wanted to be a director. This was my final project while doing my BA degree twenty years ago and I loved every part of the process. If you feel like immersing yourself in a strange fantasy from my 20-year-old brain then you can watch the film here.

So far you’ve been involved in projects of assorted styles and scales – do you feel variety is important to you?

I enjoy different mediums as they all boil down to one thing, which is serving a story. So whether it’s a short film, feature film, pop promo, awareness film for mental health or kids comedy/drama for Television, it’s an opportunity to immerse the audience in a world which you have had a hand in creating with characters, compelling drama and hopefully insight into the human experience. I really enjoy the variety, as it allows you to continue to hone your craft, learn new skills, be adaptable and most importantly to serve diverse stories with a unique approach each time.

What can you tell us about your experiences of shadowing the sets of several celebrated British dramas?

I have been lucky (and determined) enough to shadow on a variety of different productions such as CBBC’s The Worst Witch, So Awkward and continuing dramas Hollyoaks and Emmerdale. I gained so much and learnt how Multi-Camera and Single camera sets operate, what skills the director needs for each different scale of production and what it’s like to work under huge amounts of pressure. Continuing drama sets, in particular, are very fast-moving with tight schedules so they run like a very well-oiled machine. The CBBC productions are also incredibly ambitious, challenging and run a tight ship so it was insightful for me to be on these different sets in so many different ways. All these experiences helped prepare me for my first broadcast directing experience.

You’ve recently been directing episodes of CBBC series The Dumping Ground – has it been exciting to create for a younger audience?

It was an amazingly enriching experience and I loved creating stories for a younger audience. There was so much freedom and creativity to express different ideas and it was a very nurturing environment to work in. The cast and crew were incredible and, since lots of them have been working on the show for years, they really know the style and pace and were very supportive. Each episode focuses on several storylines (there is always an A, B and slightly more minor C storyline), each with a different message, tone and feel to them so there is real freedom to serve the story in new, exciting and different ways. I really enjoyed being in the edit room and letting the creative juices flow!

How do you balance nurturing your own filmmaking projects with work on other productions?

I am in the process of writing my first feature film and developing a couple of TV drama series ideas, so in between directing gigs, working as a Clearance Coordinator on big studio films (Wonder Women, Mission Impossible – Fallout) to earn money and hustling for new directing work, I am spending time on my own projects. It’s tricky to find the balance sometimes and creative focus can be a bit of a challenge. If I’m preparing for a big interview for a directing opportunity or I’m in prep for The Dumping Ground for instance, then all my attention will go on that and I will immerse myself 100%. At those times I don’t have much time or creative space to focus on my own projects so will have to leave that and come back to it.

Your celebrated graduation film Sheila continues to be a calling card for your as a filmmaker. What advice would you give to our students working on their own shorts?

I decided to make a film which was very personal to me and it was set and shot in South Africa where I was born. It was a huge undertaking to shoot abroad for my graduation piece and took immense amounts of effort and preparation. I’m really proud of what we achieved. It was absolutely worth the effort so I would say be as ambitious as you can, but always stay true to yourself and focus on a story which you are passionate about.

Finally – are there particular schemes and opportunities within the industry which you would encourage aspiring directors to take seek out?

Directors UK are constantly facilitating a number of schemes for directors throughout the year and being a member has been vital to my career progression. They collaborate with BBC Writer’s Room and various other productions for shadowing opportunities and also run the Inspire Mentoring scheme where they pair you up with an industry mentor and offer support and financial assistance during the mentorship. They also run the Alexa Challenge where I was selected to make my short film Pulling which is also part of my calling card and helped in securing my agent. They are an incredible resource.

Vicki Kisner graduated from our MA Directing in 2015 and is represented by Nick Turner Management here. You can check out her list of credits on IMDB.

Watch the trailer for Sheila here