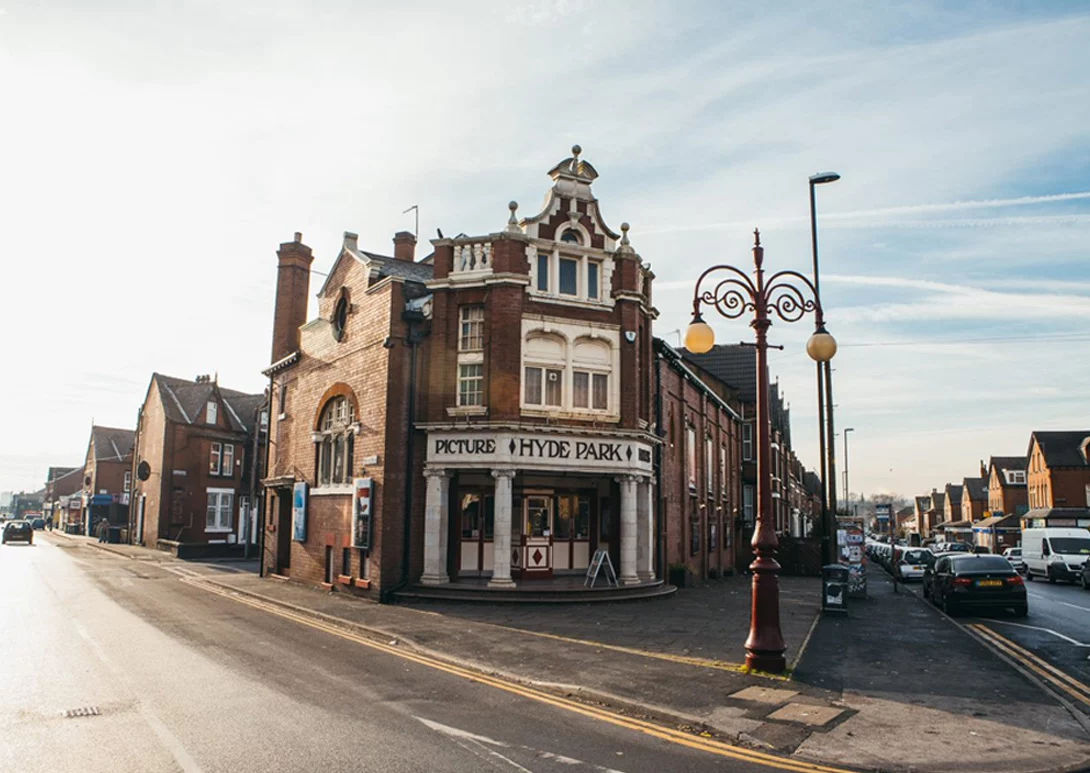 ‘Going to the cinema is the ultimate escape experience’, shared the team at the Hyde Park Picture House. ‘The parting of the curtains, the dimming of the lights… it begins a transportation into another world. Whether it’s shared fury or awe, there’s something extremely powerful in the simultaneous connection and disconnection that cinema offers.’

At MetFilm School, we completely share this appreciation for the act of cinema-going, and that’s why we were delighted to speak to Hyde Park Picture House for the latest installment of our Follow our Leeds series. Having announced this week that they will be reopening in April 2023, Hyde Park Picture House have also launched their new membership packages, all found on their new website. Read on to learn more about the cinema’s recent renovations, their community-oriented projects, and the wider creative scene in Leeds…

For Leeds newcomers, can you share a little about the legacy of Hyde Park Picture House?

The Hyde Park Picture House is the only gas-lit cinema in the country. It’s a Grade II listed building in the bustling community of Hyde Park.

The cinema first opened its doors in 1914 (we recently celebrated our 108th birthday!), screening newsreels and films to boost morale during the war. The cinema has welcomed all kinds of visitors since then – an elephant next to our iconic red streetlamp in 1959, and more recently, Helen Mirren acted in a scene for The Duke here.

The cinema has been under major renovation – what do we have to look forward to?

One of the key reasons behind the renovation was to preserve the incredible features of our historic building. As well as popular features like our flickering gas lights being restored, our Edwardian walls and original terrazo tiles in the foyer will be given new life.

Inclusivity is central to our ethos, so we’re grateful for funding from the Heritage Lottery Fund, Leeds City Council, and passionate supporters of the cinema which has finally made it feasible to make all areas of the building accessible without steps. Our new cafe/bar area will hopefully transform the cinema into a place that can always welcome people.

We saw your #TreasureTrashTuesdays on Instagram – what’s the craziest thing you found while renovating?

One of our favourite discoveries has been an Edwardian-era hat pin, found under the floorboards right at the back row of the balcony (which seems like the best choice of seat for hat-wearers!). Looking into the history of similar hat pins was fascinating, they became a symbol of women’s safety, since they could be used for self-defence, and in 1908, laws were even passed limiting the size of pins due to patriarchal fears of them being used as defensive weapons.

Most commonly, we’ve found cigarette packets from the past that look a lot more glamorous than today’s, and remind us how much society has changed since the Picture House’s establishment.

As your ‘On The Road‘ Screenings have shown, Hyde Park Picture House is a central figure in the Leeds community. What do you think the cinema represents to the city?

Our hope is that people see us as a place committed to diversity, community, and friendliness. We try to keep our hand-selected films interesting and representative of the rich variety that the world has to offer. In turn, we hope all will feel welcome and excited to see our films. For example, within our Cinema Africa! strand, we celebrate African cinema, which has been historically underrepresented. The strand is curated by Mosa Mpetha, in consultation with a local African advisory group. Opportunities like this make communities around us part of the conversation of curation.

Community is a very important part of who we are, and we’re thankful to the friendly organisations who have opened their doors to us to allow our work to continue On The Road.

You’ve recently been working with the Yorkshire Film Archive to create the ‘Memory Bank’, to support those living with dementia. Can you share more about this project?

Supporting people with dementia is really important to us, and is why we run Memory Matinee screenings for people with dementia and their carers, friends, and family. Our Memory Bank project allowed us to provide film reminiscence resources to people in their own homes. Archival footage in Leeds may trigger cherished memories and open up discussions aided by the supportive notes provided with each DVD. The positive feedback we’ve had from this project has been really lovely to hear.

Another community heritage project we’re proud of is Hiding in Plain Sight – we recommend checking it out if you’re interested in the ‘lost cinemas of Leeds’, or if you’d like to explore Adam Allsuch Boardman’s fantastic illustrations of them!

The abundance of creativity in Leeds is something that sets it apart from other cities. We have so much to be proud of; Leeds is the only city outside of London to have its own resident opera and ballet companies!

Despite the vast quantity of creative organisations, Leeds creatives are known for being supportive of one another, rather than competitive. We may not have survived as a cinema if we didn’t team up with our sister venues, City Varieties Music Hall and Leeds Grand Theatre, and each of us have been enriched by this relationship.

Finally, what’s one thing our students should know about the Hyde Park Picture House?

For anyone aged 15-25, we recommend signing up to our free 15-25 membership. Members can have access to specially discounted £5 tickets, including when the cinema reopens in Spring 2023, as well as invites to special events and other exclusive offers.