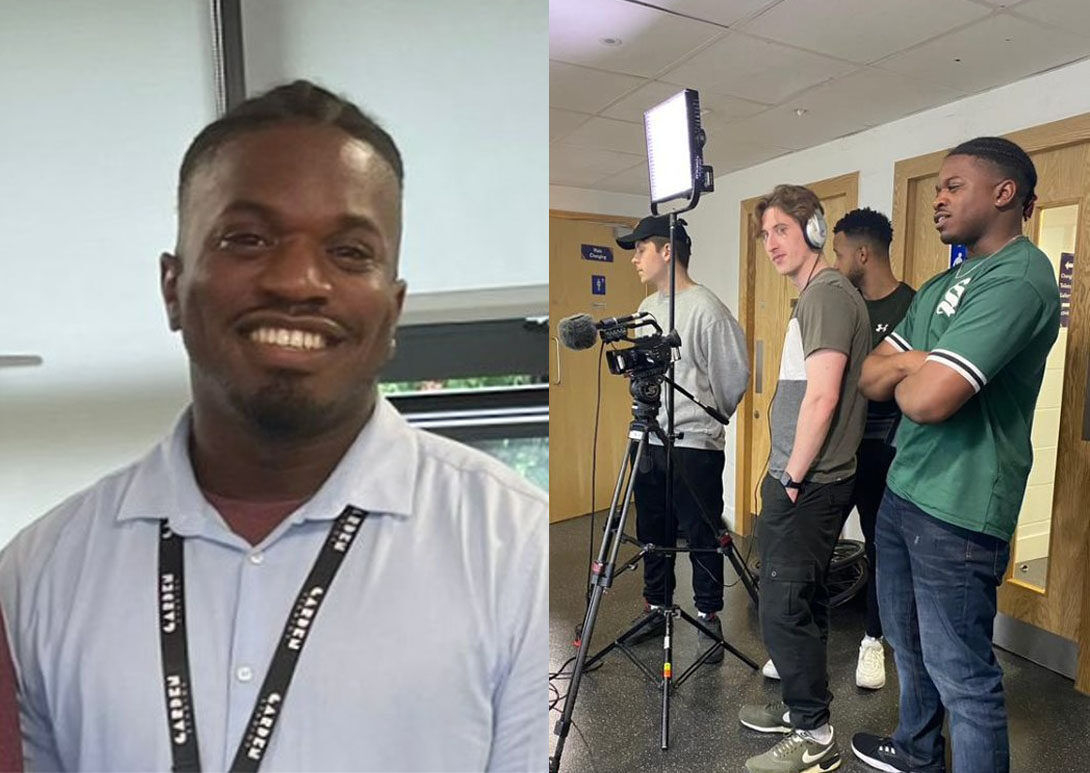 In 2021, MetFilm School announced a unique partnership with Garden Studios, which includes running our Certificate in Post Production and Certificate in Digital Animation & VFX courses at their West London space. Practical opportunities are only going to increase over the coming years, with Garden Studios CEO and founder Thomas Hoegh announcing an additional Virtual Production stage, as well as three Virtual Production bays – ‘expected to be operational by August for MetFilm School students based at the site’.

As a Facilities Assistant to the team at Garden Studios, Harry is just one of many MetFilm School students getting the opportunity to enter the industry while they study. In today’s blog, we learnt more about his introduction to this craft, as well as the films and shows that have shaped him as a creative filmmaker.

Can you tell us a little about your role at Garden Studios?

What I love about my job is that, on most days, I wake up in the morning and I’m unsure of what the day ahead will hold. I’d say an average day would be helping with event setups on the Virtual Production stage and moving furniture from one building to another – that sort of thing.

I’m not necessarily involved in any aspects of filming, but I get a front row seat – which isn’t a bad alternative!

Garden Studios is known for its Virtual Production work – is this an area you always wanted to go into?

To be honest, before working at Garden Studios, I had no idea about Virtual Production. I knew about the green/blue screen used primarily in big-budget productions, but on my first day, I was introduced to all the different aspects and complexities of it all.

I’d say that the future of film definitely belongs to Virtual Production, so, whereas I wasn’t aware of it before, I would definitely say I’m interested in it now.

How has seeing behind-the-scenes of Virtual Production changed the way you view VFX-heavy projects?

It’s made me more aware of what VFX entails. It’s so fascinating to see the finished product after witnessing the process that goes on beforehand. When watching films now, especially with the Marvel Cinematic Universe being so prominent in cinemas these days, I can differentiate between what would have been filmed on location, and what would’ve been done on a stage.

From a filmmaker’s perspective, it’s definitely worth knowing the ins and outs of Virtual Production. As a film lover though, you may have a better cinema experience without that extra knowledge!

How has your course at MetFilm School contributed to your learning in this role?

When I joined Garden Studios, I was sort of thrust into this pool of knowledgeable people who already knew film, Virtual Production, and all the technicalities that come with these things. I would say that MetFilm School helped when it came to learning the core basics of film, which has really benefitted me as a beginner in the industry.

Do you have a standout memory or lesson from your course so far?

Our project for the first semester of BA Content, Media & Film Production involved producing a short film signifying a ‘journey’. My group came up with the idea of an actual train journey, which involved a lone passenger meeting different personalities on a train. I’d say a standout memory was actually filming on a moving train – I found the experience so fun.

What was funny about it, for me, was that on a normal production, they would most likely just film in a still train carriage, and put a moving picture in the background. But we filmed on an actual, moving train. Talk about dedication.

From your time at MetFilm School and now Garden Studios, what types of stories do you find yourself drawn to now?

I’m definitely drawn to more thought-provoking stories which really push the boundaries. I feel like it’s becoming increasingly difficult to be a writer or a filmmaker and to fully express your thoughts, without the added pressure from society’s views of what is and isn’t ‘controversial’. That being said, as an aspiring writer myself, I’m hoping to explore ways in which the most controversial views can be expressed in the most subtle ways.

Finally, if you had to pick three films or television shows that define who you are, which would you choose?

This is a tough question because there are just so many to pick from!

The first one I’d pick is Coach Carter. I can relate so much with both Samuel L. Jackson’s ‘Ken Carter’, and Rob Brown’s ‘Kenyon Stone’. I feel like Stone was an outsider as well as a people pleaser, in his own way. I instantly felt a connection with him from start to finish. Ken Carter, on the other hand, was such an authoritative figure, but he also had a comedic side to him – which reminded me of my father. I could resonate with the relationship they had.

Next, I would go with The Walking Dead. This involves a group of individuals who may have had no prior connection with one another before an outbreak hits. I feel like watching this as a young teenager kind of taught me the ‘fight or flight’ aspect of life, as more often than not, the real villains are actually other humans.

Finally, it would have to be my all-time favourite: Terminator 2. It’s a weird one, because I wouldn’t say it describes who I am, but it did shape who I am in terms of it being one of the first films I ever loved. My love of film really grew from there.