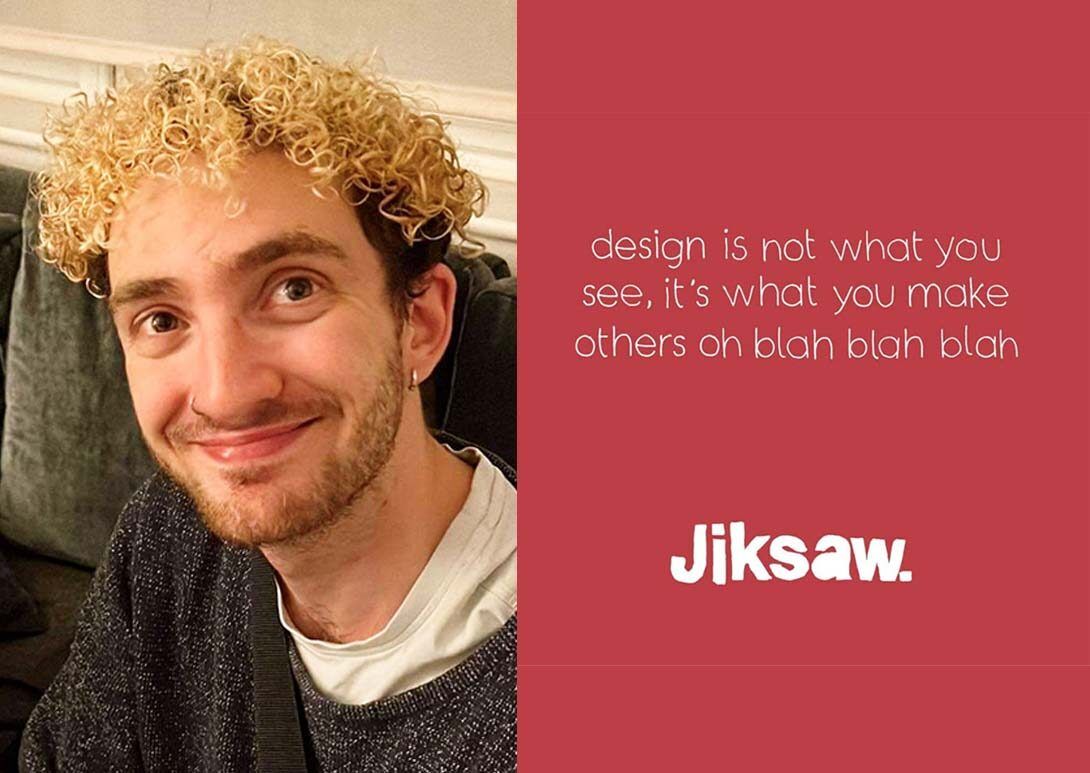 Since graduating from our MA Screenwriting course, Jonah Moore has joined Jiksaw, a creative agency where he now works as Project Manager. As well as this, Jonah has been keeping busy working on freelance projects for companies including WatchData, who have over one million subscribers on YouTube.

Today, Jonah joined us to talk about life at Jiksaw, what makes ‘good writing’, and the film that has inspired him lately…

What does an ‘average’ day look like as a Project Manager at Jiksaw?

I feel incredibly lucky that every day at Jiksaw is different, but what remains consistent is that, regardless of what day it is, I get to take ideas from scratch and then work with my team to bring them to life.

We spend a lot of time brainstorming creative ideas, and then jumping straight into the studio to make them happen – whether that’s designing tour posters, filming promotional videos, or building entire marketing campaigns!

Do you have a favourite project you’ve worked on so far?

As a stand-up comedian, Milton Jones was always one of my idols growing up. Being able to collaborate with a genius (and a world-class wordsmith) is a real dream come true for me, and has also inspired me to get back up on stage.

Jiksaw’s work for clients helps them to develop their own ‘brand’ – do you have any tips for ‘brand building’ in the industry?

One of the best ways to develop a brand is to put at its centre the uniqueness of the project, and then grow it out from there. If the USP is at the heart of what you’re building, then it’ll always stand out, and it’ll be impossible to replicate by anyone else.

Can you share any standout lessons or memories from your time on the MA Screenwriting course?

The best lesson I learnt was to read, read, and then read some more! You should read all of your classmates’ scripts, and read all the scripts of your favourite films. There won’t be a script where you won’t learn something, whether it’s good or bad. You will either be influenced to add a skill to your writing arsenal, or learn of traits that you should stay away from.

From your freelance work with WatchData, do you have any tips for content creation?

What I’ve learnt from WatchData is that the best creatives often don’t work alone. They take other peoples’ ideas and elevate them in order to achieve exceptional results. I always prefer to write with a writing partner, and I would encourage everyone at MetFilm School to form as many collaborations as possible!

Jonah Moore worked on this video for WatchData, a popular YouTube channel with over one million subscribers!

I always hear a lot more about structure and formatting than about creating a great reading experience. Excellent writing should pop off the page and form images in the reader’s mind. For example, there’s a difference between…

A lit up medieval torch. It burns brightly!

The torch slowly descends and –

SWISH! A swing of the torch SLAMS into the darkness and instantly engulfs a body in flames.

Out of nowhere, a medieval torch sets fire to a second fighter who quickly burns to death.

Scripts are often infamously hard to read, so the best way to stand out is to use the pages to put on a show!

Finally, what piece of content has inspired you lately?

This one is easy for me. The only time I’ve seen an accurate representation of my childhood on screen was when I recently saw the film Like Stars on Earth. However, it’s not what you think. The film isn’t about a goofy Jewish kid from North West London. Instead, it’s about an 8-year-old boy in India, living in a world that doesn’t understand him. A world that doesn’t understand dyslexia.

Like Stars on Earth is a beautiful movie that allows an audience to see vicariously through the eyes of a misunderstood kid. A kid who sees the world differently, but has his own unique set of skills and talents. It’s a film that epitomises why I decided to become a screenwriter: to tell personal stories that resonate with people on the other side of the world.

Simply being able to write was once a dream for 8-year-old Jonah. Fast forward to today, and I have graduated from MetFilm School with a distinction in MA Screenwriting – and I work full time in the entertainment industry!

Watch the trailer for Like Stars on Earth here!